Oh did I shop! We went to Whole Foods and I stocked up on some things we were low on. I wanted to get some Amy's Texas Burgers for the BBQ. I also got more taquitos. We really liked those when we tried them a couple of months ago. I grabbed some Thai Kitchen rice noodles because I seem to have a hard time finding the President's Choice ones that I like. I also spotted some Sol Cuisine frozen falafel and HAD to get a box. I really like Sol Cuisine. Their tofu is fab, and their spicy black bean burgers are spicy! They are also a Canadian company. Can you see the Tofurky sausages there? They might be my new addiction. 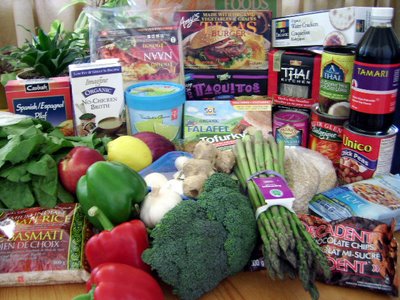 We stopped at Fortino's on Appleby Line on the way home just to grab some other odds and ends. I mainly wanted to get President's Choice new Naan bread. While we were there I grabbed some tofu, chocolate chips, basmati rice, lime sherbet and some very dirty romaine lettuce. And wouldn't you know....this Fortino's had the PC Rice Noodles that I have been looking for. The Thai Kitchen noodles were $3.29. The PC noodles are $1.29! But there was only one package left and it was pretty smashed up, so I left it. But now I know where they're hiding.
Also thrown into this picture was some quinoa and Scottish oatmeal, ginger, apples, lemons, mushrooms and a purple onion hiding there behind the lemons. The asparagus is Ontario's first of the season. It looked wonderfully fresh. Yea! Spring is here!

We were leisurely taking our time all day, so dinner ended up not being too spectacular. It was more like a weeknight dinner. I just threw together some mac & cheez, Zoglo's mini loaves (Jim's request) and some mixed veggies. I served Willie's Chili Sauce on the side. Mmmm, it's a sweet chili sauce - really good stuff. May not be too fancy, but was mighty tasty. 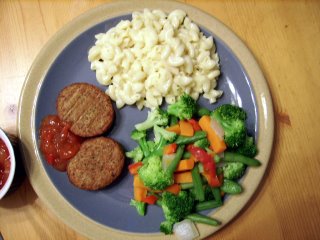 While we were at Whole Foods we spied 2 little cherry danishes sitting on the shelf all by themselves. We thought we should probably free them from the confines of that uncomfortable-looking wire basket and liberate them! They then became dessert! HA! HA! 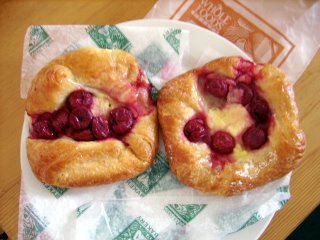 I am now off for a week's vacation (from both jobs!) I'm not going anywhere or doing anything exciting. Probably some cleaning and re-organising around here. When we moved I was in terrible pain with my back and not able to do much. I just sort of plunked things where ever and figured I'll deal with it later. I've put it off and put it off and have now had enough so I want to get things into shape. My kitchen desperately needs to be put in some sort of order. Doesn't sound like much of a vacation, but not having to go to work is blissful enough.

You may have just saved my life. As a vegatarian can you believe the food I miss the most is sausage!!!! Tofurky sausages! That is amazing.

Those danishes look divine by the way.

Carrie - Good haul at the grocery store. I just picked up some of the Ontario asaparagus today. It's on for less than $2 per lb at price chopper - DEAL! I can't wait to eat it!

wait - I meant to say Food Basics, not Price Chopper.

aww I'm sorry you had bad back pains

I'm sure those danishes were eternally greatful for you releasing them. hehe

You can pick your own room... but we like to be surprised and let them choose for us.

dragonslayer, as you can see, I found rice noodles! The Tofurky sausages are really good. I like the keilbasa ones the best, followed closely by the spicy Italian. The beer brats are just OK. I got them at Whole Foods. Go there now and get some!

Megan, I scored with the asparagus too. The bunch in the picture weighed in at $1.33. Can't beat that price.

Teddy, thanks for your sympathy. I'm afraid it's a chronic thing with my back. The danishes really helped ease my pain. hehehe :o)

Sarah, that place is just da bomb. I'm serious about those lamp shades. When I looked at that picture, they were the first thing I noticed and I laughed out loud. Hope you're having fun in TO!

Hope your back's back in good shape soon, Carrie!

Vacations are always fabulous, even when you don't go anywhere!! Bliss comes in all sorts of forms...

how did i miss this post with all this amazing food?! love it.