Whew! It's been a long time since I posted.
A week & a half or so ago, on a Saturday, we were going to go to the hockey game with my friend Allison. Jim & I are of course, Leaf fans & Allison cheers for Edmonton. Since the Oilers were in town, we had picked that game to go to. We didn't have tickets. They are extremely difficult to get most times, so we just went down to the ACC to see what the scalpers had. It's the best way to get decent seats really. When we had originally picked this day, way back in October, we didn't know that there was going to be a big ceremony honouring the '67 Stanley Cup champions, which is the last time the Leafs won the cup.

Also, Dave Keon was coming back for the first time in 40 years. Big long story, but this was going to be a big event. We thought we'd take our chances anyway. 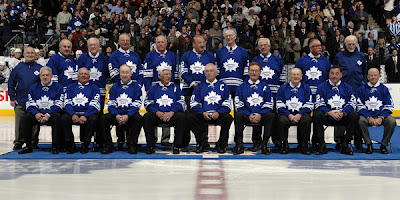 We quickly discovered that this was probably not going to happen. Ticket prices had soared and were completely over inflated. $250 for the cheapest seat. For a decent one, these guys were asking $600! Usually, $100 will get you a pretty good seat with a good view. No way were we going to pay $250 for nosebleeds. Our plan was then to waste some time and come back after the game had started and see if we could negotiate a better deal. By the time the game is underway, if the scalpers have tickets, they'll sell them cheap. What could we do for a few hours? 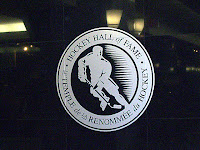 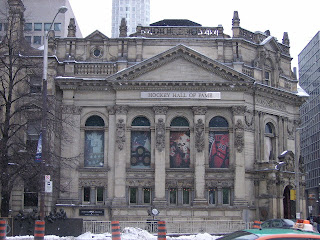 It's located at the corner of Front & Yonge Sts. in an old bank. I love the outside of this building! The City of Toronto has done a magnificent job in maintaining a lot of the historic buildings. The design of the city is such that the old looks good with the new. And anyone visiting that I've shown around a bit has always commented on the fact that for a very large city (pop. over 5 million) it's extremely clean. 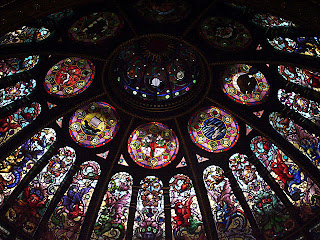 This shot doesn't do it justice, but this is the ceiling inside. The vaults are still there, so this was probably the main part of the bank where the tellers were and patrons would come do business. This is when they knew how to build impressive!
If you're a hockey fan, this place is great! It's so chock full of hockey information & memorbilia (except for the bathroom, which could have been "one of a kind", but was disappointing).

Anyway, we got to see the original Stanley Cup that is kept in one of the vaults and got to get up close to a replica. 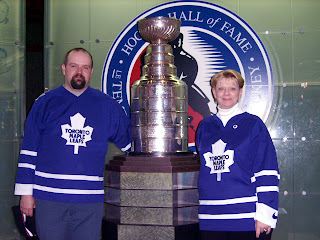 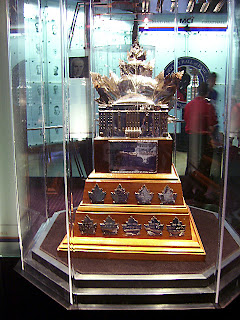 Above is the Conn Smythe trophy that is awarded to the MVP of the playoffs. Jim loves this trophy because it has a giant maple leaf on it and Maple Leaf Gardens. It was donated by Conn Smythe, obviously & you might remember a bit that I mentioned of him before. 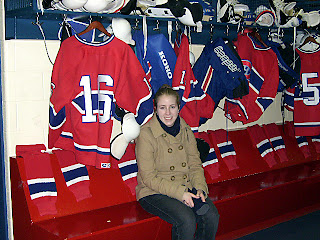 Here's a shot of Allison in a mock-up of the old Habs dressing room. We were looking for the showers, but alas, no luck.


It got to be dinner hour and we were all getting hungry. We walked over to The Old Spaghetti Factory, but they told us a 45 minute wait! Geez! I hate having to wait anywhere, let alone a restaurant, so we walked next door to Scotland Yard and got a seat right away and a TV we could watch the start of the game on. 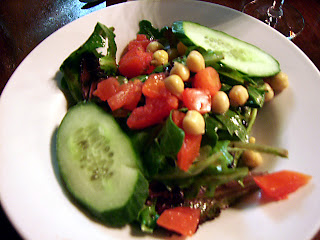 I had a house salad to start with balsamic dressing. It was full of baby greens & chickpeas. Mmm - quite delicious. 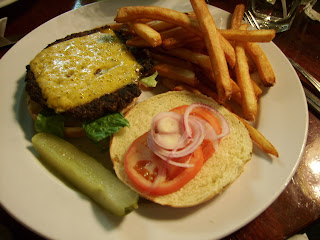 I was really hungry and we were out for a good time, so I opted for the veggie burger and a side of fries. I love fries. I know they are soooo bad for you, but they taste sooooo good! As far as veggie burgers go, this was pretty good.


We then headed back to the ACC to see if we would have any luck with tickets. The scalpers were gone, sold out! Ah well. We decided we might as well catch the rest of the game on TV, so we hiked down Front St. to a place we had passed earlier called The Bottom Line. It looked quite nice, so we hung out there, sat at the bar and watched the game. 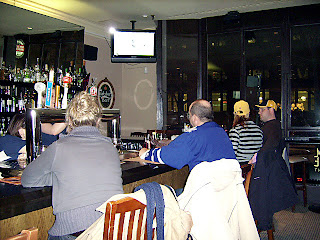 Allison & I were wanting some dessert, so we splurged. 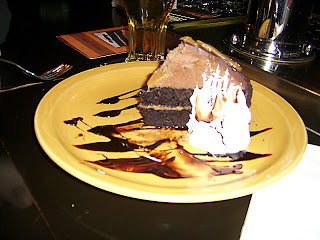 She got some chocolate, caramel cake mousse thing. It was a massive hunk of cake. 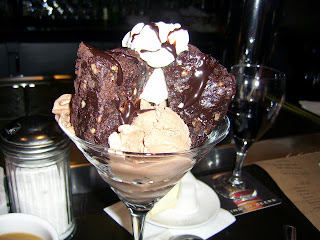 As expected, neither one of us could finish.

The game was almost done & who should walk in with some friends? Former Leafs captain, DOUG GILMOUR! We really wanted to meet him, but he was out for drinks with his wife & friends and we didn't think it would be appropriate to butt in and bother him. After much debating, Ali & Jim thought it best if we just leave and not interupt his evening. Jim said "I'll probably regret it." I was thinking I would too, so I decided to take my chances and go over. OMG! He was soooooo nice! I apologized and he was all "Oh no, don't be silly. It's quite all right." He signed autographs, chatted with me, chatted with Allison, chatted with Jim - turns out they have a mutual business acquaintance - and took his time and was very attentive & really focused on who was talking. What dreamy chocolately eyes. I've seen him play hockey a gazillion games. He's been on TV & in photos and the newspaper more times than I dared to count, but never realized that he looks REALLY good. Very healthy looking.*wink*
He was most agreeable in posing for a photo. (click pic for larger view) 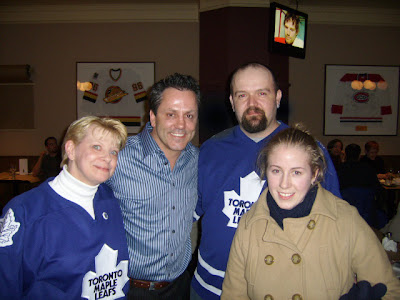 So our night for the hockey game that turned bust was, in the end, a very exciting evening indeed!

Jim & I have never really celebrated Valentine's Day. But as luck would have it, I ended up having a day off on Wednesday which was ideal, because we got our biggest snowstorm of the year, so far, on Tuesday night. No digging out for me. I stayed cozy inside. I decided that I would actually do a little something to celebrate the day. I had to work with what I had, and this is what we ended up with. 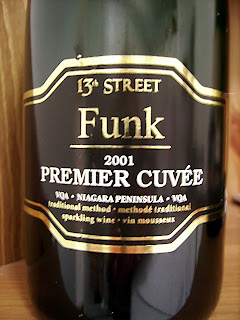 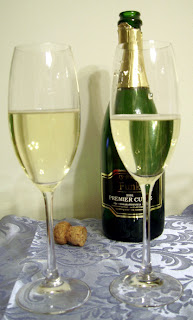 We started out with some bubbly! This sparkling wine is from a fantastic Ontario winery, 13th Street. This wine is made in the traditional method or Methode Champenoise, basically meaning they make it like they do in Champagne with the second fermentation happening in the bottle. Some sparkling wines are made in huge tanks with the second fermentation taking place in those tanks. Those wines would be called Charmat Method. At 13th Street they make all of their sparkling wines in the traditional method.
This particular one is a blend of Pinot Noir & Chardonnay and was aged in this bottle for 3 years. It had a wonderful toasty, nutty flavour with a hint of apple. Very delicious! 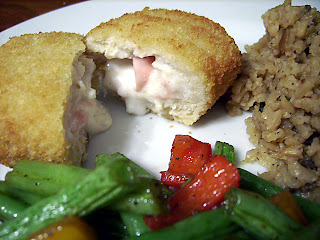 For dinner, we had Oh Naturel! Chick'n Cordon Melts which I had blogged about a few months ago. They seemed like a sort of romantic food - fitting for Valentine's Day. I served that with some garlicy brown rice and Quick Roast Green Beans and Peppers from The Everyday Vegan. 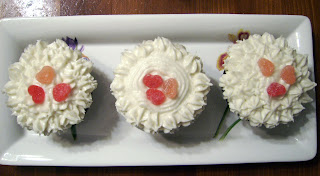 For dessert, I made chocolate cupcakes using a tried & true recipe from my Betty Crocker cookbook. 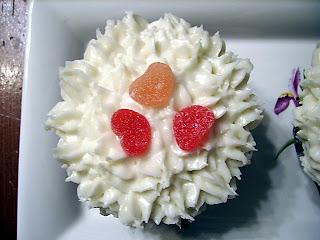 I iced them with buttercream frosting and decorated with little heart-shaped gumdrops. 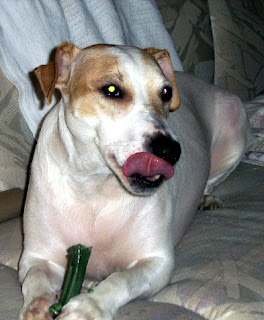 My other sweetheart also got a Valentine's treat. Here's Simon obviously enjoying a Greenie. At our house, everyday is Valentine's Day for Simon!

There seems to be a little confusion with the next post. It's a two-parter. Watch the video. Don't know who that is conducting the interview? Then scroll down to read the second half. YouTube will no longer let me put a long explanation on a video that I post. Or maybe it's the "New" Blogger that's acting up. Hopefully, this will help. The answer is there. Just keep scrolling.
Posted by Carrie™ at 12:33 AM 2 comments:

Blast From The Past

Recognize the person conducting this 1985 interview with Strange Advance? 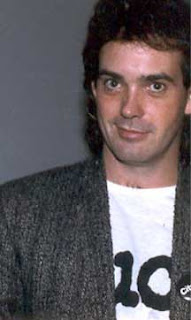 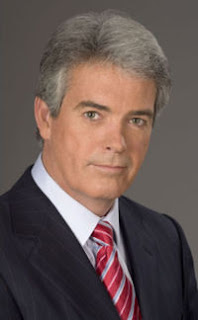 We "older" Canadians remember when we got our own music channel. It was/is called MuchMusic. Similar to MTV, MuchMusic hit the airwaves in 1984. We "older" Canadians will remember some of the original VJ's - Erica Ehm, Christopher Ward, Michael Williams, Terry David Mulligan, etc. Of course, the above, then known as JD Roberts, was a familiar fixture on Much. He has since gone on to bigger and better things - CBS News Anchor and now he can be seen on CNN, going by the name John Roberts. You've come a long way but you'll always be JD to us "older" Canadians. 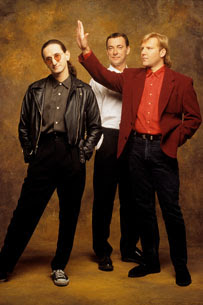 It was Rush and their song 'The Enemy Within'. Remember that for all of your trivia needs.
Posted by Carrie™ at 12:42 AM 1 comment:

I haven't had a whole lot of time home to cook lately, but did manage to whip together a tasty TV snack. I'm hooked on American Idol and am all geared up for the new season. I made Roasted Red Pepper Hummus from La Dolce Vegan & served it with pita triangles. This recipe makes 2 cups which I knew we'd never eat, so I easily halved it. 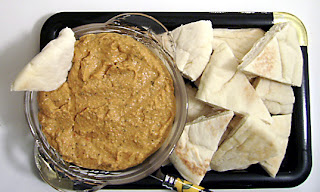 This was so easy to make & took virtually no time. We put a pretty big dent in it while watching some of the auditions. 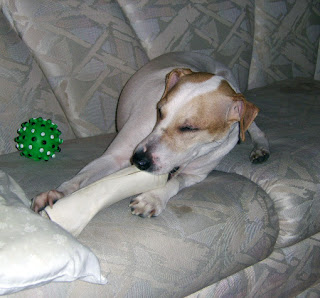 Simon couldn't have cared less & spent his evening chewing his bone. It was stuffed with cheese & Rollover. In Simon's opinion, it's a combination that can't be beat!

Earlier this week, I was trying to catch up on some of my blogging buddies and see what everyone has been up to. (More like, what everyone has been eating!) I'm so far behind on commenting, it's shameful. My apologies to everyone. I do pop in for quick reads, but don't always have time to write comments. What with training at my new bakery job, working some extra hours at the LCBO because everyone seems to be sick, and trying to get some decent sleep, I don't have much computer (or cooking) time. Anyway, on a stop over at Teddy's blog I saw she made this meal recently. I remembered that I still had some of those Morningstar Farms Buffalo Wings in the freezer from our cross-border shopping trip and I decided to have these for dinner the other night. 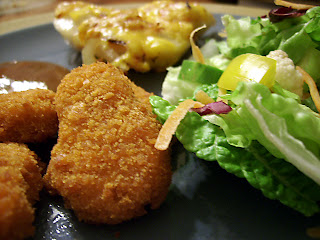 Yummy! Sometimes I find them a little to hot, sometimes not, so I dip them in some plum sauce. The sweet offsets the heat. 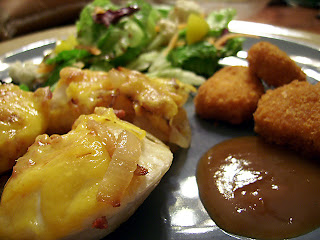 I also made some perogies. Now these are by no means authentic and I didn't make them from scratch. These are cheater frozen ones. They have a potato and cheese filling and I cooked them up pub-style with fried onions, bacon bits & cheddar. So fatty, so delicious! 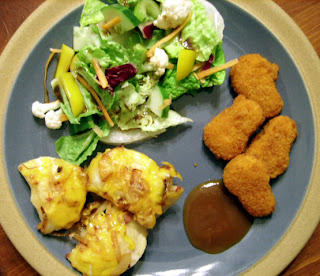 I also used up some veggies in the fridge and made a garden salad. For the dressing, I made Wolffie's Balsamic Vinegar Dressing also from La Dolce Vegan. This dressing is also a bit sweet (to combat the heat of the wings) with light maple flavour. Jim didn't much care for it, but it's one of my favorites. 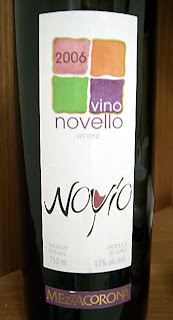 You know I like my wine! I pulled out one of the few bottles of Nouveau that I have left. It's a light, fun pop-like wine that went nicely with a fun, non-fussy meal. This is one of the Italian varieties that was available this year & it was quite nice.

The auditions were as nutty as ever and the contestants have been chosen. I'll be watching (or TiVo-ing) until a winner is chosen. Anyone else hooked on this show besides me?

Now for your listening pleasure - This is one of my top 10 favorite songs. Freddie Mercury & Queen are truly one of the best bands ever.