A Word From Simon 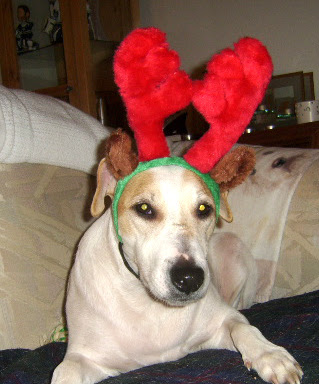 HA HA. It's Christmas time so let's dress up the pets and make them look ridiculous. See the stupid contraption Mommy put on my head? I was not impressed.

Mommy was busy with Christmas (like everyone) but she took some pictures to post here. She'll be tied up with work and stuff until after the New Year so she asked me to put up a little post so you don't think she forgot about you.

Sometimes, I wish she'd forget about these silly get-ups she has for me. 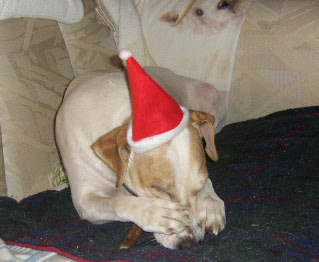 In this case, the 3 B's are in this soup. Beets, Beans & Barley. I got a wicked deal on a 10 pound bag of beets and decided to finally try this recipe that I've been eyeing for quite a while now. Here we have Beet, Barley and Black Soybean Soup with Pumpernickel Croutons from Vegan With a Vengeance. That is probably the longest soup name ever. 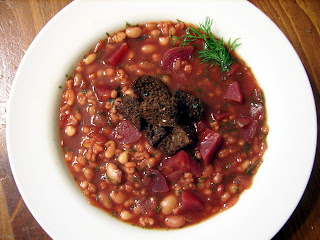 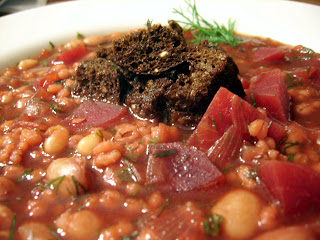 This soup turned out to be wicked delicious & such a pretty colour! I couldn't find black soybeans, so I opted for a mix of beans that I cooked up the night before. I think I threw in white kidney beans, romano beans, some chickpeas. The croutons for this are a must! Holy doodle were they good! 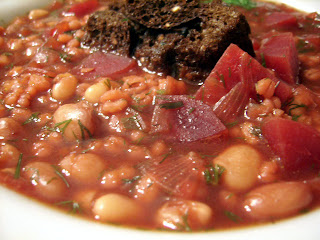 The dill flavour was especially nice. The addition of fresh dill gave a little lift to the colours in the bowl with nice bright flecks of green throughout. This took virtually no time to throw together and is definitely a keeper! 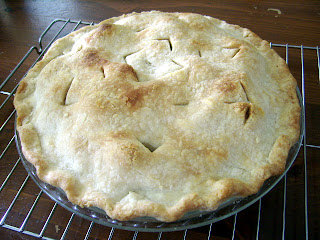 I always have apples in the house and I eat one almost every day. "An apple a day keeps the doctor away" must hold some truth. In the past year, I have not had one sick day. I am the only employee with perfect attendance. I'm surprised - aren't I supposed to be weak and sickly because by not eating meat I don't get enough protein. (I love to disappoint!)
Anyhow, when local apples were in season, I went a little crazy and bought a lot. Some of the few that were left were starting to get soft, so I dedided to make a pie for dessert. 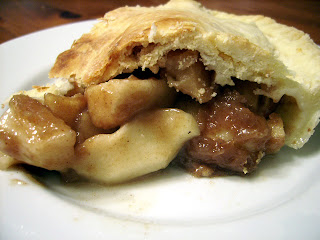 It turned out amazing! I like a bit of extra cinnamon and the crust was light and flaky. So delicious. Everything was so good in fact, we had the same meal the very next day.
Posted by Carrie™ at 10:36 PM 11 comments:

The Trouble With Bryan

Gaia left a comment on the previous post and said "By the way, you haven't mentioned Bryan A. in a while...is everything ok between you too? :D"
Well, not really. Actually, we're in a bit of a tiff. Since a girl feels the need to pour out her heart (and hurt) to friends, I know you'll all sympathize & understand. 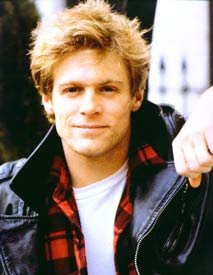 And I looked pretty much the same as I do now. Only much slimmer with Farrah Fawcett-like hair and blue eyeshadow. I was very cool in my North Stars & jean jacket. We've been together for over 25 years now and I still like listening to him sing those cheesey, sappy love songs.

But, I haven't seen him in a while because he seems to insist on touring all the time. Geez! Today he's in Latvia; then off to Estonia, Finland & Russia. Bryan, you gotta come home!

Recently, I heard some fantastic news. BA is coming to Toronto! He's doing a show at the ACC on Feb. 28. I found out the concert is a fundraising event for Sunnybrook Hospital with Josh Groban and fellow Canadian artists - Sarah McLachlan and Jann Arden. It's to raise money for a hospital facility to help sick newborns and mothers who have high-risk pregnancies. I think it's a great cause! Only problem is, the cheapest tickets are now at $300 a piece!! And the seats aren't that good even. I'm not paying $300, but has my VIP pass arrived yet? No - and I think I know why! THIS!! All the Jordache jeans and Gee Your Hair Smells Terrific in the world can't compete with Elle. 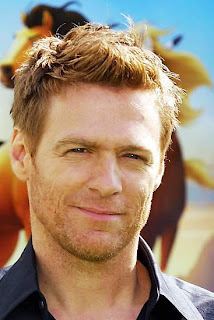 Give him time. He'll come around, because he knows what's good for him. Me! He'll show up at the store with my VIP pass, a load of flowers, pick up a case of wine; we'll make up and all will be good with the world.