News reports came out this week about the LCBO and plastic bags. You can read the Toronto Star article here or a provincal government press release here. Once the supply of bags at store level are depleted, we will no longer offer plastic bags as an option! Ideally, we encourage customers to BYOB (bring your own bag). Some people are already bitching about it. As suspected, some are saying "now you'll just kill a lot of trees." Rather than saying what I would like to say, which is - 'listen asshole, if that's a big concern to you, then why don't I see you with your own reusable bag' - I just say that a tree can grow full size in less time than it takes for a plastic bag to break down. I don't know if that's a really good response, but it's the best I can come up with (aside from the asshole comment). Any suggestions?


Quite a while back, I mentioned a couple of different products I'd tried from Gardein and thought, for the most part, they were just sort of OK for the price. I think they have redeemed themselves to me.
A couple of months ago, Jim & I stopped into a grocery store and they were having an in-store demo featuring Gardein. First off, let me say that I was happy to see vegetarian food being showcased (and I do believe all of the products in this line are vegan), secondly, it was obviously a hit because almost all of the packages were gone! Thankfully, I was still able to snag one. The flavour being offered was the Chick'n Breasts in a Herb Dijon Marinade. YUMMY! 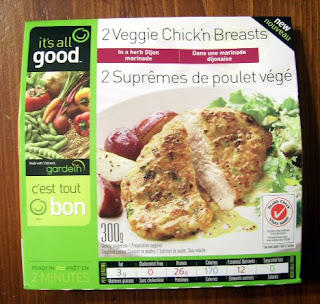 I made them for a quick, easy dinner a couple of nights later. It's one of those deals that comes in a plastic package - just poke and zap. 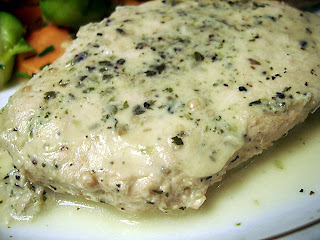 We had these with baked potatoes and brussels sprouts & carrots with almonds & chives. 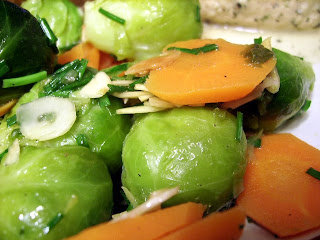 I found this recipe on the internet years ago. I don't remember where so I can't give credit, but I will post it below. These were fairly easy to make and were quite tasty. (and pretty).

The poor potato must feel left out. Wanna see that too? OK, here it is! 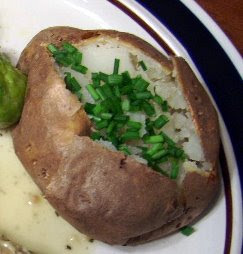 I lovelovelove potatoes! Especially baked with a nice crisp skin, lots of margarine salt & pepper and topped with chives.

Since the dijon chick'n was so delicious, I'll be more inclined to try some of the other flavours. I see Tuscan Tomato in my near future.

Another product tried last week was a new ice cream flavour from President's Choice. This is not a vegan product, but for readers who use dairy products and like maple, meet the best maple ice cream you will ever have. 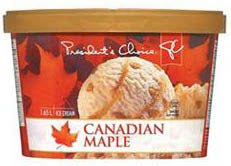 Canadian Maple ice cream! It's got maple ripple throughout and little chunks of maple sugar mixed in. Holy! Delicious! Jim wanted nothing to do with this because he doesn't like maple. Whatwhat?? He's nuts.

.
If you're in Canada, like maple & indulge in dairy, I highly recommend this new flavour. This would excellent in a waffle cone.
.

Bring a large pot of water to a boil. Cook sprouts in the boiling water for 10 minutes. Meanwhile, slice the carrots 1/8-inch thick. Add carrots to sprouts and cook for another 4 minutes. Drain.

In a large skillet, heat margarine with brown sugar and lemon juice. Add sprouts and carrots and cook, stirring, about 5 minutes or until vegetables are glazed. Taste for salt & pepper and toss with chives and almonds. 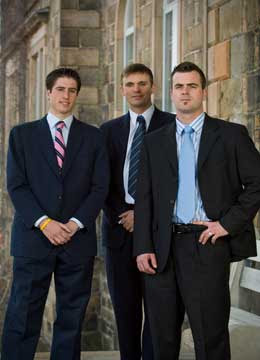 (My brother, Brian, is the handsome one in the middle)

UNB was the only Canadian team to make it to the competition. The students, who are all members of the university’s Student Investment Fund program, competed against teams from universities around the world.

They presented and defended their stock recommendations and were judged on their performance by industry experts. This gave them the opportunity to see how they stacked up against their peers.

Brian Bagnell, Dustin Besaw and Jason Misener, of Fredericton, and Guofeng (Jack) Ma, from China, are members of the team. Ian McAvity and Nathan Ough, both of Rothesay, were also in New York as observers. They are bringing back as much information as they can to help next year’s team prepare for the challenge.

During the competition, teams were given ten minutes to pitch their stock recommendation to panel members who were from companies such as UBS, Neuberger Berman, Strategas Research Partners and the Chartered Financial Analyst (CFA) Institute.

Then, during a 10-minute question and answer period, panelists judged the students on their chosen companies and on how effectively they supported their recommendation, the quality of slides used, the strength of their arguments, and their ability to respond to questions. The judges looked for all members of the team to participate equally.

The initial $1 million to implement the Fund was provided to the Faculty in 1998 by the New Brunswick Investment Management Corporation. By the end of 2007, the student fund had grown to approximately $2.2 million.

(This article was copied from the UNB website, news section)

They were also featured in the Fredericton newspaper - the story is here.

World Vegetarian Week runs from May 19-May 25, 2008. For those of us who abstain from eating our furred & feathered friends, we know we're doing a good thing. By eating a vegetarian diet, one has the potential to save upwards of 100 animals a year. Vegans, even more so. If you're a meat eater, why not make a pledge to give up meat for a week. It's not as hard as you think it is.

A lot of "normal" dishes are vegetarian already. For example, a personal favorite, tomato soup & grilled cheese. Chili is a popular one-pot, throw-together meal. Use lots of beans to make it extra hearty. Add crumbled tofu for an extra protein punch. If you really want the meatiness, use Yves Veggie Ground Round. Same with Shepard's pie...use faux hamburger. It's already cooked, so it's a wonderful time saver. Pizza is delicious with just veggies. Pastas galore - just don't add meat. Make chunky sauces with lots of veggies and you'll never miss the meat. I could go on & on. Below I've listed some sites that have excellent recipes.

The Vegetarian Society - not only has recipes, but contains loads of valuable information on all things veg*n.

MUTO a wall-painted animation by BLU

My blog pal, Shawn posted this on his site and it was just too cool for me not to share.
Gimme your thoughts people! And have a glorious weekend. Happy Victoria Day to my fellow Canadians.

OK. My computer seems to be up and running fine. Whew! Jim is fabulous and now I'm surfing faster than ever.
I have pictures and "stuff" saved, but I haven't gotten around to loading it back onto my computer, so I have no food photos yet. And....I still haven't found my camera. I guess that means I'll have to go out shopping for a new one. Crap.

I have been keeping up with American Idol though. Anyone else still tuning in? Oh, friends poo-poo it and say it's cheesy & whatever, but I like it. So what. My favorite, David Cook, is still in the running and (fingers crossed) has an excellent chance at winning. The final 3 performed tonight and during one round, the judges chose songs for the contestants to sing. Simon Cowell chose for David and the song he picked was "First Time Ever I Saw Your Face." Check it out below. I also added a couple of my other favorite performances.

The First Time Ever I Saw Your Face

You'll Always Be My Baby

Anyone who can make a Mariah Carey song listenable is tops in my book.

Music Of The Night

From Phantom of the Opera. Who in the free world hasn't seen this play or heard this song? He does an excellent job.

Is This Woman Crazy? 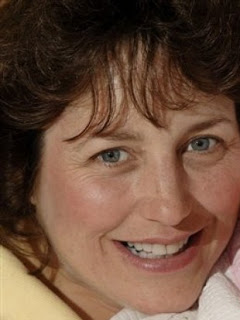 It's been all over the news that Fredericton is experiencing a major flood. This winter they had a particularly high snowfall and now it's melting along with all of the ice in the river. Add spring rain to that and the water in the Saint John River is rising fast. Here is a map of the area surrounding Fredericton.


The blue is, of course, the river. It flows from North to South. Near the town marked Keswick, there is a hydro-electric dam. It's holding back a lot of water. Every year, everyone says "I sure hope the dam holds."

OK, the river rises in the springtime. Places on the north side flood more so than the south side, which is the side I grew up on. But I lived on Waterloo Row which is right across the street from the river. We would quite often have the water crest the banks, and sometimes spill over, but it didn't very often make it to the road. Down the street from me was a bridge overpass and the dip underneath filled up with water every year. And every year, some numbskull would try to drive through it and have their car stall. I'm not kidding. Every year.

In 1973, Fredericton had one of the worst floods on record for the area. Water levels reached 8.63 metres. That translates to 28.3 feet! I remember my mom waking me up in the middle of the night and we had to flee our home and go stay with a gentleman my dad worked with who lived on higher ground. The only way people could get around was in boats. My father has some pretty neat pictures of the events. I was 9 at the time, but remember a lot of it. Scary yet exciting, happy there was no school, feeling odd at staying in someone else's house, missing my own home with my own things - all kinds of emotion. Of course, being that young, the thoughts of damage - millions of dollars worth, people losing their homes, possessions, livelihood, etc. never entered my mind.

This year, it's gearing up to be as bad as 1973. My parents have sinced moved from that house on Waterloo Row and are in no danger of flooding. My mom lives in Oromocto, and across the river is Burton which was featured on the TV news. So far, she's OK. My mom went downtown a couple of days ago and sent me some photos. ( Dreena might recognize some of it from her university days) Click the photos for a larger view. 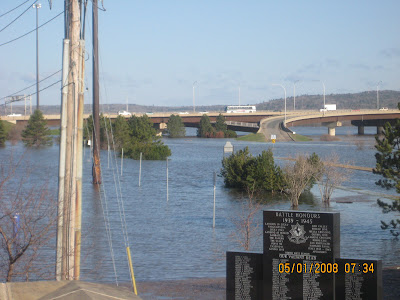 .
This is the Westmorland Street bridge that goes from the downtown core to the north side. 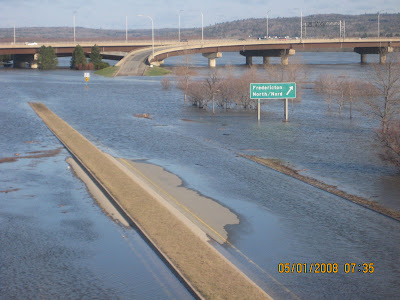 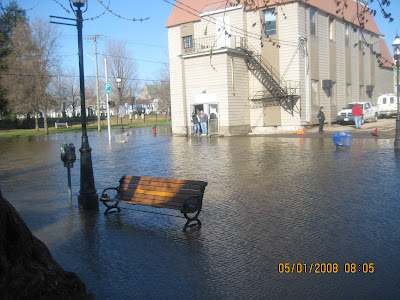 This is downtown. I used to go for tap-dancing lessons in that building. . 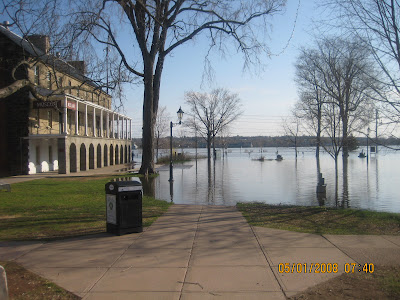 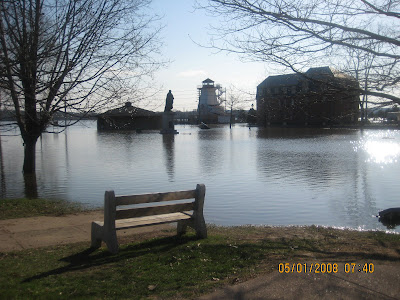 .
.
.
.
.
.
.
..
.
.
A different shot of Officer's Square. Just to the left of the lighthouse is a statue of Winston Churchill. He was a strong man, especially during WWII, but he's looking a little scared to me here. 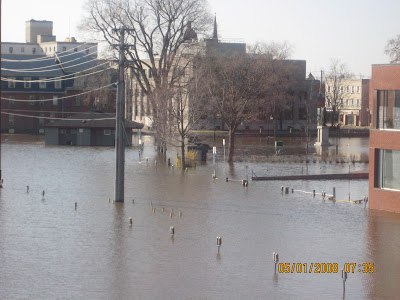 .
.
.
.
.
.
.
..
.
.
.
.
Look at the parking meters! I think that red brick building to the very left is the library. I'd like to know what brainiac decides that a great place to build a library is overlooking a river that floods every spring.

Please say prayers for all of these people and for my hometown. It's such a nice place.
Posted by Carrie™ at 8:40 PM 6 comments: