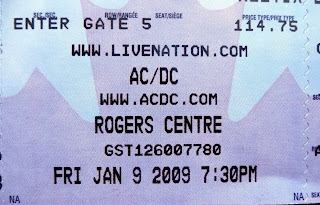 I've got 2 of these babies in my hot little hands. WOOT!! This will surely help us out of our post-Christmas blues.
Well, it finally happened. We got snow that stayed on the ground. Simon loves the snow so he was very excited for his first snow-walk of the season. 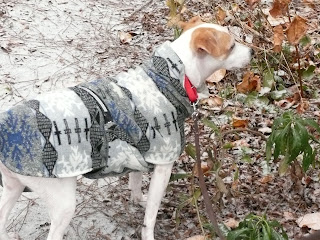 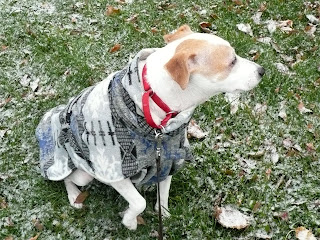 He still doesn't like his hoodie. When I put it on him, he just stands there. He isn't even lured to move by his doggie crack. He really likes his old coat, so he ventured out in classic style. Once the snow stopped, we had about an inch or so on the ground. Not a lot, but it's a start. I'm sure there is plenty more to come.

As much as I like winter and going for walks in the snow, I've been occupied in the kitchen. Dynise over at Urban Vegan has written a cookbook! It's called "The Urban Vegan: 250 Street-Smart, Animal-Free Recipes" and is slated for publication in the latter part of 2009, but the manuscript has to be submitted in the very early spring, so she put out a call for recipe testers. I had a great time testing for Dreena a couple of years ago, so I volunteered. Holy! Am I ever glad I did. I've been making some great stuff in the kitchen. I can't give you any details of course, but I can show you pictures of the finished products. 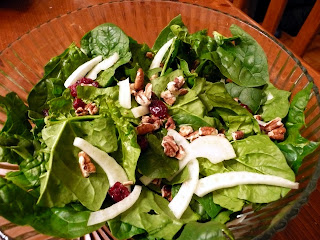 Up first a Spinach-Fennel Salad. This was so delicious. It's like something you'd find on the menu in an upscale restaurant. It got dressed with Creamy Avocado Dressing. 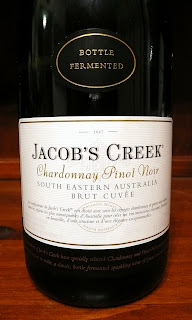 We jumped the gun and popped the cork on some bubbly to toast Dynise's success. Jumped the gun because the book's not even done yet. As far as it being a success...that's a given.
This is a sparkling wine from Jacob's Creek out of Austrailia. It's one of the better "affordable" sparkling wines that I've found. Made with the classic Champagne grapes, Chardonnay & Pinot Noir, it is also bottle-fermented following the Champagne method. Something to keep in mind if you're looking for a nice bubbly for New Year's Eve. 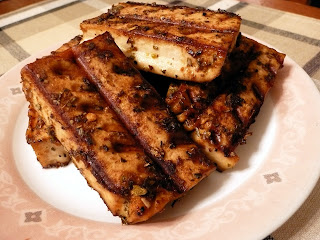 Another recipe I tried was the marinade for tofu. This is the best marinade I've made so far. The tofu was then grilled to perfection on my George Foreman.
Jim loves pasta and could probably eat it in some for or another every day of the week. When I reviewed the recipe for Spaghetti Con Salsa Fresca, I knew it would be a hit. 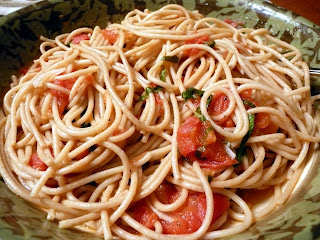 Simple, fresh, with vibrant colours & flavours -this was very good. I served it with another Urban Vegan delight - 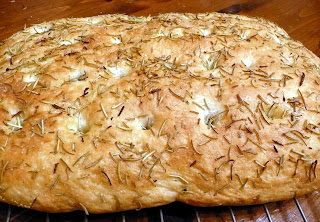 Focaccia! I sprinkled a lot of rosemary on the top because most of it ends up falling off when I slice these breads, so I wanted to make sure I would have enough still stuck on. 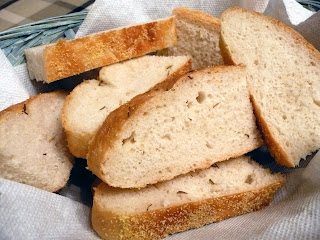 I had a bit of trouble with my food processor in making this and ended up kneading some by hand. I'm not sure I kneaded it enough, but it was still super delicious! 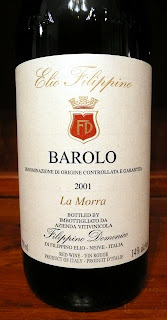 Something else I dug out for this special occasion was this Barolo. What special occasion you ask? It was Wednesday!
It's great to buy wines to cellar and then enjoy years later when they have mellowed, evolved and reached their flavour peak. It doesn't have to be a special day when you open a bottle. Make a terrible work day end on a high note by uncorking a little gem that you've had stashed away for a while. Not that we either had a terrible day, I just felt in the mood to have a great glass of wine. Did you know that 9 out of 10 bottles of wine purchased in Ontario are taken home and consumed the same day? This one was purchased some time ago, but it's time to be consumed had come. Yum! We had it with the pasta & the foccacia.

Of course, every cookbook has to have a dessert chapter. Isn't that the finish to an outstanding meal? Here we have Double Apple Cake. 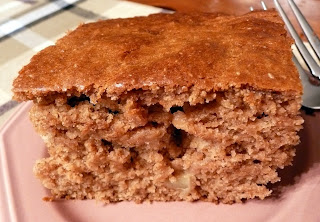 I can't tell you what's in it, aside from apples of course, but I can tell you that it is soft, moist & really, really tasty. Got you curious for the cookbook yet?
Posted by Carrie™ at 11:35 PM 7 comments:

For Those About To Rock....

We had a nice week of Indian summer, then the cold started creeping in. Out came the coats, and some days scarves & gloves. 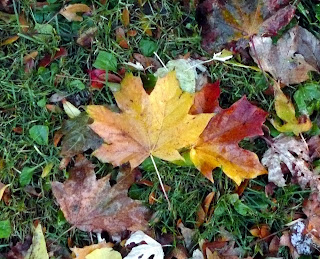 Leaves are changing colours and falling off the trees. Pretty, but sad. 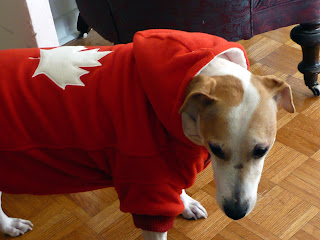 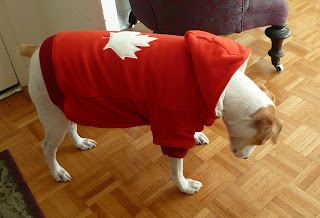 Simon got a new hoodie to keep him warm, but he seems to not like it very much. 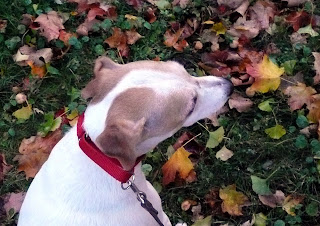 So we went out without it. He loves sniffing around in the leaves. I must say, I like that smell of fall too. The rotting leaves, cool air...takes me right back to childhood and memories of Hallowe'en - always.
The cooler weather brings all kinds of comfort foods back to the kitchen. First up, potatoes! 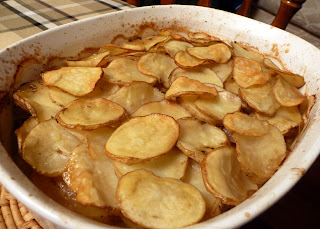 What's more comforting than spuds? This dish is similar to scalloped potatoes, but with vegetable broth instead of milk. The broth was infused with rosemary & thyme and the potatoes were layered with lightly sauteed onions & garlic. Holy! Were these delicious. Thank you Gordon Ramsay for the recipe. 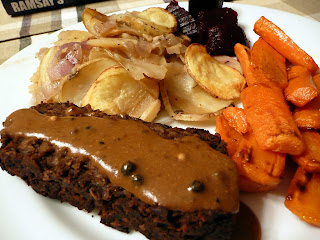 I made a "meat" loaf using Robin Robertson's recipe from The Vegetarian Meat & Potatoes Cookbook. This is the best "meat"loaf recipe I have found. It's so delicious. Instead of gravy, I made a peppercorn sauce. It suited this meal perfectly. While the potatoes were in the oven, I also roasted some carrots. Talk about comfort!
Of course we have wine with meatloaf. Who doesn't? ;o) 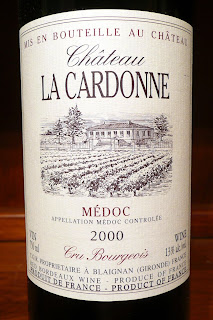 This was given to Jim by a customer. I looked it up on line and some sites didn't give it a very good review. I don't know what they were drinking, but we thought it was delightful. It was so smooth, like velvet in my mouth. The flavour complemented the loaf & sauce wonderfully. In the world of wine, there are a lot of snobs. I try not to be snobby, but informed. Really - at the end of the day, it basically comes down to drink what you like. And no matter what others say, I liked this. I thought it was flavourful, with a good structure and balance.

Cold weather always brings soup! There's a lentil soup that I started making years ago complements of Linda McCartney. This was one of the first vegetarian cookbooks that I bought - Linda McCartney On Tour. 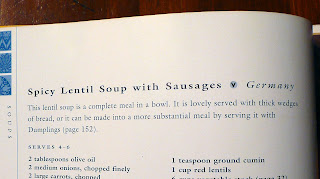 I liked the sound of it just by the title. It turned out to be a big favorite around here. 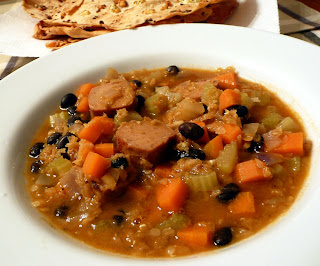 The recipe doesn't call for black beans, but I had half a can left over from making nachos, so I threw those in too. Served with some oregano garlic flatbread it sure warmed our tummies.
Food is good for the soul and so is Rock n' Roll! What better way to feed a rocker's ears than AC/DC!! 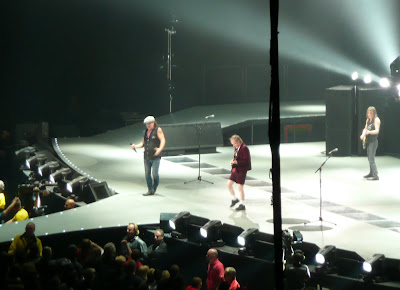 As part of Jim's birthday, I got tickets for the sold out Toronto show. The opening was utterly spectacular and it just kept right on going from there. We were on the Rock N' Roll Train for sure. 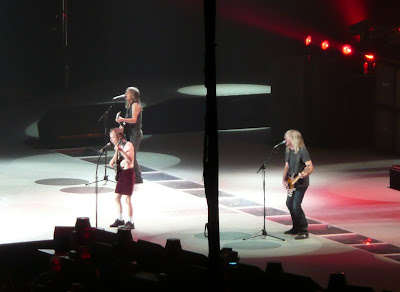 Those guys blew the roof off the Skydome (Rogers Centre, whatever...to many it will always be Skydome). This was the best effing concert I have ever been to. Two hours passed like that! They were finished and I just wanted more. 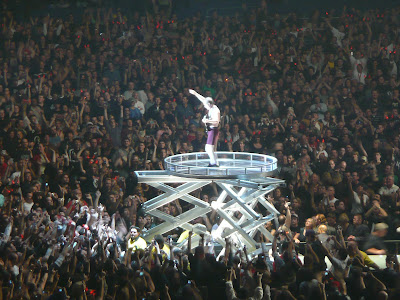 I loves me some Angus and he definitely delivered! Old favorites like Highway To Hell, Dirty Deeds Done Dirt Cheap, Hell's Bells, and a sprinkling of songs off their new album - which is totally kick ass by the way. It went #1 in Canada the week it was released and had the largest first week sales in this country in 5 years. 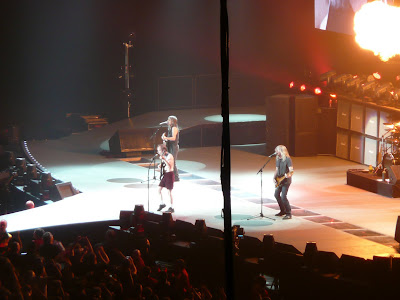 The show was pure R&R. A few cool things thrown in - an inflatable, cannons, strip-tease - but for the most part, just a stripped down stage and LOUD music. Look at the stacks of Marshalls. That was on either side of the stage. We had such an amazing time, I'm trying to get tickets for their second sold-out Toronto show in January. It was that good. AC/DC - we salute you!
Posted by Carrie™ at 7:12 AM 7 comments: