I freakin' love this show. My favorite contestant this year is David Cook. Check out this performance from Tuesday's show. They had to pick a song from the year they were born. This blew me away.
Anyone else watching?

So, my work schedule has been a mess. No consistency whatsoever. For a couple of weeks, I kept getting these last minute call-ins. I was buying food, then having to go to work and not being able to use everything up. Stuff would go bad and I'd have to throw it away. Grrr! The call-ins still go on throughout the year, but more so than usual this past month. I've been trying to plan meals based on staples I have in the house.

St. Patrick's Day came and I wanted to make stew. I found this recipe in Robin Robertson's Fresh From The Vegetarian Slow Cooker and had almost all of the ingredients. It's called Almost Irish Stew and the only thing I had to buy a green leafy veg.

Again, trying to get some greens into Jim. 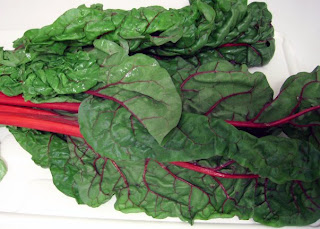 I had just picked this up the day before, so it was nice and fresh and green. The regular Swiss Chard looked like it had seen better days, but the red was really vibrant.

The recipe also called for white wine. I was in the mood for red wine with dinner and didn't want to open a big bottle of white just to use half a cup. OK, the recipe called for 1/4 cup, but who's measuring? I have a few small bottles of wine in the house, just for occasions like this. Don't buy cooking wine!! It's horrible stuff. Use a wine that you would drink. 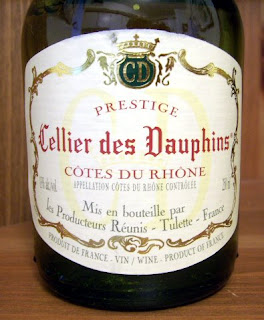 I used this one for the stew. It's decent enough and it won't break the bank. It comes in little bottles (250 ml) that are under $4.

The stew slow cooked all day in the crock pot. The greens were cooked seperately and then added in about 10 minutes before serving. 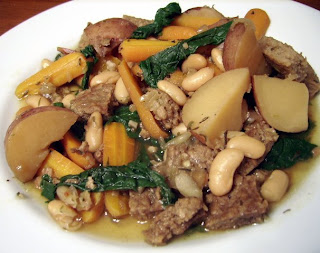 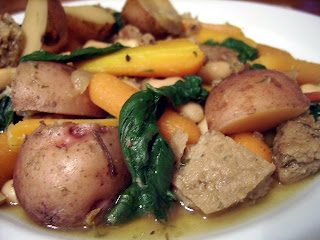 The original recipe didn't call for any kind of meat alternative, but did say that chunks of seitan could be substituted for the beans. I didn't have any seitan on hand and frankly, was feeling just too lazy to make any, so I fried up some veggie burgers, cubed them and added them in about half an hour before the stew was done. I used the beans too for an extra protein punch. 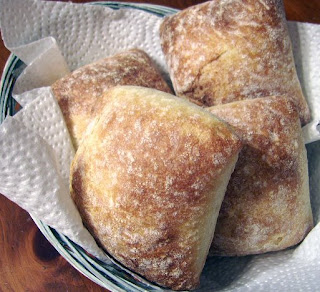 I didn't even make any soda bread (feeling lazy, remember?) so I opted for these delicious ciabata buns that we make at the bakery. They are crisp on the outside and dense and chewy on the inside. Perfect for stew. 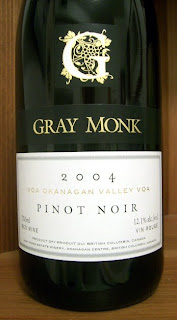 Since the stew had a "light" broth, I went with a light red wine. I really enjoy Pinot Noir. In Ontario, we don't see a whole lot of wines available from BC for some reason. They have a thriving wine industry, but I don't know where all of those bottles go. Certainly not east. This one, from Gray Monk, comes in through Vintages and I usually try to grab a couple. I've had this bottle for over a year and decided to give it a go. It was delicious! The 2006 offering was recently for sale and again, I bought 2 bottles. Wino Will didn't give it a great review, but I'll let it sit for another year and then try it, which I've always done with these wines anyway.
.
Oh, did Jim like the Swiss chard? Better than the kale, but still not a fan. He ended up leaving most of it on his plate, then when he thought I wasn't looking, gave some of it to Simon. Did Simon like the greens? He LOVED them!
Posted by Carrie™ at 12:20 PM 4 comments:

Long time no see. To quote Fiona Apple - I've been a bad, bad girl. I haven't put up a post in over 3 weeks! It's not like I've been loafing around, doing nothing. I've been clocking quite a few hours in at the bakery. I was also busy studying and I wrote the test for LCBO's Product Knowledge Level 2 and am waiting for my results. Right after that, my back had a minor flare-up. I'm doing a lot better now, so I have some food photos to show you.

Before I get to that, I was going through some pictures in my camera and found these that I had completely forgotten about. Since it seems to have ceased snowing, (for now anyway) these show us what we can look forward to very, very soon.
I've mentioned before that I live across the street from Lake Ontario and quite often I will take Simon for a walk along the waterfront. We like to watch the geese. 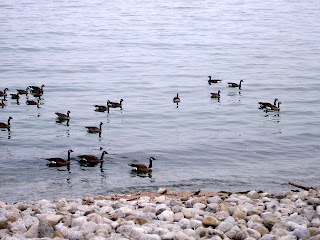 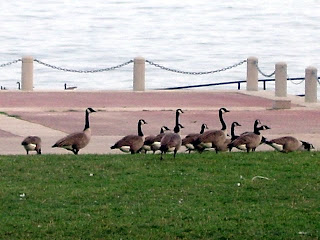 Simon sometimes barks at them, but most of the time he's not too sure of them, so we watch from a distance. They are beautiful (and protected), but they can be Nasty - with the capital n. I wish I'd had my camera when I came home from work the other day. There was a whole gaggle of them on my front lawn, squawking & pooping everywhere. I guess they decided the neighbour's lawn was better because they sauntered over there. They don't care about traffic either. If they decide they want to cross the street, they just go. They're total jay walkers. 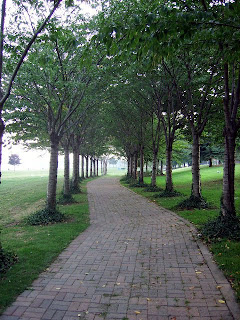 Simon loves to walk this pathway at the park. The trees were given as a gift from our twin city Itabashi, Japan. Right now they're leaf-less and everything is still covered in snow. 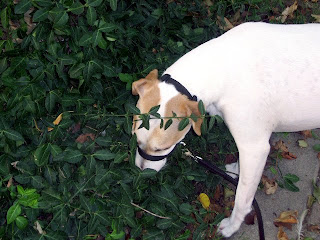 He stops to sniff a lot along the way. I figure, it's his walk, let him sniff.

Futher down the walkway, just for our convenience.... 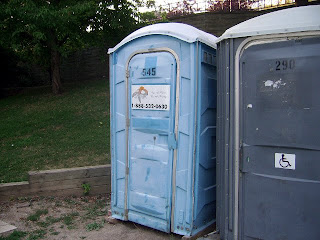 These, like the leaves, disappear in the wintertime. I took a picture because the sign on the door just cracked me up. 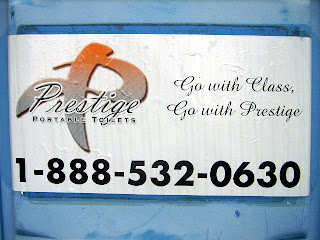 Go with class? Do they mean 'choose us' or go as in "go"? Either way, I thought this was funny on the door of a plastic port-a-potty. Stinky, port-a-potty. Go....and hold your breath. Peewu! When I think outdoor toilet, I don't think class.

That's not a very good segue to food, so before I move on, I'll fill your thoughts with nice things like puppies. 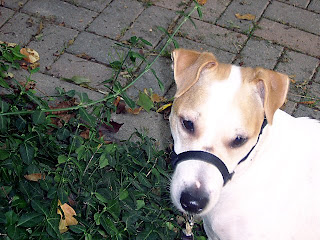 I still do occasionally eat free-range eggs and made something I haven't made in years - quiche! This is my take on Quiche Lorraine. I call it Quiche Carrie. 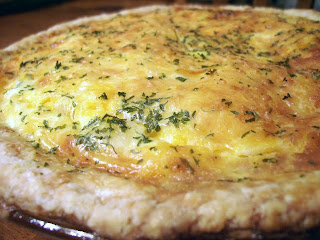 Some Lorraine recipes call for onions, some don't, some call for cheese, some don't, so I'm not quite sure which is authentic, but I like onions & cheese, so I include them. I used veggie bacon of course and since neither Jim or I like Swiss cheese, I used cheddar and a bit of mozzarella that I had in the fridge. 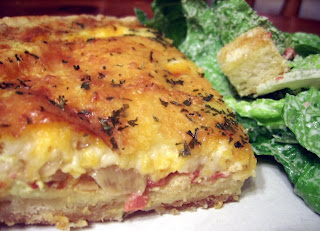 This turned out so well, even I was impressed. We had a salad on the side. I picked this wine: 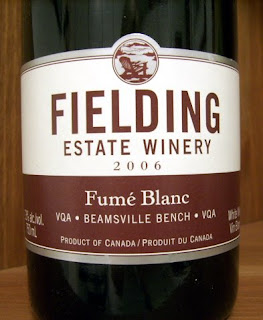 From Fielding, this is a favorite of ours. It's a Sauvignon Blanc that gets a bit of oak aging & it's very delicious. Alas, this was our last bottle of this vintage. The members club Sample & Shop Weekend is coming up & I'm hoping to see the 2007 offered. 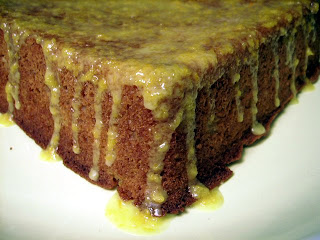 I cannot rave enough about this cake. It is out of this world! Jim really, really liked this and told me so after one bite. He usually doesn't comment too much unless I ask for his opinion, so for him to volunteer his thoughts after the first taste speaks volumes. 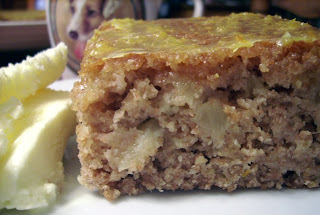 It's so moist and delicious. It stayed moist for days afterwards which scores big points for this 2 person household. I served vanilla ice cream on the side, along with steamy mugs of hot chocolate. 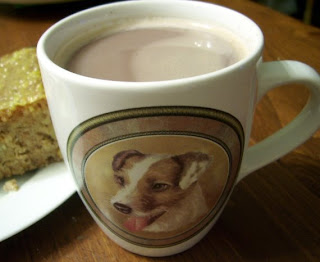 I wanted to show you my mug. I got a pair of these as a Christmas gift a few years ago. The picture on them is a Jack Russell! It looks almost as cheeky as Simon does.
I trust you all had a Happy St. Patrick's Day. I made an Irish stew of sorts that I will post about it a couple of days. Until then, Happy Easter to all who celebrate. I'm looking forward to the little mini vacation we get this weekend. Too bad Saturday isn't considered a holiday as well. It would make for a super 4-day long weekend. I also see a chocolate & sugar overload in my very near future. Check out this article for all that is bad in the way of Easter candy. Bring on the Easter Creme Eggs! I would say they are my favorites. I ate one while reading the article about how bad they were for me. (I'm not kidding!)
Posted by Carrie™ at 12:03 AM 6 comments: