Jim had a job about 2 hours north of Toronto and on his way home, he saw a roadside stand selling wild blueberries. He knows how much I love wild blueberries, so he paid an exorbitant amount of money and brought me home a pint. 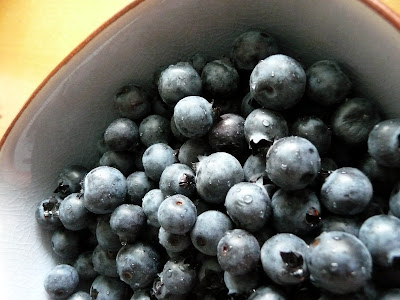 It's random things like this that make a day like Valentine's Day seem ridiculous to me. This is more meaningful than roses on Feb. 14. I know he got me these blueberries because he was thinking of me. He knew it was something I would like and that would make me happy. No special occasion, no pressure - just because. Gifts on Valentine's Day would make me wonder if the giver wanted to or felt they had to. So when I say "everyday is Valentine's Day at our house" and people roll their eyes....I bet they're not getting wild blueberries on a Thursday in July. So there!

Earlier this month, Jim got himself something that made hime very happy. A new barbeque. 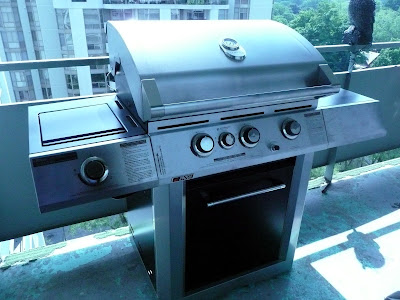 He got a ridiculously good deal on this at Canadian Tire. 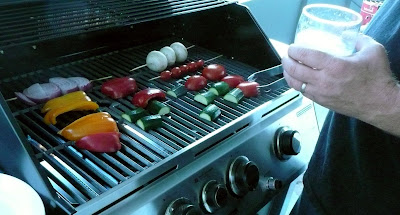 The first thing he did on it was grill some vegetables. They were then transformed into this - 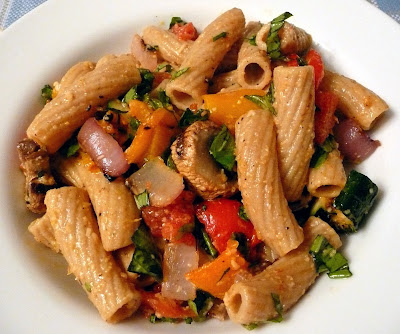 I used this recipe as a guideline, leaving out the eggplant and substituting red onions for the green onions. I probably could have used a bit more oil and a little less lemon rind & now know for next time. It was pretty good and super easy to make.

Of course, a big boy with a new toy equals lots of BBQ-ing. 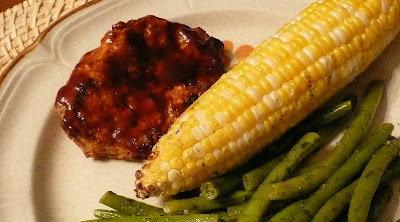 Here we have Presdent's Choice Meatless Chicken Breast, corn-on-the-cob, both done on the 'cue. Jim cooks the chik to perfection! Corn on the BBQ is the best! It turns out so sweet and delicious. If you've never had it, try it. You'll never have boiled again. I also had some green beans on the plate and I did something new with them.

Way back in March, we went to the Food and Drink Fest in Hamilton. That was a blast in itself, but one of the exhibitors that I stopped at and actually bought some things from was Victorian Epicure. I first heard of this company a few years ago via Sarah Kramer who had a give away on her blog and I was lucky enough to win it! Anyway, Victorian Epicure is a Canadian company that sells gourmet food products, spice blends, vinegars, rubs, etc. You can buy on-line here, but I think it's mostly sold through in-home parties much like Pampered Chef or Tupperware. There were some ladies at the booth who had made up veggie dips and fruit dips to try. They were very tasty. I bought a special 3 pack of "popular" spice blends and used one of the recipes that came in the package for the beans. 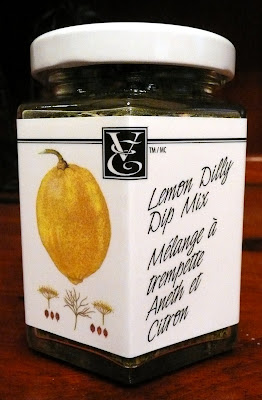 Basically, I steamed the beans until they were tender-crisp, then tossed them with some olive oil, lemon juice and Lemon Dilly Dip Mix. 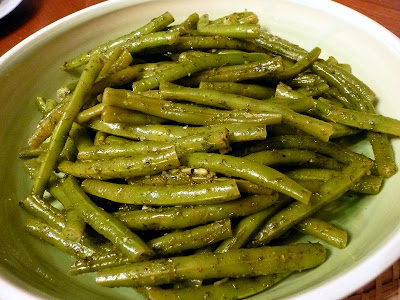 These turned out really yum. The lemon & dill are balanced nicely. Not one flavour was too overpowering.
I pulled out one of the bottles of wine we brought back from our most recent trip to the States. 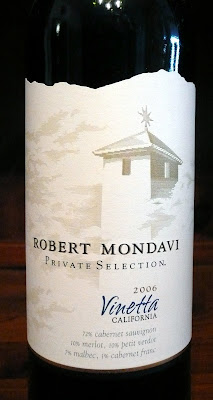 I've never seen this bottle available at the LCBO which is why I picked it up. That and the fact that it was only $7.99. I have found from my cross border alcohol buying experiences that the prices on California wine in New York are about half of what it costs in Ontario. Using that as a guideline I figure this would be a $15 bottle if sold here. 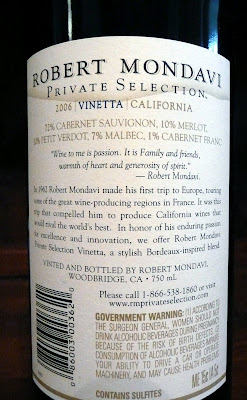 
This was a nice Bordeaux-type blend. Jim & I both quite liked it. Worth picking up for a weeknight meal. 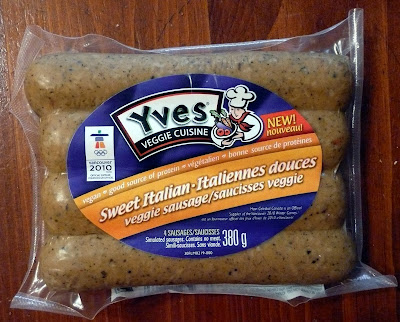 New Product Alert! I was looking at Yves spicy italian sausages and noticed this package that said 'sweet'. I thought "Sweeeet!" and bought one. Barbeque Man said he'd cook them on his new grill. As we browsed around the store I noticed couscous on sale. 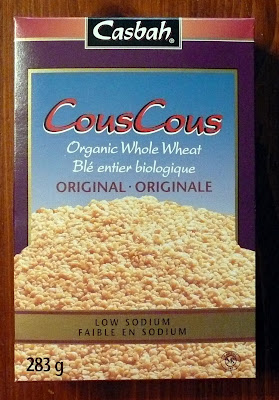 This would be great on the side with the sausages. I pulled out a cookbook I was given years ago by my friend, Michelle. It's by Jeanne Lemlin and it's a collection of 3 of her cookbooks in one. There is a tasty couscous recipe in the Quick Vegetarian Pleasures section of the book that is a snap to make.
So here we have sausage on a bun - with fried onions of course. 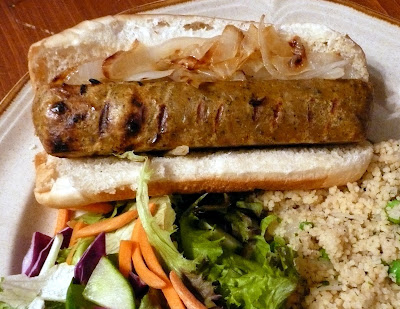 That's all I ever put on veggie dogs or sausages. Maybe sauerkraut if it's available, but usually, just onions - plain & simple. 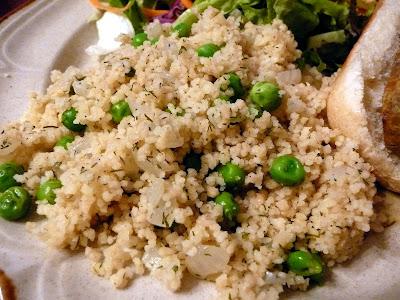 Here's the couscous. This was delicately delicious! The recipe called for dill, but I used the Lemon Dilly Mix. It worked very well. If you're interested in this couscous recipe, here it is: -
COUSCOUS PILAF WITH PEAS
(From Quick Vegetarian Pleasures by Jeanne Lemlin)
1 tbsp. olive oil
1 medium onion, finely diced
1 garlic clove, minced
1 cup couscous (I used whole wheat)
1 cup frozen peas, thawed
1 tbsp. minced fresh dill or 1 tsp. dried
1/4 tsp. salt
Freshly ground black pepper to taste
1½ cups vegetable stock
1 tbsp. cold unsalted butter, cut into bits (I didn't use this at all)
Heath the oil in a medium saucepan over medium heat. Sauté the onion and garlic, stirring often, until very tender, about 10 minutes.
Stir in the coucous, peas, dill, salt pepper and vegetable stock. Cover, bring to a boil and remove from the heat. Let sit until all of the broth is absorbed, about 5 minutes.
Fluff with a fork, then stir in the butter bits. Serve immediately.
Serves 4
Posted by Carrie™ at 3:00 PM 7 comments:

I was at Whole Foods the other day just browsing around and when I passed the salad bar, it called out to me. I had to answer. I scooped out a little bit of a few different kinds of ready-made salads and figured I could have those with dinner. 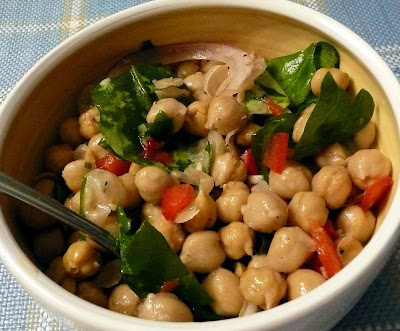 We both love chickpeas, so this was a no-brainer. Mixed in were peppers, onions, spinach -yum! 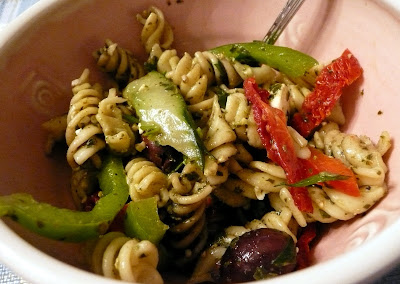 This one had no label, but it looked like some kind of Greek pasta salad. Crunchy peppers, cucumbers, olives and little cubes of feta cheese. 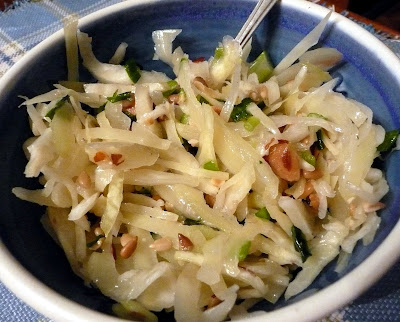 I loves me some coleslaw! This looked similar to Asian-type one I make, so I got some of this too.

I got home and didn't know what to have for dinner to go with the salads. Then I remembered someone at work talking about clubhouse sandwiches. I haven't had one of those in YEARS and had a massive craving. I set out to make a veggie version, which was really very simple. 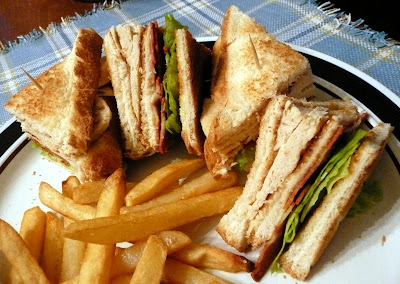 I grilled up some Naked Quorn Cutlets just plain on my George Foreman Grill. While those were cooking, I fried some Morning Star Farms Bacon Strips until just a little crisp. Assembly was easy with some mayo & lettuce. I don't like raw tomatoes, so I skipped those. I used white bread just to make it more diner-like. Some fries on the side and I was saying "Mel, kiss my grits!" 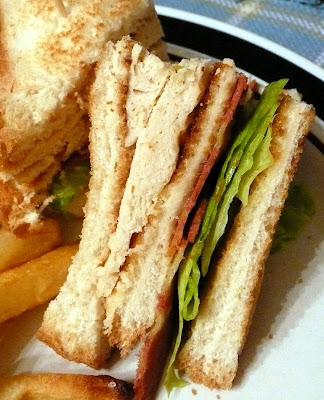 I was very pleased with the taste too. Very authentic I thought. Jim agreed and ate his whole plate and said he'd have clubhouse sandwiches anytime. As for the salads, they were very tasty although the coleslaw one was a little flat. It needed more dressing. 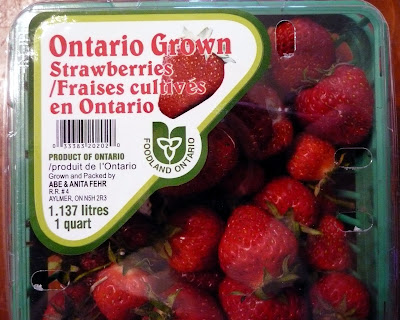 Strawberries are here! You know what that means..... 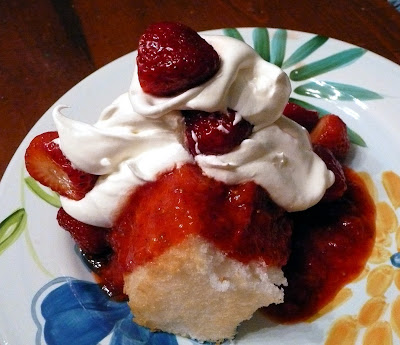 Strawberry Shortcake! I made a sauce by just pureeing some berries with my hand blender. I then poured that on cake along with some whole berries and Cool Whip. 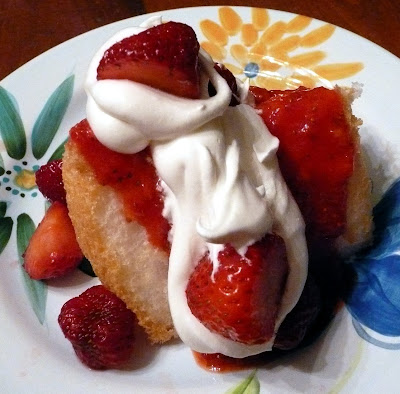 These strawberries are so sweet, no sugar needed. Delicious!