I'm bored with my look, so I'm going to try and change my template. Things might seem a bit rough and scattered for a couple of days while I work on this. It's also going to take me a while to get my links put back up. Please don't be offended if you don't see yours there. I'm slow. If you'd like to make sure you don't get overlooked, let me know to add you. In the meantime, enjoy this - 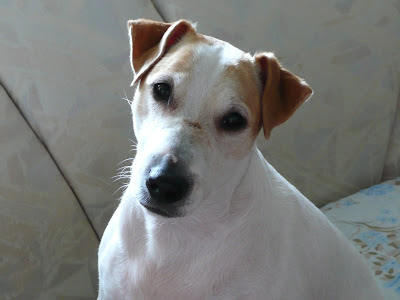 A few bloggers have been asking me what kind of camera I bought. When I first went looking, I had in my head that I wanted a camera made by a company that is known for cameras - Minolta, Olympus, Kodak, etc. Whe

n we arrived at the store and started looking there were a few models that I liked the look of, but once we started investigating them a bit more and talking to the guy behind the counter, I found this one most appealing. It seemed to suit all of my needs and for all the added extras, it was the best deal. It's made by Panasonic, which I don't associate with cameras, but I'm loving this one. It's a Lumix TZ3. I found quite a few reviews on-line, and if you're in the market for a compact camera, you might want to check this one out. It comes in a couple of different colours, but I chose black. 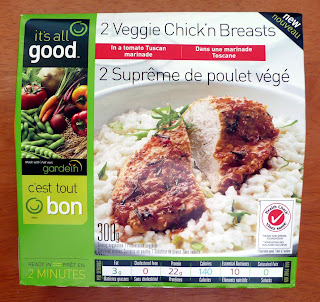 Remember how I like the dijon chick'n and wanted to give the Tuscan Tomato a whirl? 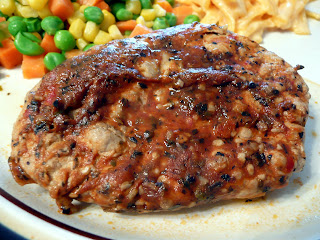 I did and wasn't overly impressed. It was just OK. There wasn't a whole lot of flavour to it and the chick'n seemed to be really pressed, dense and difficult to chew. I didn't overcook it. I microwaved for the minimum amount of time given. So...I'm sticking with the dijon.
This next product I just happened to see in the frozen section one day while wasting time before work browsing around Ultra Mart. 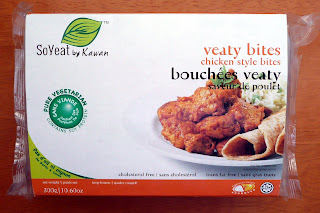 I'd never seen or heard of these veaty bites. There were these ones, an Indian flavoured one, a Thai and a BBQ. I looked in the package and they looked like bite-sized nuggets. What the hey, I decided to get them. I wasn't sure what to expect, so I used them in a stir-fry. 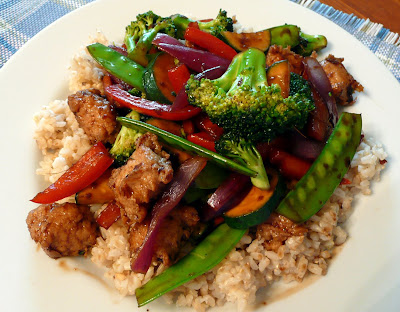 Holy crap were they delicious! I fried them up a bit first, then proceeded with the vegetables; added the bites back to the pan along with a sauce I made from tamari, garlic, ginger, maple syrup a big squeeze of lime juice, a dash of sesame oil, some cornstarch to thicken a bit and served the whole thing over brown rice. I was so impressed with these veaty bites that I promptly bought more including the Thai flavour. These are a vegan product to boot! There's a website, and you can download a brochure here using Adobe and that gives more info. If you look at the site you'll see that you can also download information on their flatbreads. I saw those at the store too, so I want to try them as well. I love finding new vegetarian

products. Canada is so lacking in that department. I guess we just don't have the population like USA to make it worthwhile for companies to sell here. WAAAAA!!! So not fair!! I hope these stick around. Boca Burgers came with 2 available flavours but after a year, they were gone. Muir Glen has also left.
My favorite part of the beginning of summer - 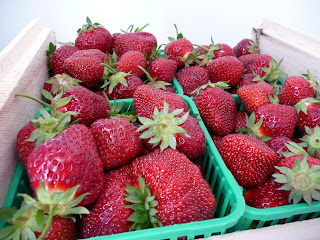 STRAWBERRIES! I think I must have bought 12-15 quarts of strawberries. A lot got eaten and a lot got frozen for winter time when the fruit options are dismal. Jim bought these for me one day on his way home. He said he drove by this strawberry farm for days and the smell wafting out of the place was like a giant strawberry. This picture are of berries that had been picked only hours before. OMG! They were soooooo good. And what is strawberry season without shortcakes. 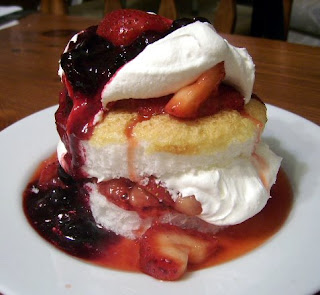 I used small angel food cakes, lots of strawberries and some blueberries that I simmered with a bit of lemon juice and sugar to make a blueberry sauce. It was all held together with Cool Whip of course.
On the pigeon front - the eggs have hatched!! I'll post some pictures soon.
Posted by Carrie™ at 3:44 PM 8 comments:

I guess I'm a little late. Ooops! Let's try over a week late - but better late than never I suppose. While I'm at it, Happy 4th of July to my American friends. I trust we all had nice holidays. Luckily for those of you south of the border, you had your day on a Friday. Ours was on Tuesday. Pffft. Some people swapped and took the holiday on the Monday to make a long weekend, but Jim & I both worked the Monday so we were able to enjoy the same day off. We didn't do a whole lot. Mostly just relaxed and spent some quality time together. But, cooking did take place and I had to break in my new camera properly so I have a lot of pictures to share.

What says summer better than mojitos! 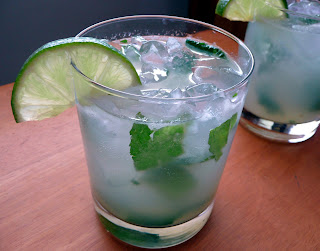 These are such refreshing cocktails. I prefer mine with a bit more lime than is traditionally used and since I was the bartender, I made them to my taste. 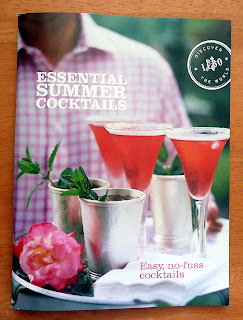 Occasionally, the LCBO will have little booklets full of cocktail recipes. This one came out to correspond with our spirits promotion and while I was browsing through it, I happened upon a drink that really struck my fancy and fit right in with Canada Day. 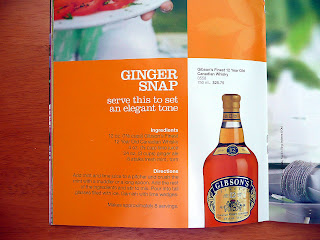 You can click to enlarge it if you like. It gives measurements to serve 8, but I just scaled it down to serve 2. Similar idea as a mojito, but using rye (also known as Canadian whisky) and ginger ale, along with lime and mint. 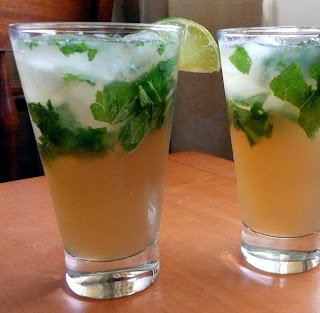 I liked this even better than a mojito. I always have been partial to whisky over rum, so that was probably the reason. 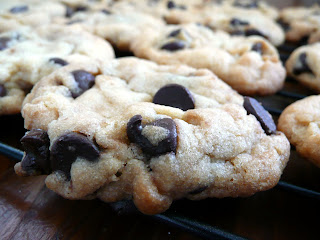 This is an almost perfect specimen. I used Isa's recipe this time around, but I cut back on the sugar a little bit because I find that by following the recipe exactly they are too sweet. I also scaled the flour down a bit too (by 1/4 cup) and it made the batter easier to work with and didn't make such a dry cookie. These babies have been squirreled away in my freezer and I take a couple out at a time. I have to do it this way, otherwise, things could get ugly.

A few days before the weekend, Jim & I stopped into Longo's. I don't shop there regularly because I find them a little pricey, but sometimes I'll stop in to snoop around because they carry some different brands that I never see anywhere else. One such item was this - 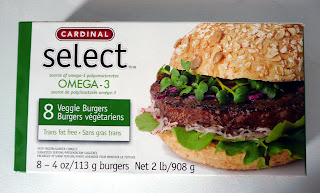 A new veggie burger for me to try. Yea! Since we were planning on having BBQ, I grabbed a box. They were $7.99 for 8 burgers. 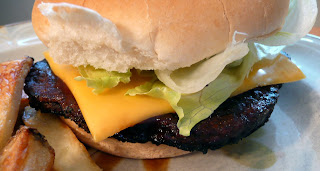 They were large, but quite flat. The texture was good but the taste was just OK. I'll finish up the box, but I doubt I'll buy them again for the purpose of BBQ-ing. Chopped up for a casserole or stew could be a possibility. 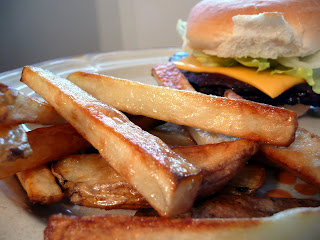 I also made oven fries. These babies were cooked to perfection. Brown and crispy on the outside, soft pillowy potato on the inside.

For my birthday, back in April, my friend Michelle got me this. 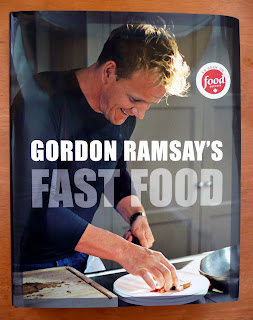 I just adore Gordon Ramsay. He's an excellent chef who wants a job done right & doesn't put up with crap. (And he used to be a Glasgow Ranger.) I was excited to get his new book, but now take a look at this!! 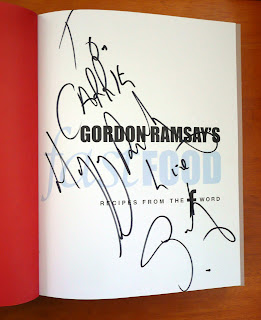 .
You can also click this to enlarge. "To CARRIE Happy Birthday Love Gordon Ramsay"
.

I've looked through this book countless times. There is a small section for vegetarian dishes, but quite a few of the recipes could be easily adapted. Since we were having burgers & fries, I decided to make one of the salads. In particular, one called Italian Leafy Salad with Walnut Dressing. 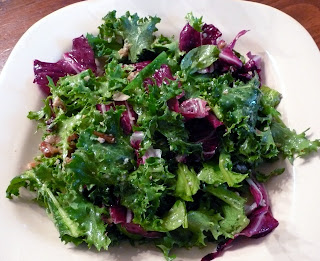 This was sooo easy to make and followed Gordon's basic rules - keep it simple, keep it fresh. There are just a few ingredients and I thought this would be reminisceint of the salad I had at Old Winery restaurant in Niagara-on-the-Lake.

I followed the directions and measured carefully because I was making this for the first time. I'm assuming it was a typo, because it was waaaaaay too lemony. We couldn't finish it all. I made the entire recipe, which was to serve 4, and split it so we could eat half now and have the other half the next day. I fixed up the remainder of the dressing so it wasn't such an overpowering lemon flavour. When I make this again, I'm scaling that part back to almost nil.

Because Canada is a country of diverse cultures, we were really having a diverse day - so why not throw in some Spanish wine. I bought this at my store a couple of weeks ago and I thought it would be good to have with the burgers. This was superb! A really nice wine that was so soft & smooth and very reasonably priced. We both really liked this. If you see it, get some!

.
Dessert was also from Fast Food and it was what one would expect from Gordon Ramsay - DELICIOUS! I present Easy Tiramisu. 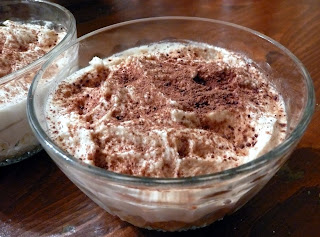 I really splurged on this - expensive lady fingers, mascarpone cheese, whipping cream, brandy, but it was all worth it. This was really, really good! Lighter than traditional tiramisu, but so tasty. 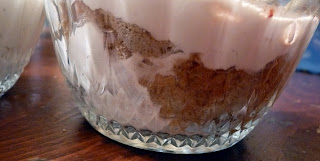 The ladyfingers were dipped in espresso laced with brandy and layered in dessert dishes with the mascarpone mixture. YUM-MY! And because the recipe served 4, we got to eat some again the next night. 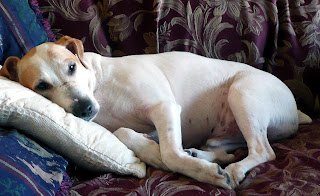 Simon was ready to pass out before the fireworks even started.

Oh, I want to also show you this. Jim went out onto the balcony and wasn't out there 10 seconds and he was calling me "Carrie, come look at this." 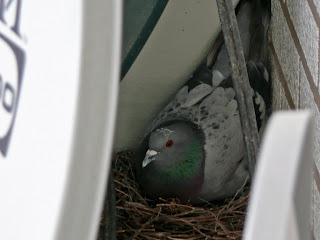 We've got a mama pigeon nesting behind our satellite dish. She seemed nervous when we were out there, so I left her some bread crumbs and we've been staying inside. Every few days I'll peek out to make sure she's doing OK. Sometimes I hear cooing, but no babies yet. We don't know how long she's been there, but at least up here she's safe and well hidden. If at any point after the hatching I'm able to get out there and get some pictures without upsetting any of them too much, I'll certainly post them. I used the zoom for this picture so I wouldn't have to get too close and it turned out not too bad. I'm so excited for baby birds!
Posted by Carrie™ at 2:07 PM 8 comments: