I started this post before I went on hiatus, so it's a bit out of date, but what the hey, I'll put it up anyway.
It ended up being a really nice day, so we took Simon to the dog park. He has so much fun up there. He knows when we're getting close because he starts crying in the truck. I guess we can't get there fast enough to suit his majesty. 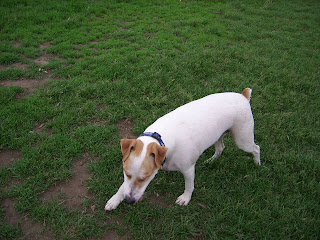 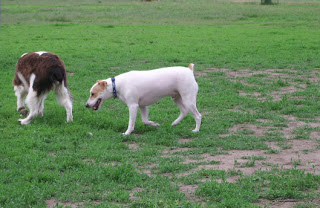 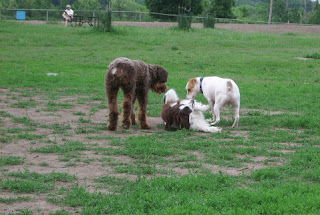 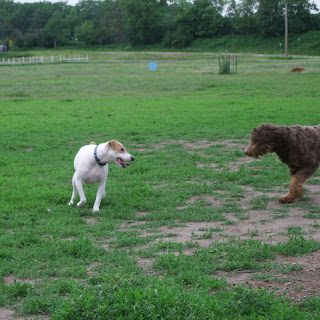 He got to play with a few new friends, and run & run & run. When we got home, he was exhausted and promptly passed out. 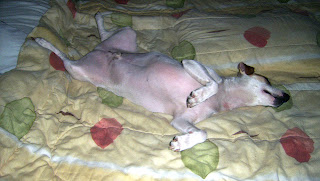 He actually is sleeping in this photo. I kid you not.
I had some VWAV seitan in the freezer that I'd pulled out in the morning, but didn't know what to do with it. I scoured the fridge & cupboards and decided on this - 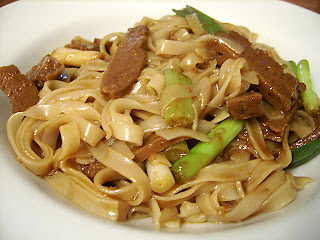 I had some rice noodles & jarred teriyaki sauce, so I sliced the seitan into strips and stir-fried it for a bit with some garlic & spices. I then threw in some green onions, tossed that around for a bit then put the seitan back in the wok along with the noodles and sauce. It took maybe 15 minutes and voila! 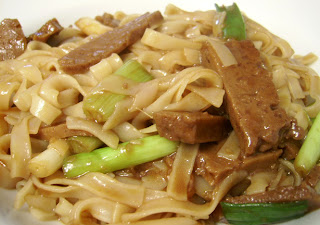 I tasted very yum. I had some left over spring rolls too that we also had, but I forgot to take a picture of them.

When Jim's mom was on holiday in Nova Scotia she went blueberry picking and came home with a flat of berries. She sent a big container over to us and man, they were good. I used some of them to make a blueberry cobbler. 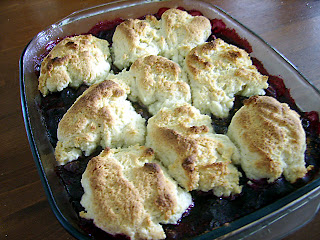 I love cobblers and this one did not disappoint. 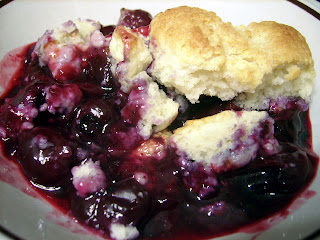 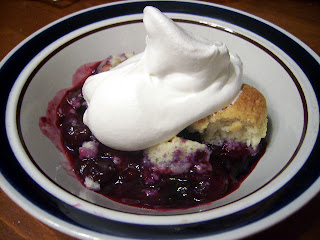 It was much improved with the addition of - you guessed it - Cool Whip!
Posted by Carrie™ at 12:24 AM 8 comments:

Helloooo! I think I'll make my way back to blogging - and I might as well start off with a yumminess. While I was away, we had 2 birthdays. Two birthdays mean two cakes! Both of these are from Dreena. First up was Jade's birthday. 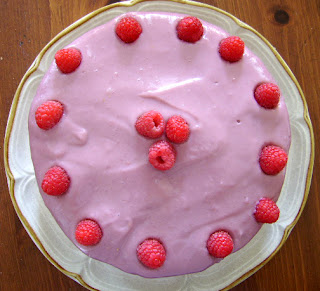 I made this cake from a recipe in Vive Le Vegan. It's Raspberry Frosted Cake with Chocolate Cream Center. This was delicious! The icing was a such a pretty colour. The recipe called for frozen raspberries and all I could find was frozen raspberries in syrup. I drained off as much as I could, but I think it ended up being a little too much liquid because the frosting was a bit runny. It totally stayed on the cake, but I didn't have to really spread it. It sort of oozed down the sides and did all the work for me. 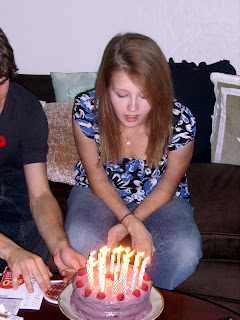 Here's the birtday girl blowing out her candles. She's all grown up now at 17. 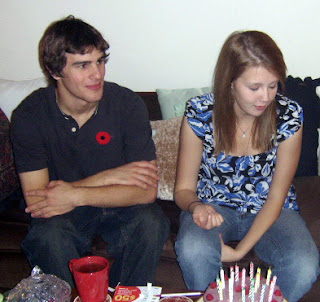 Her boyfriend, Mike, also came to our little party that was held at Mama Rita's place. I really like Mike. He's such a nice young man & treats Jade so well. (And he likes my cakes!) 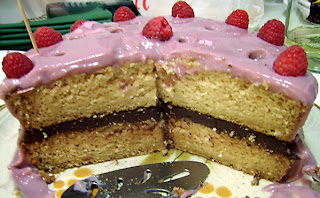 The chocolate cream center along with the raspberry frosting was a delicious flavour combination. 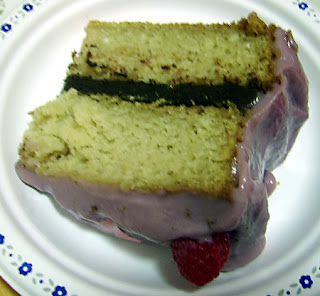 This is a shot of my slice. I took two pictures. This one, which is out of focus, and the other one which had a big shadow on it. This was the better of the two. You can see how the icing is a bit soft, but it stayed put. The cake was moist and dense and scrumptious. I will make this again!
Two weeks later, it was time for cake again. This time, it was Jim's birthday. He always wants chocolate cake with chocolate frosting. So, out comes The Everyday Vegan and my stand-by, always successful recipe for Triple Layer Chocolate Cream Cake. 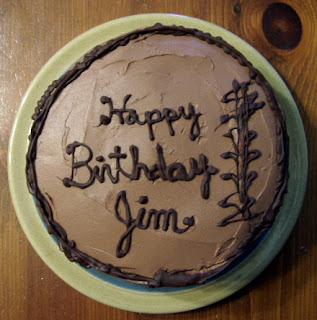 This cake is very impressive with it's 3 layers of super dark chocolate cake and lighter chocolate icing, yet it is so easy to make. 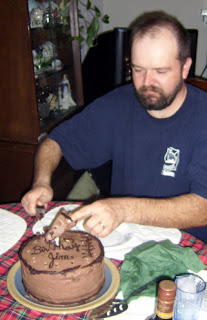 Here's the birthday boy slicing the first piece. Jim is a real chocoholic - worse than me sometimes, so this is the perfect cake for him. 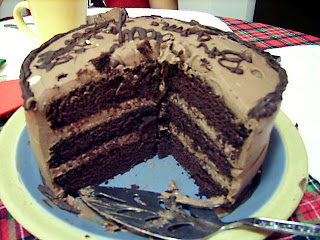 Doesn't it look marvelous? The icing is so easy and such a dream to work with. I cannot rave enough about this recipe. Follow the directions, and it's fool-proof. 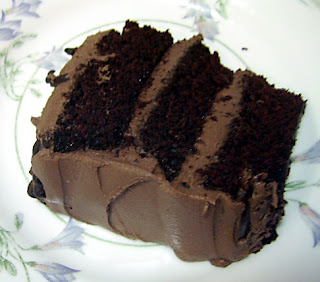