The Olympics are well underway and I've been trying to watch as many of the events as I can. To help get in the spirit, I'm wearing my super warm Olympic mittens. 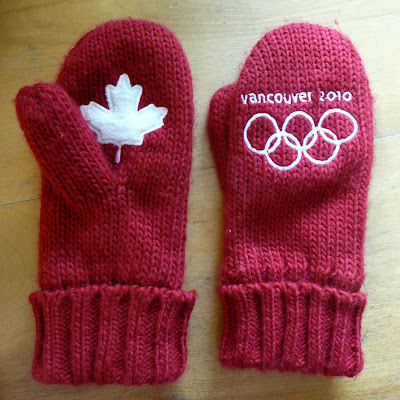 These are offically called Torchbearer mittens, and they are part of Hudson's Bay Co.'s Vancouver Olympics line. They are only $10, and the net proceeds go to support Canadian athletes. (as with all the items in the line) They are quite the hot item and are apparentley sold out! You might be able to find some still in stores. Check The Bay or Zeller's. If you can't find the mittens, there are still scarves, toques, hoodies, T-shirts, etc. so you can deck yourself out and show everyone your Canadian pride. I see people everywhere wearing Team Canada gear. WOOT!

I got a couple of new cookbooks and have made a dish from each one. 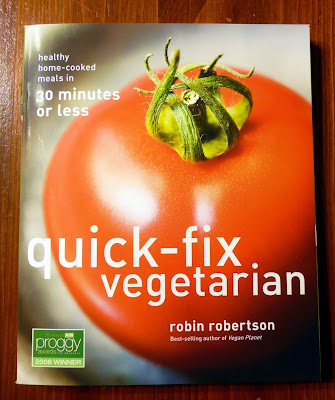 This is one of the books I got. I have 3 of Robin Robertson's other books and everything I've made out of those ones has been good. I thought this would come in handy for nights after work or days when I'm feeling lazy. The first dish I tried was this - 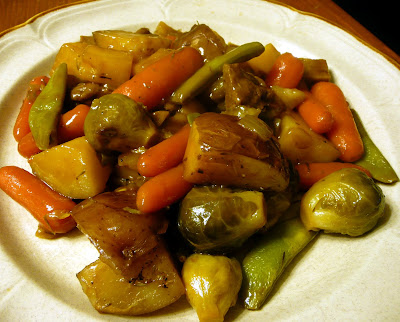 Roasted Winter Vegetables with Seitan Chunks and Brown Gravy. This was a snap to throw together! The cooking time was more than 30 minutes, but the prep was about 15. This was so good - comfort food at it's finest. 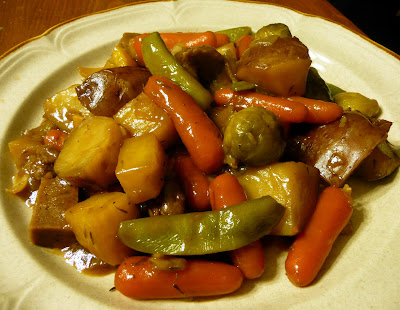 The recipe didn't call for sugar snap peas, but I had a couple of handfuls left over in a bag, so I threw those in near the end of the cooking time. This is one of those dishes that can be mixed up to suit what you might have in your fridge. I also had half of a rutabaga that I added & it all worked out just fine. 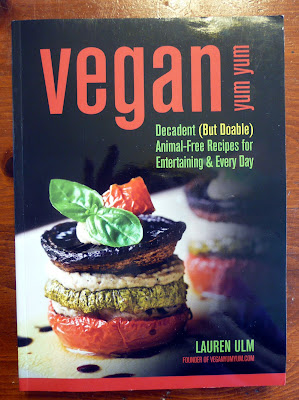 Another book I got was Vegan YumYum! If you've followed Lauren's blog, you know what fantastic things she whips up in her kitchen. 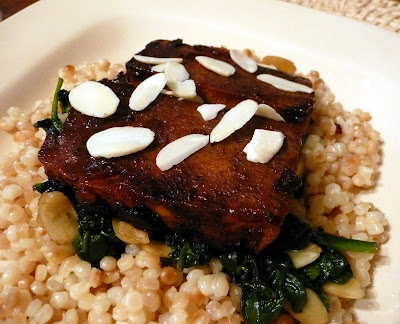 This is not a very good picture, but the dish is delicious. It's Marmalade Tofu with Kale and Lemon Pearl Couscous.
My tofu came out much darker than Lauren's. I used soy sauce rather than tamari and frozen tofu. I find if the tofu has been frozen, it sucks up more marinade than if it's used straight out of the package. 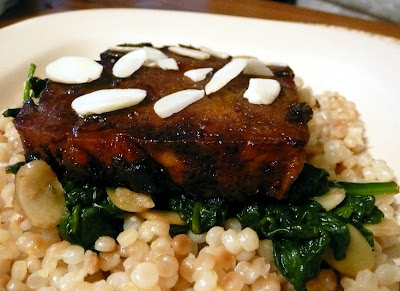 The recipe says this can also be made with seitan. I'd like to try that as well.
If you'd like to try this dish, the recipe can be found here along with a much better photo. :o)
For our wine choice, I picked this Grüner Vetliner. 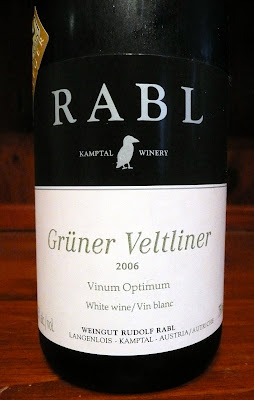 Grüner Veltliner is the most widely grown grape in Austria and is known for being a very food friendly wine. There are a lot of simple, inexpensive bottles out there, but if you've never had this varietal, splurge a little and get a decent one.

Even though we were experiencing "The Winter That Wasn't", (it finally did snow last night, but not a lot) we've had a few really cold days. When coming in from the blustery weather outside, a stick-to-your-ribs dish is what's needed to warm you up. Enter Chocolate-Chipotle Chili from The Urban Vegan Cookbook. 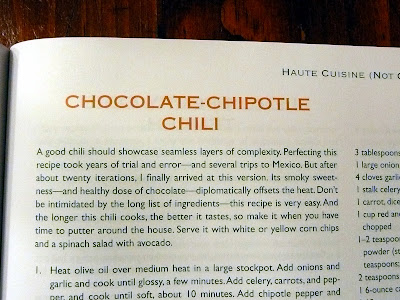 Seriously - she had me at 'chocolate.' Even though this may sound like an odd mix of flavours, trust me - chili & chocolate make a great combo. This can be made spicy if you like it that way, or not so much so if you're a wuss like I am. The flavour is still all there. 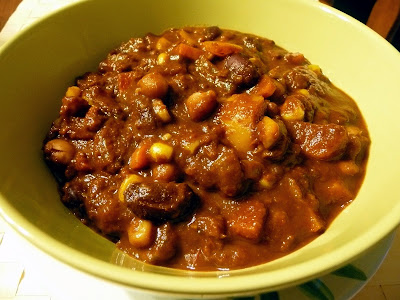 This makes a nice, thick chili, chock full of veggies & beans (and chocolate!) I took Dynise's suggestion and served this with tortilla chips that we used to scoop up the chili. It makes a terrific super casual meal that is perfect for when you want to park yourself in front of the TV and stay inside for the night while the wind howls.

We washed it down with this Swedish pear cider. The touch of sweetness offset the heat of the chili. The addition of wild berries makes this cider super delicious.

This is interesting dish I made a couple of weeks ago that was so super easy, it's ridiculous. 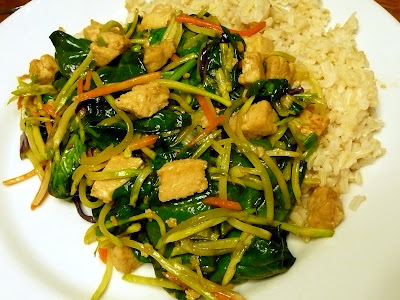 I found the recipe in a Weight Watchers booklet. It's made with broccoli slaw & spinach. The recipe called for shredded chicken, but I used Quorn Chik'n Tenders. You could use any kind of faux chicken or even tofu. This was really good! I served it over brown rice.

Since this is 'The Winter That Wasn't', the barbecue has been seeing it's fair amount of action. Who am I kidding? We Canadians barbecue in the snow. It doesn't matter the weather. 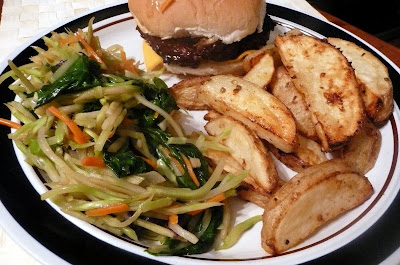 PC Blue Menu Soy Burger, Potato Wedges & the broccoli slaw & spinach without the chicken that I tried as a vegetable side dish. 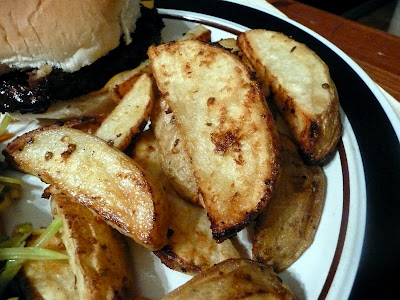 Oh, I loves me some spuds. I tossed these with a bit of olive oil, garlic & onion powder, then spread them out on a parchment lined baking sheet and baked in a hot oven. So freaking tasty! 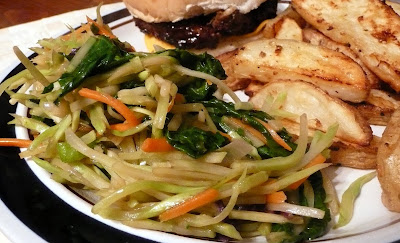 Although the broccoli slaw was good without the Quorn, I think it's better with.

Heat the oil in a large nonstick skillet or wok; add the scallions, ginger and garlic and stir-fry until fragrant, about 30 seconds. Add the broccoli slaw and cook until just softened, about 2 minutes.

Stir in the spinach, a handful at a time, and the teriyaki sauce; cook, stirring, until the spinach is nearly wilted, about 2 minutes more. Add the meatless chicken, stir through the dish and heat until chik is hot.

*I added more spinach than the recipe called for. You can, of course, use regular spinach that has been chopped or torn into smaller pieces.
** I added a bit more sauce just because I love teriyaki. I think the 2 tbsp. wouldn't have been enough. It was just barely enough for the chik-less side dish.