The old barbecue finally bit the dust. Jim went shopping and bought a nice new one. We prefer the old-fashioned charcoal kind rather than propane. It gives the food a more classic BBQ taste. 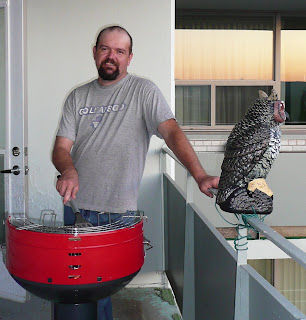 Here's the grill master doing his thing. Notice the owl? It had to be wired to the railing because it wouldn't stay upright. There are some pigeons around our area of the building, but they don't come near our balcony. This is an excellent humane option for keeping the birds away. 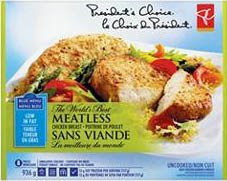 Up first on the 'cue, PC's World's Best Meatless Chick'n Breasts. I can't remember if I blogged about these before. They're made by Gardein and are a vegan product. It says on the box that they are "lightly seasoned" and the last time I had them, I thought they were just OK. Then the grillmaster worked his magic 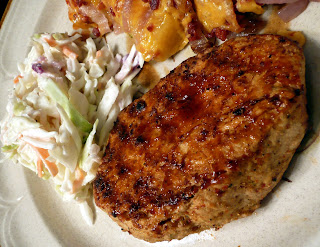 These turned out sooo delicious when done on the barbecue - with BBQ sauce of course. 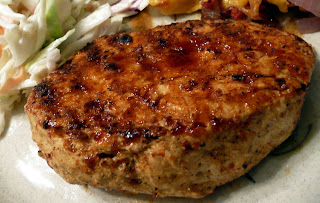 Here have another look. 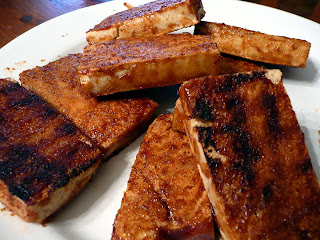 I also had Jim do up some tofu. He's never cooked tofu on the barbecue before and except for the piece on the left & the one on the right that are a little overdone, he did a great job. With some more practice, he'll be tofu grillmaster as well. 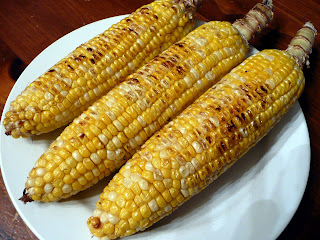 Ever since I tried corn-on-the-cob BBQ'd years ago, I don't want it any other way. This is the best way to do corn. Just a few minutes over the coals to coax out the sweetness - so easy! I used to peel back the husks, pull out the silk and then fold the husks back over the corn and cook them that way. Now I just rip everything off and throw the cobs right on the grill naked. The only thing I hate about corn is how it gets all stuck between my teeth, but indulging in fresh, local corn is very much worth it. 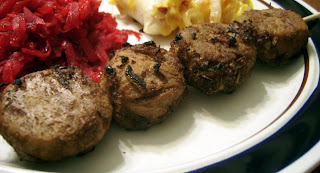 I pulled a box of Veat out of the feezer and followed the recipe on the back of the box and made these delicious kebabs. 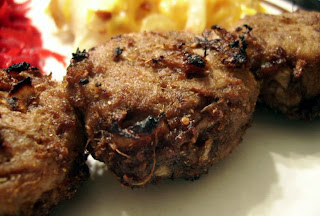 The marinade was a mixture of tamari, ginger, apple cider vinegar, honey (I used maple syrup), garlic. These were so yummy! I cut out the recipe and want to try it with tofu. 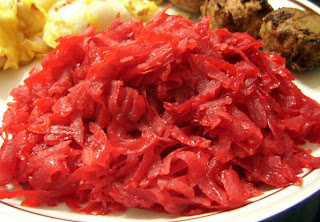 As a side, I took some of the fresh local beets I had bought and made this tangy, sweet & sour dish. It's a great way to liven up beets. You could eat this hot or cold.
.
Canadians (and I'm assuming people in other wintery climates) barbecue all year long. We don't care if it's -20C with snow all over the ground. If the craving hits us, we don our boots, coats & tuques and out we go to fire up the barbecue because nothing tastes quite as yummy as a burger done over hot coals. Good music also helps with the cooking process, so crank up the tunes while you're at it.
- segue here -
In case you didn't notice on my Twitter, I got tickets for the sold out AC/DC concert in Toronto. They are in town on Nov. 7 which is 3 days after Jim's birthday, so it's part of his present/celebration. Although I've been a fan for many years (I have albums on vinyl. Adam Bentley gave me Back In Black one year for Christmas. I think 1980 or 81!!) I've never seen AC/DC live and I just love Angus so this should be a great way to top off Jim's 39th (gasp!!) birthday. How about a retro video? I'm on a video kick lately so what the hey. I really like some of the old stuff with the late Bon Scott on vocals. So here's an AC/DC favorite - 1979's Highway to Hell. This track is especially good to play while grilling some peppers & zucchini. Hell, Fire, Hot, Barbecue. Get it? OK, that was really bad and really lame. sorry

I was working on a food post, but I heard some very sad news - Richard Wright of Pink Floyd has passed away.

I guess now there is no hope of a Pink Floyd reunion. I'll be spending the day listening to my Pink Floyd library with a very heavy heart. Rest In Peace Richard, and thanks to you for your contribution in making this gal's world a little nicer.

What's Carrie Been Up To 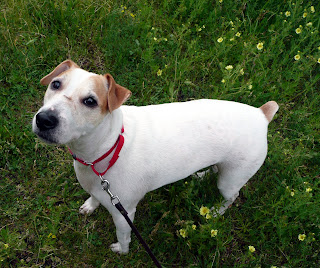 Hey there! Where's Mommy been?
.
I've had a pretty busy week, and I hope this rather long-ish post makes up for my absence.
Saturday night we went to The Dicken's for some drinks and to check out the band. Gotta support local indie musicians. 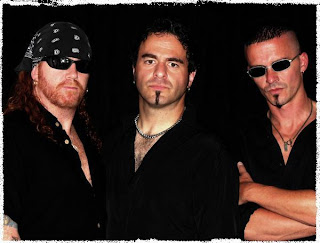 Paul, the guy on the left, is a customer of mine and he invited us to go down. I brought some friends along, so about 6 of us hung out for the night. The band sounded really good & as he promised, Paul slipped me 2 CD's of theirs. If you'd like to hear a sampling, they have a MySpace page here.

Last weekend, a bunch of us from work decided to have an End of Summer Pub Crawl. We all had so much fun! It was a night to wind down & be silly, even though a few paid the price the next morning. I was not included in that category. I didn't over-indulge because I hate the hangover. 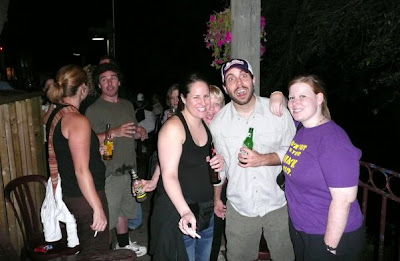 Matt on the other hand (in the baseball cap) was a different story. HA! 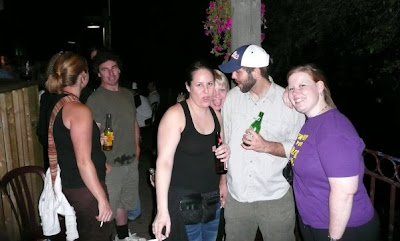 Can you see me in the picture? :o) Told you it was time to be silly.

Friday when I came home from work, there was a package for me in the mailbox from Sarah Kramer. Look what was inside! 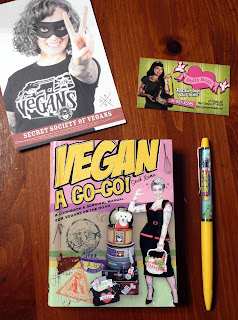 She had copies of her new book available for pre-order, so I ordered one and it came with a postcard and a super cool pen! It was hard for me to show you exactly how cute the pen is so check it out in this video. 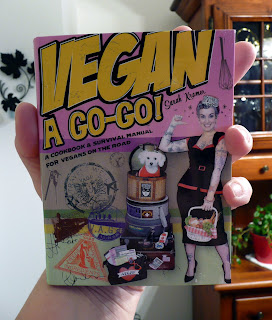 Look at how small this book is. It's a travel companion for vegans on the road. It fits in my hand, 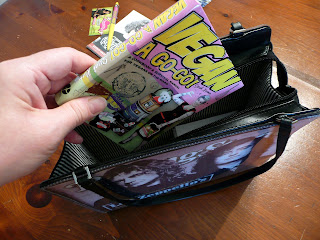 and I can tuck it into my purse to take with me anywhere. I can just whip it out at the grocery store and see what I need to buy for a specific recipe. Excellent!
I like to have a few choice convenience items on hand for those nights when I come home and I just don't feel like cooking. This is one that saved my butt last week. 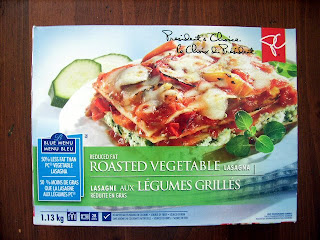 The label says "suitable for vegetarians" - perfect! The picture on the box looks so delicious, don't you think? 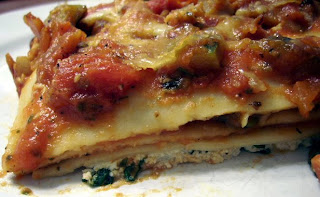 But once you actually get it home, bake it and cut it, the layers look more like this. 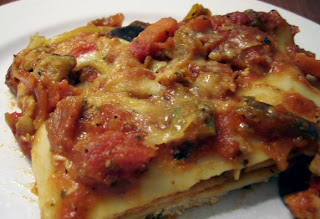 Granted, it did have a lot of chunky vegetables in it and for frozen, it was pretty good. I would buy this again. 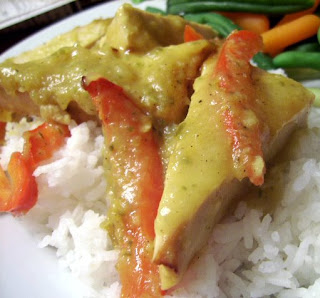 A dish that made yet another appearance on our table last week was Mango Ginger Tofu from VWAV. 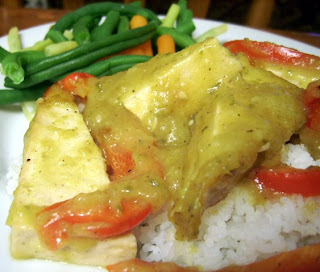 I made the marinade up in the morning and let the tofu sit in it in the fridge all day and then just baked it when I got home. Easy as anything! If you have not made this yet, my big question is WHY? It's not a lot of work and it is sooooo delicious! 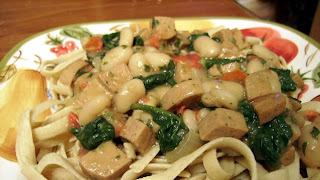 Up next- something new. This is Fettuccine with Sausage and Arugula. It's a Weight Watchers recipe that sounded interesting, so I just substituted Yves Italian Sausage for the sausage called for in the recipe and used vegetable broth instead of chicken broth. 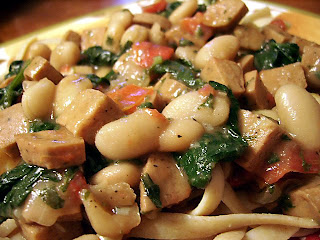 This dish is packed with protein and it was a great way to get Jim to eat some greens. Instead of arugula, I used spinach. With a salad on the side, it made for a satisfying meal. I'll post the recipe if you'd like to try it.

Anyhow, that's some of what I've been up to this past week. What's happening this week? Who knows! Time will tell.

Fettuccine with Sausage and Arugula

Cook the fettuccine according to package directions.

Meanwhile, spray a large non-stick skillet with non-stick spray and set over medium high heat. Add the sausage and saute until lightly browned, 3-4 minutes. Transfer to a plate.

Heat the oil in the skillet over medium heat. Add the mushrooms, onion and garlic; cook, stirring frequently, until golden, about 10 minutes. Add the beans, broth, arugula and the browned sausage; bring to a boil. Reduce the heat and simmer, covered, until the sausage is heated through and the arugula is wilted, about 2-3 minutes. Stir in the tomato, basil and pepper and cook for another 2 minutes. If mixture is too dry, add more broth.

Serve with the fettuccine – either spooned over top, or tossed with the noodles.