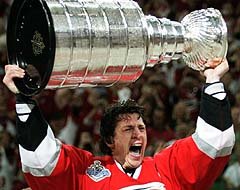 Good game (Carolina 2, Edmonton 1), great series (Carolina 4, Edmonton 3). I'm glad some of the older guys like Rod Brind'amour, Glen Wesley, Mark Recchi, Ray Whitney, and so on, finally got their names on the Stanley Cup. Very nice. Thanks guys for hours of frustration, exhilaration and entertainment. See you in October. 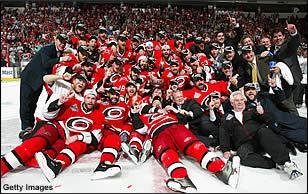 that's a really cool photo! love the suits on ice.

I was a little sad last night....
Edmonton just couldn't keep up with North Carolina. NC really did deserve the win, but I wish Edmonton would have put up more of a fight!

And for next year, I say:

Vicki, I don't know if you get much hockey where you are, but it's the traditional team photo that it taken after the Stanley Cup has been won and skated around the ice (which they didn't do - that's another rant all together).

Megan, too bad you were in Italy when Edmonton won games 5 & 6. They were trying real hard. Guess it just wasn't their time.

Kleopatra, You probably get more of an inside scoop than I do, but then again, I live in hockey Mecca, (Detroit says they're 'Hockeytown', well Toronto is 'HockeyCity'.) and I've heard some grumblings already about trades, etc. July 1, baby and they'd better be doing some big time wheeling and dealing or it will be 41 years for the Leafs.
Thanks for the Go Leafs, eh. At this point, they need all the help they can get.