Back To The Drawing Board

My husband is Scottish-Canadian. He is the first male in his family born outside of Scotland. His family hails from Peebleshire which is in the Lowlands very near the Borders. There is even a castle there bearing his family's name. What's left of it anyway. Hell, his name is James. Middle name is McIntosh. Aye!

He's been eating haggis since he was a wee lad and I wanted to try and make it for him, but I wasn't going to be messing around with any meat. Low and behold...Bunnyfoot wrote about a vegetarian haggis that she made and so I thought I would give it a try. Traditionally, it's all stuffed into a sheep's stomach and made like a big, stubby, fat sausage. It sounds weird and disgusting to some, but I've had it before (when I ate those sorts of things) and it is very good. If not for the description, it may have caught on. But I think the Scots like having it for themselves.
I was curious to see how close it would come to the real thing. This one, obviously, isn't stuffed into a casing, but made in a casserole dish. Jim said his Gran, Mary McIntosh, who immigrated from Edinburgh, used to make haggis quite a lot. Making it the traditional way is mainly for ceremony and special occaisions (Robbie Burns Day). Gran would make it for Sunday dinner and just pack it into a casserole dish. I guess in a similar fashion as North Americans having a big turkey feast at Thanksgiving and Christmas, but a roasted chicken for Sunday dinners. Not so fancy or with all the frills. 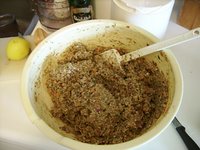 I started mixing it all up and the recipe called for 2 cups vegetable broth. That seemed like quite a bit as the mix was already a pretty good consistency. 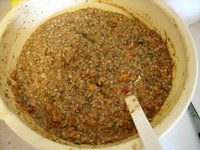 I cooked it for 45 minutes and it was still kinda gloopy, so I left it uncovered. After about another 45 minutes, it seemed to thicken up only a teeny bit. This was not looking good at all.

Haggis is usually served with tatties (potatoes) and neeps (turnip) and scotch. We had tatties with roasted carrots and asparagus. We're not big fans of the neeps, unless they're in a soup or a stew. Jim had a wee spot o' scotch before dinner. I don't like scotch, so I passed on that. 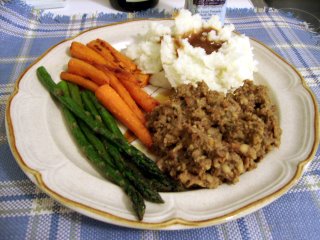 It doesn't look too bad in the photo, but in the end, the haggis was a bust. The consistency was wasn't right and the flavour was just all wrong. It was too sage-y or something. I ended up throwing the rest of it out. I haven't given up though! I've got a good starting point and a few ideas so we've not seen the last of haggis!

**I don't even want to talk about that ridiculous display that they called a hockey game. Only one team showed up to play and it certainly wasn't the Oilers.

Haggis?
: P
Well all I have to say is youre a GREAT wife hehe

the photo looks delish ~ like stuffing ~ thanksgiving dinner. lots of traditions & even a castle?! you are such a cool wife to make the haggis. <3 the hockey update!

How nice that you attempted something so... ummmm... un-veg! I read about when Bunnyfoot did it as well. All i can say is that i am SO glad i never have tasted the real thing! Carrie, it was good, you say?! I ate a lot of weird meat stuff as a kid (once i even had tongue, not knowing that it really WAS tongue... i'm STILL horrified to this day...) but never had haggis.

Good try by you! And the fixin's look fantastic, by the way.

hey - good try on the haggis. Worth a shot!

I know, that game was horrible. My heart was broken. I don't know how real hockey fans can handle all the ups and downs!

shit. that looks like stove top stuffing! and that ain't bad!