On To Game Six

Holy crap! Have I been busy. Things have been non-stop since Sunday. I worked at the wine store all day and then we went to Mama Rita's for Father's Day celebration because Jade won't be here this weekend. We were treated to Chinese food. Very yum! From then on in, I've been home pretty much only to sleep. Worked both jobs Monday, worked all day Tuesday then had a wine tasting at Paletta at night with a chiropractor's appt. thrown in there. Wednesday I was at work a bit late. It wasn't a really good day. We had to reprimand 3 employees and write them up. Rotten to do, but has to be done.
Then it was off to get groceries in for the weekend. It's Sound of Music Festival this weekend and I don't want to have to drive any where near downtown! The carnival rides are already set up, along with the Port-a-Potties and we could see them constructing the stages as we drove by Spencer Smith Park. We're a block away so I'm sure it will make for an "interesting" weekend. I'm working all weekend, so I don't know if I'll be able to partake in any of the festivities.
On Saturday night, I'll be watching the hockey game anyway! Woo-Hoo! 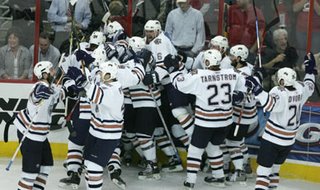 We were almost sure that the Stanely Cup was going to be awarded to the Carolina Hurricanes last night, but Edmonton came out and scored 16 seconds into the game. It was back and forth from there and it was a very good game (except for the excessive

amount of penalties). The game went into overtime and Fernando Pisani who is from Edmonton, scored short-handed on a breakaway just 3 and a half minutes into overtime. And get this - Pisani's breakaway goal was the first overtime, shorthanded goal in Stanley Cup Final history. He's the hero in Edmonton today. If you click this link you'll be able to watch a clip of the goal. It will probably only be there for a short while since it's on the home page of the Oilers website. Because of that goal, my plans for Saturday night have been secured.

Since I haven't been home much, there wasn't much cooking going on. But here's something fun. Jim brought home some new snacks he found. 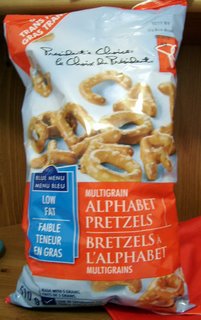 When Jim showed me these, I said "Ooo, we can spell bad words." These pretzels are great TV-watching munchies and fun to eat. 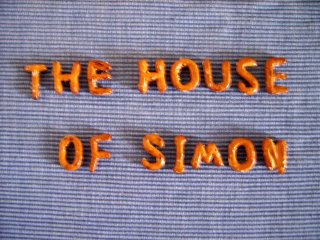 you are too funny.

that was cute. and clever. did you eat your words?

i usually hate when i have to do that but i'd make an exception in this case...

Carrie, what a great post. Love what you did with the pretzel alphabet. CUTE!

I'm dealing better with my topsy turvy world because of peeps like you two!

haha great game food. and I like that pic alot. you could even use it as a banner.. it's great

still hanging in there, eh?

Wish my team was still in it...but there is always next year.

I really want to go to a music festival...in a bad way. It's been too long!

Hope to see you in vegginout soon!

Well, Harmonia, you know my team is the Leafs. They didn't even make it to the playoffs this year. They sucked reeeeaaallll bad. So, hockey rules (unofficial anyway) are that if your team is out, you cheer for the last Canadian team standing - even if that includes Montreal, I guess. ;o) If no Canadian teams are left, then whomever you like. If Edmonton doesn't win, then Carolina is more than deserving. Rod Brind'amour has been outstanding. He's been playing for a long time and I would like to see him get his ring. Also, Carolina has never won before. Edmonton has won numerous times already. (Think back to Gretzky days). Either way, I won't be TOO disappointed. I'll only be disappointed that there's no more hockey for 3 1/2 months!

Sorry, not following the hockey stuff ever since they took the Minnesota North Stars away from us. The MN Wild are cool and all, but after the strike, kinda boring.

Those pretzels look so fun. My daughter will love them. I'm going to look for them for a fun snack.