Beyonce Has Dinner With PETA 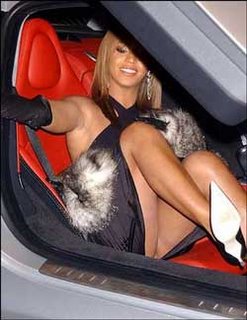 Below is from E! Online

Unfortunately for Beyoncé Knowles, she couldn't guess who was coming to dinner.
The singer was taken by surprise Wednesday when she dined with some people she believed were fans who had won a meal with her in an eBay auction, but were actually representatives from the People for the Ethical Treatment of Animals, which, unbeknownst to Knowles, had placed the winning bid on the dinner date.

The organization claimed it had repeatedly tried to contact Knowles by fax, mail, taking out a full-page add in Billboard and even staging demonstrations outside her concerts to no avail. So when the opportunity came up to share a meal with the star, the group jumped at the chance.
According to a release issued by the organization, the PETA activists were picked up by car and whisked to swanky Manhattan eatery Nobu 57, where they used their time with Knowles to grill her about using fur in her House of Dereon clothing line and in her personal wardrobe.

To break the ice, one activist reportedly began with an appeal to the ex-Destiny's Child singer: "Beyoncé, many of your fans would like to know why you don't care about how minks, foxes, and chinchillas are gassed, strangled, and electrocuted for vanity and if you might have it in your heart to recognize that fur is not only cheap and tacky but also horribly cruel."

Video of the conversation, available on TMZ.com, shows a stunned Knowles refusing to respond to the queries and asking others in her group, which included her mother and sister, to do something about her less than welcome guests.

"I don't think people would not like you if you didn't wear fur, you know what I mean? You're so gorgeous, you don't really need to kill animals," one activist persists.

PETA also claims that its fur opponent managed to whisk out a portable DVD player and show the singer footage of animals being trapped, drowned and electrocuted for their pelts.
Eventually, the PETA people were escorted out, despite their claims that they "respect [Beyoncé's] work."

The group used the dinner to draw attention to their FurIsDead.com Website, which, unsurprisingly, promotes an anti-fur agenda.

A spokesperson for Knowles said she had no comment on the incident.


The video is here.


This comes out on the heels of a ridiculously, stupid story about Jay-Z and Cristal champagne.

Carrie, please check your mail at Veggin' Out when you can. :o) Muy importante.

Done and done! I hope it was rectified in time. Let me know that it's safe.

I read this in Animal Times from PETA, Love it.

whata spoiled brat! (& skanky!) awesome post, carrie, out them all!

Carrie - great post. I had read the headline, but not the story until now.

Hahahahahaha about the Jay-Z stupid Cristal ban. It's so "high and mighty". Ryan and I listen to Jay-Z and ever since we heard about the Cristal ban, we have fun making up stories about other products he may ban that he constantly raps about...what's he gonna do? Start driving a regular car after boycotting Caddy's, Benz's, etc.?

YOU
ARE
FAB
XOXO

All is well and I appreciate you!!

BUT the good news is Paris (yet another skank but now a GOOD skank) has sworn off fur.

she watched a peta video and we all know how upsetting tha tcan be.

course, i'm sure her resolve is about as solid as a snowman in arizona...

I saw that.. don't even get me started about fur.

Seriously, WTF? I saw the video on PETA's site - power to the people.