An Assortment Of Things

Last week, I went into the hospital for a colonoscopy. My mother survived colon cancer over 6 years ago, so as a precaution, my family doctor booked me in with a specialist to have this done. It has become so routine now, that a lot of people I know have had it done. Of course, they proceed to tell me awful horror stories of what happened to their mother's cousin's friend's aunt and how the prep is unbelieveably awful and the procedure is embarrassing and painful. I already knew Dr. Kancherla from working at the hospital and after visiting her as a patient in her office for my consultation appointment, I felt quite at ease and wasn't worried about the procedure at all. My concern was the preparation.

I was booked in for 12:30pm on a Wednesday, so Monday night before I went to bed, I had to take 2 laxative pills. They did their thing Tuesday morning and I was only allowed to have a breakfast, then clear fluids until after the procedure. I went to work and drank lots & lots of water and juice. Even pop was allowed, so I downed a couple of Sprites and a Root Beer just to keep my day interesting. At 6pm Tuesday night, I mixed up the first package of sodium picosulfate (called Pico Salax) that was supposed to have a refreshing orange flavour, but just tasted like really weak Tang gone bad. After choking this down, I was supposed to wash it through with 8 large glasses of water or clear fluid. I didn't know what to expect at this point. I was envisioning a horrible night in the bathroom for hours with painful, body-wracking cramping, and me wishing I was dead. You know what? It wasn't bad at all. We're all friends here, so I will say, I wore track pants for quick removal & wish I'd had some baby wipes instead of regular toilet paper. That area got a bit tender after a while. Most of what passed was liquid because that's all I'd put in my system all day. Oh, another thing - if you're going to pass the evening watching TV while you wait - get a TiVo. I did't miss one second of the program I was watching! I love our TiVo.

I got up early on Wednesday and had the second package of Tang-From-Hell then off I go to the hospital for my procedure. One disadvantage to working there is everyone knows you and are curious as to why you're there, but also, very concerned that you're OK. I knew the nurse and the anesthetist, so there was a lot of chatter going on which helped to keep my mind off what was coming. Dr. Kancherla said that rather than just a sedative that keeps patients awake, but a bit loopy, she prefers to use general anesthetic so there is no anxiety at all on the part of the patient. I've never in my life had a general anesthetic so I was a teeny-tiny bit nervous about that part. Once I was hooked up to an IV and had monitors stuck all over me, I told John that I had never had this done before and it was a bit of an adventure. He said "No problem. I'll give you a play by play as we move along." Dr. Kancherla came in and asked how I was, etc. etc. the usual banter, then she said "OK, we're going to get started." She got me to turn on my side and I saw John putting a syringe into the IV line. He said "Just rest your hand here on the bed rail." and that's the last thing I remember. No drifting off, no feeling groggy, just BAM! and I was gone. I came to as he was wheeling me back to my little room asking me "How are you doing?" I felt like I weighed a million pounds and most of that weight was in my tongue. I think I slurred out a "Fine" and drifted off again.

The procedure went well. One polyp was found and removed and everything else was great so I don't have to do this again for 3 years. Jim picked me up and when we got home, I was starved, so Jim Can Cook - part deux! This installment isn't nearly as impressive as the first one, but to me, it was just as good and was just what I wanted. 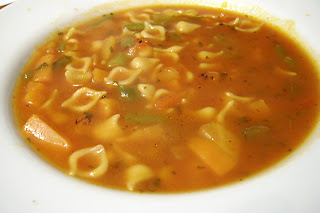 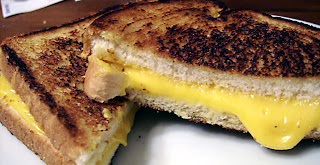 I asked for soup and grilled cheese. The soup is from a can, and it's pretty good. It's Primo Roasted Vegetable. Does the bread look overdone to you? Not to me. It's almost perfect. (a little darker than I like, but still good) I like my toast good and toasted. Jim prefers his very lightly toasted. That's not toast; that's warm bread.

When I was out yesterday morning, I saw the sun coming up over Lake Ontario. I just happened to take my camera with me in case I saw anything interesting. The picture is not nearly as pretty as it was live. 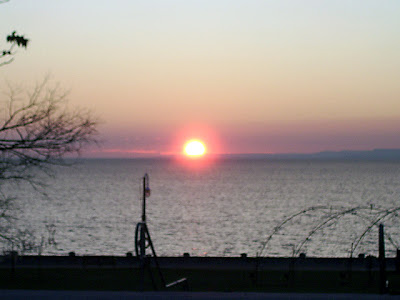 When I got back home, I wanted muffins. So I made some. These are As-You-Like Muffins from Dreena's book The Everyday Vegan. 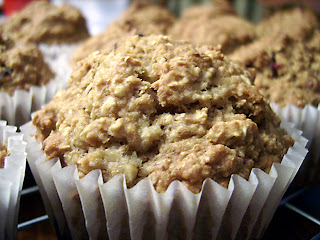 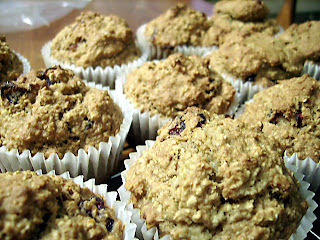 Today I felt like dried cranberries and toasted pecans, so that's what I added. These muffins turned out great!

I was also craving some chocolate macaroons, so I made those too. These are cookies of my childhood. I remember being very young and going to visit my mom and she always made these for me. Of course I had them a lot at home growing up too. 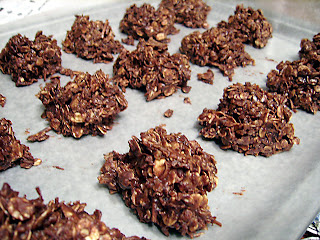 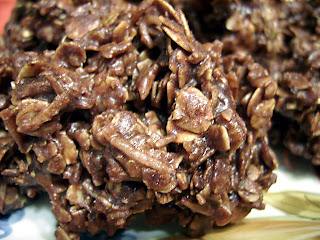 These are so unbelievable easy to make and there is no baking! (Leslie would like that!) These are not vegan cookies but I think you could veganize them easily enough. They contain milk which is mixed with sugar and shortening and has to boil for 1 minute. Can you boil non-dairy milks? I'd be happy to supply the recipe if someone is interested.

I also wanted to include this - Orange Lacquered Tofu. 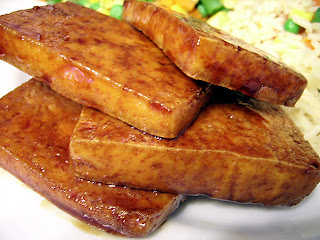 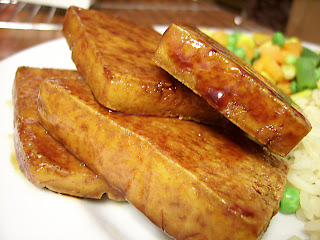 I got the recipe over at Cafe Cyan. Crystal had blogged about it a couple of months ago and it sounded so yummy, I printed off the recipe. This is quick and easy like she says. And it is very tasty. I took the leftovers to work the next day and even though the outside wasn't crispy anymore, the sauce had really soaked into the tofu and it was still delicious. I will definitely make this again. If you'd like to give it a try, the recipe is here.

Did you see the Golden Globes? Bryan Adams was nominated for Best Original Song - Motion Picture for the song he co-wrote for the movie Bobby. He lost out to Prince for Happy Feet. I guess if you're going to lose to someone, there's not many bigger than Prince. But did you see Bryan on TV? He was wearing a suit and no tie. Bry, Bry, Bry....am I going to have to come over and dress you? It's a sacrifice I'm willing to make. *sigh*
Posted by Carrie™ at 10:36 AM

I had a colonoscopy done a few years ago too, but I would describe my prep as awful. I only had to drink one mixture of the fizzy-drink-from-hell, and after that, it was all a blur from the toilet and back. The procedure itself wasn't too bad, and luckily they didn't find anything.

I also had some canned soup afterwards, but unlike you, I did not go on to cook up a storm! Holy cow, you made some good looking stuff. That tofu looks awesome, so juicy and moist.

glad to hear you made it through OK - thanks for sharing this with us so that we can know what to expect when our time comes. jim is so sweet to you and the soup looks perfect, as do those chocolate macaroons -- i really love coconut. :o)

Carrie..thanks so much for sharing! My mom is supposed to get this done for the first time, but I know she's been putting it off. I'm going to print this out and give it to her so she'll know what to expect...

oh Carrie you are sooo very brave for living it and then posting it! my dh is now 51 and I have been trying to get him to go in and get it over with! ahh.. but, in our small town I think that it will require a trip to Seattle. My mom has yet to do it either.. She is afraid of that tang from hell... she is a breast cancer survivor .. So she shouldn't be afraid of anything.. now should she? anyhoo..I applaud your candidness and courage! Bravo!
ohh and give your honey a pat on the back for cooking AGAIN!
Take care..
Julee

Glad the results are good and you won't be drinking "Tang from hell" for awhile.

I remember that tofu recipe and you posting it made me want to head over to look it up on Cyan. The cookies look great and I think we could veganize, so please post.

To answer your question regarding the veggie ribs. The ones in the picture were a mix from HarvestDirect. Linky at Cosmos Vegan

I've also made them from scratch based on a recipe that other bloggers turned me on to. Linky

Glad to hear all went okay with your medical visit. What great food to have for when you came home! Loved your no bake cookies... you can boil soymilk. The recipe would be great when you have time. :)

Glad your procedure went well. Tivo is availble in Canada? I need that bad!!

Carrie - what a great post. You are so open and honest and lovely. I'm glad everything went well for you. You really cooked up a storm afterwards. I'm with you on the toast...I like mine almost burnt and my boyfriend likes his barely toasted....I call that stale bread!

Mm...macaroons have such a good childhood memory for me too.

I'm so glad you shared this with us.. hopefully, it will lessen the fear of this test. I had to drink a gallon of this horrific salt water stuff before surgery once.. oh my god.. it was horrific. I shudder to think of it to this day.

Your food looks great.. that tofu.. you can just tell it's good.

.. oh and the pic of the sun over the water is beautiful.. I'm sure it was much more breathtaking in person, but it is still mighty breathtaking.

Thanks for sharing this story, Carrie! I think the more information we have, the more confident we feel about these mysterious medical procedures. I'm glad everything is o.k. with your health, and I'm loving that picture of the sun. Cheers!

I'm glad to hear everything went well with your colonoscopy. Sounds like miserable prep work though! Yikes!!!

I'd love the recipe for those cookies. Coconut macaroons are my favorite cookie ever and I think your version sounds terrific.