A Little Bit of Christmas Cooking

I'm a little bit behind with my Christmas posts. I worked almost everyday between Christmas and New Year's, so I have an excuse. The store was open on New Year's Eve from 11am-6pm and you wouldn't believe how many people showed up at 5:45pm and were totally pissed that almost all of the champagne/sparkling wine was sold out. I always have bubbly on hand but even if I didn't, I certainly wouldn't wait until the last minute. Anyhow, I hope everyone had a wonderful New Year's Eve. We visited with our friends Michelle & Joe for a couple of hours. Michelle has been sick all over the holidays, so we didn't want to stay too long. She needs her rest. We then came home and watched Dick Clark's New Year's Rockin' Eve and had Riblets. Aren't we such the party animals!?

On Christmas Day, we had dinner at Mama Rita's. Aunt Peggy was visiting for Christmas. 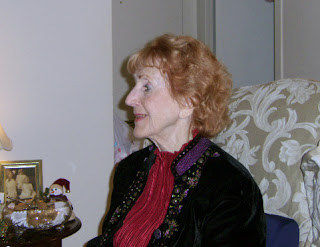 Jade arrived early Christmas afternoon. Here she is looking as lovely as ever! 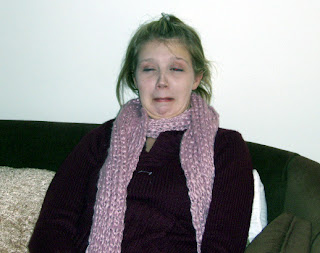 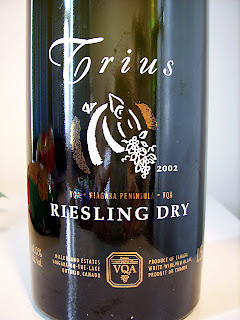 Jim & I had picked up the bottle of Trius Dry Riesling on one of our many trips to Hillebrand winery in Niagara-on-the-Lake. We'd had it for a few years and decided to break it out for Christmas. After all, it was a 2002 vintage, but the real treat was the size. It's a 1.5 litre bottle! 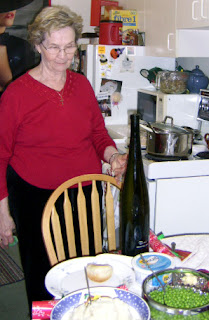 Mama Rita was eyeing it with delicious delight.


We usually share the cooking duties. Ahead of time we'll talk and decide "OK, I'll do this and you do that." It's worked out really well over the years. One cook isn't overwhelmed trying to make everything. Because I'd been so tied up with work, Mama Rita took most of the load this time. She had made a pan of her delicious vegetarian lasagna for herself and Peggy to have on Christmas Eve and there was enough left over for me to have with Christmas dinner. There was the usually Christmas fare: turkey, cranberry sauce, gravy, potatoes, stuffing - with some left separate for me, and veggie gravy, pickles, rolls, and so on. I contributed some of the dessert sweets. From Vegan with a Vengeance, I made Coconut Heaven Cupcakes. 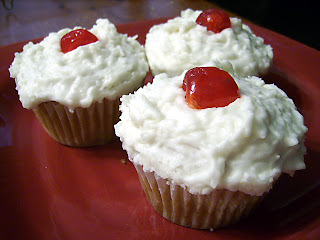 I made these in the summer when we had our Christmas in July party at the wine store. They were so good that I wanted them again. Cupcakes are easily portable and after a big meal, much more appealing that a big slab of cake. 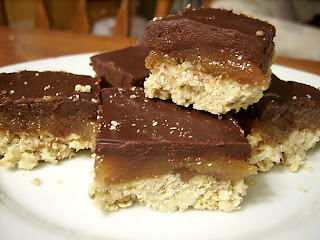 I also made these. Chocolate P-Nut Butter Squares from Vive Le Vegan. These were so simple to make and took almost no time whatsoever. And they are delicious! The combination of chocolate and peanut butter is one of the best!

I also made a Cranberry Orange Nut bread but forgot to take a picture and now it's pretty much gone. I was in charge of vegetables as well and had requests for roasted carrots and beets. The beets I make from a Weight Watchers recipe that always turns out great. I'll add the recipe at the end of the post. 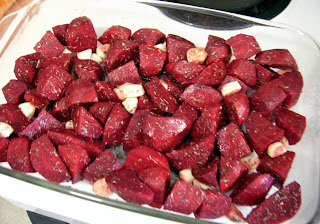 Here they are going into the oven. 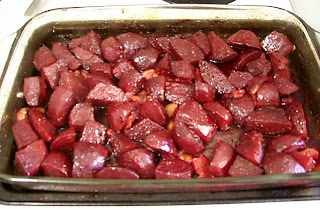 And finished! All of these dishes were easy to transport over to Mama Rita's and the veggies just needed a zap in the microwave to be reheated. 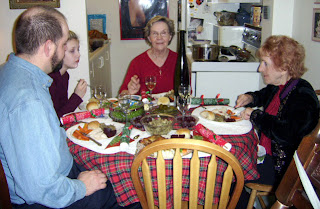 Mama Rita set a pretty table. This picture was before we did our Christmas crackers and put on our silly hats. I forgot to take a photo of that too, darn it! The meal was great and it's my favorite part of Christmas Day because everyone is together. This is a much smaller gathering than we used to have back home when I was young, but just as nice.

In a small bowl, combine the orange juice and 2 tablespoons of water (I usually just skip the water) and pour over the beets. Cover with foil and roast until tender, 45-50 minutes. Remove the foil and roast 10 minutes longer.

**If you use fresh thyme, you can sprinkle some on beets before serving. I use dried, so I don't bother. I'll sometimes sprinkle chopped parsley on top though.

OMG...I've been eyeing those PB and chocolate bar's in Vive...now I must make them.

I really really haven't had good experiences with beets before. But yours look delicious. I may have to reconsider...

The desserts - Oh My! I have such a sweet tooth.

Everything looks so good.. I will definitely make those bars for my kids... and try to stay out of them!

I love roasted beets.. thyme sounds wonderful with them..

Reisling is my favorite wine! That bottle looks like it would be right at home on my table.

OMG- I love beets! Thank you for the recipe. And it was lovely seeing the photos of the cozy Christmas meal that you and your family shared. =)

beets. not a fan of beets. but that's thanks to my juice fast. i wont' go in to details.

but PEANUT BUTTER BARS...now THOSE i love!

OMG that bottle of wine is hilarious! Happy New Year. I love your Christmas cupcakes! Those squares look really yummy too!