Michelle and I decided to get together for the afternoon so we could spend some time hanging out before she heads off to Calgary. I gave her the bottle of wine I picked up for her last weekend and she was very excited about it. I hope she likes it.
We started off with lunch at Pane Fresco. J did some work for these people before they opened the store and we've been hooked on them since then. They make the best bread in Burlington! Michelle had a salad with walnuts and goat cheese and I had a roasted vegetable sandwich on a baguette. They had also made fresh apple pies that morning and they must have been taking lessons from that cheese because those damn pies were calling out to me. So I bought one. I thought it would be a nice weekend dessert treat. Oh my goodness...it was sooooo good. There are still 2 pieces left for tonight.
Michelle wanted to get a shelf for her bathroom so we went to our favorite store, IKEA. We stopped first at the "as is" section, just to check it out. There was a Leksvik corner cabinet that caught my eye. It looked OK and we did a good inspection on it. I had 2 very small scratch 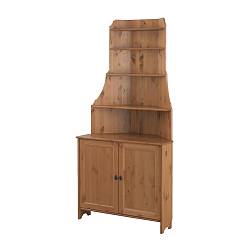 es on 2 of the shelves which could be easily covered up, if noticable to anyone else at all. And darn it all, it was already assembled. Saved me the trouble of having to put it together. I've been looking for something to put in the kitchen that I could put the microwave on and that would give me some extra storage space. This looked like it would serve the purpose nicely, and I really like their Leksvik line. This cabinet sells for $249, but I got it for $159! They held it until J got home and took the truck over to pick it up. I LOVE IT! What a deal! It sort of outshines Michelle's $15 bathroom shelf and the $7 t-shirts I picked up later at Wal-Mart.
Posted by Carrie™ at 8:09 AM

2 hours and 58 minutes or about 180 miles...not sure if the following directions will fit in comments or not, but here goes!

Wow! Thanks for doing all of that. I'm going to print it off. We haven't been veg shopping for a while and I'm getting so low on everything, so it's time to head across the border. Once we get into NY, it shouldn't take too long really. If we drive the speed limit :o)

Gorgeous cabinet! I have IKEA envy. I finally live near one, but it's 2 hours away and I have no car. I can look forward to one being built in Portland in under 2 years I hear, though.