Shopping In The USA 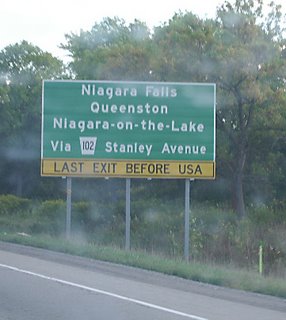 We hadn't been to the States in quite a while and were out of all our veggie stuff from the last trip, so it was time we hightailed it to the border.


We decided to go on a Thursday figuring that the stores wouldn't be too busy or the border crossing either.


We like to cross over at Queenston and head into Lewiston, NY. From there we hit Niagara Falls, NY, Buffalo and points in between.

It looks sort of busy in this picture, but our actual wait was maybe 10 minutes. The highways weren't busy either and we made excellent time. 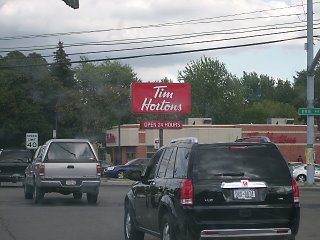 Good Lord! I took this in Tonawanda, NY.

This time we did some kick-ass shopping. I was able to get a jump start on my Christmas shopping - yahoo!! I can't tell you anything about that because if the people who I got presents for read this then it will spoil the surprise. Besides, wouldn't we rather just get right to the food?

Along with our usual stock up of Quorn products, Veat and Morningstar favorites, I got some Tofurky selections that I haven't seen in Canada yet. We're slowly getting more and more here, but we still don't have everything.

Below I've added some photos of items I got excited about. First off - Newman-O's! 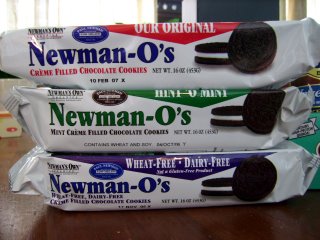 I've heard nothing but good things about these cookies. While we have some Paul Newman products available in Canada, I haven't seen the cookies. I got 3 different kinds to try. Now one of two things will happen. Next week they will be at the grocery store here, available to be had anytime OR these will be the best store-bought cookies I've ever had in my life and if I want more, I'll have to go to NY. I haven't tried them yet, but will give my verdict when I do. 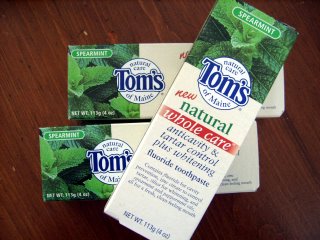 This was the deal of the century. We were in Target and on an end display I saw tubes of Tom's of Maine toothpaste on sale for $1.54. Around here, they're about $5-$6 a tube! So I got 3, and thought of Vicki and her toothpaste buying extravaganza. 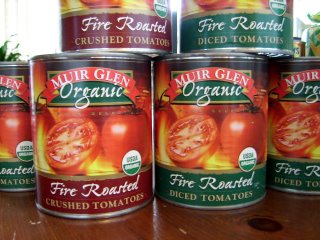 I hit the motherlode. Not only were there cans upon cans of Muir Glen Fire Roasted Tomatoes, THEY WERE ON SALE! Oh, I was dancing in the aisle. Jim ran and hid somewhere else so no one knew he was with me. Well, OK. Maybe I'm exaggerating, but I got these babies for $2.29 a can, which is awesome because I'm usually paying $3.59 - if I can find them. 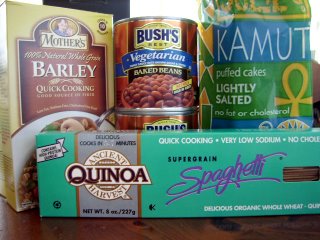 The barley is quick cooking which I've seen mentioned in recipes, but can never seem to find around here. Quinoa pasta is something new as are the Kamut puffed cakes. I thought they all sounded interesting so I'll give them a try. Bush's Beans I've had before and really like them. They remind me of canned beans I had as a kid but without the chunk of pork fat in it. The only vegetarian canned baked beans I've been able to find here are with tomato sauce which I don't like, or with maple, which is good, but not the same. I stocked up on beans this time. 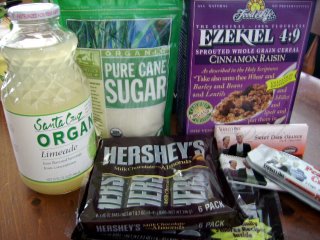 I liked the Santa Cruz Lemonade that I got on sale a while ago, that I wanted to try their Limeade. Also, go the sugar cheap, cheap, cheap. Just over $2. The cereal was another product that looked interesting, so I'll give it a go. Also picked up an assortment of Newman organic chocolate bars and our usual stockpile of Hershey bars. Yes, we have Hershey bars in Canada, but they are not the same. The American ones are much, much better.

We can't go shopping and not bring anything home for Simon. 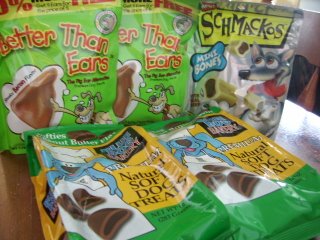 Better Than Ears were on sale! Simon goes crazy for those things. They contain no chicken products so there are no worries about his allergies. Same as Blue Dog Bakery. He's had peanut butter and molasses cookies before, but these are soft ones. Simon gets to try something new too!

Wow-wee, Carrie, you scored BIG time. I'm with you all the way on the food, toothpaste, special Simon treats, and special human treats --- aka wine!!! We also love quorn & veats. and you brought a little tear to my eye with the st. chapelle wine -- next time, just keep on driving.... and driving, straight to idaho and i'll take you to that winery. on sundays, we can take a picnic on their lawn and hear live jazz -- you'd love it, carrie. i guess part of me is surprised that canada doesn't have more veggie stuff -- canada seems soo veg friendly, and you have all the great vegan cookbook authors on your side. anyway, it looks like loads of fun to take a shopping road trip -- thanks for taking us along, i enjoyed it.

HAPPY THANKSGIVING! (looks like it'll be an awesome meal :o)

Funny how when you cross an invisible border, prices change. We live in the "tri-state area" (PA, NJ, Del) and we go to New Jersey to buy our liquor. We make any large purchases (electronics, etc) in Delaware because they don;t charge state tax.

Sadly, I don't think anyone comes to PA to buy anything!

I wish I was close to the border..I'd be doing the same thing as you, all the time ;)

WOW! That is quite a haul. I can't believe your selection isn't better in Ontario. I'm going to have to look for the Blue Dog Bakery soft treats - I haven't seen those before and I think my girl Charlotte would like them alot!

CARRIE!! Wow, girlfriend, i love all your stuff!!! If you think of anything else you need, let me know and i'll stuff it in my luggage when i visit Canada in a couple o'weeks... i'm sure i'll be bringing stuff for you anyway, but if there's a particular item you are thinkin' of... e-mail me! :o)

Can't believe Hershey bars from the USA are better than those by you...

Bush's beans are da bomb! I love those things!

I'm still using up my old Tom's stuff... the fennel toothpaste is so incredible. I wish that company hadn't been bought up by a big conglomerate. Yuck! I liked 'em so much better when they were "small-time." Oh well. Guess that's progress, or something resembling it.

Newman O's ARE a treat, if you like those kind of cookies, for sure. I'm not big on the filling-filled cookies like Oreos, etc., but Newman's are special. Of course, i love Paul Newman anyway. Such a cutie and with a huuuuge heart as well.

Hope you enjoyed your time in the USA. I can't wait to visit Canada for the first time ever. YAY!

Hi Carrie! I loved reading about your road trip! I'm glad you got so many great deals too - the food looks great!

I've never heard of Tim Horton's. I suppose I will see one soon though if they are taking over North America! lol! I used to live on the East Coast where there were Dunkin Donuts every few feet. Here in Seattle, they're tough to find! I bet Tim horton will be moving in! Lol!

Newman O's are really good! We just bought a package yesterday of the Wheat-free Dairy-free kind.

That toothpsate was SO cheap! I can't believe that! I just spend way too much on the same exact thing! Lol!

Anyhow, thanks for sharing your trip. Looks like you hit a few jackpots there!!

heyyy I have Limeaide at my house right now too. It's wonderful!!

I think you'll enjoy the Quinoa pasta! I do. I have passed that sign a number of times. And yes, Tim Horton's gotta love 'em! Tim died too young! What a nice way to remember him...hockey and donuts! ;)

Tonawanda was bumpin' this past weekend, eh!?

ohh..great idea. I've been talking to some friends about making a trip to the states for clothes shopping...now I know I'll have to hit the grocery stores too.

those are some GREAT buys Carrie...i love the Better than Ears. Kody gets Trader Joes Peanut Butter cookies.

newman o's are ALSO very good and i am a huge fan of Bush's veggie beans. well it's obvious to me you need ot move to Sacramento so you can shop with ease and stop hyperventilating in the aisles when you find fire-roasted tomatoes my dear...okay? okay.

Carrie, what a haul! Awesome score on the Tom's toothpaste. (And hooray for Target, both a Minnesota company and the best of the "big box" stores!) Now, hustle up and get in your kitchen and cook something with all of your great deals! (Can't wait to see the food posts!)

Carrie, we do the same thing when we go to the US. Everything is SO much cheaper and there is so much more variety. (We bought the exact same brand of sugar as you too).

I was disappointed by the Newman-Os. I too had heard great things.

I was supposed to go visit a friend in Lewiston today, but she and her kidlets are sick. Where do you shop when you go there?