Yea!! Look who I hung out with on Saturday. 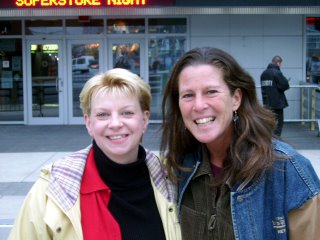 It's KleoPatra! On Saturday afternoon, Jim and I drove into Toronto and picked up Kleo who was in town for her nephew's wedding. OMG! She is sooooo nice and such fun. We had a great time bopping around the city.

When we first hooked up, she had a bag of goodies for me. In it was: 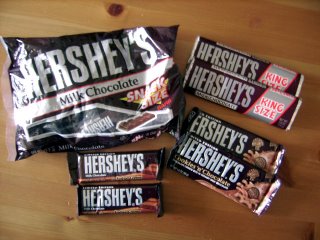 OK. How thoughtful is she? I friggin' love Hershey bars from the USA. Along with the regular plain Hershey's, Kleo brough some Cookies n' Chocolate and Fudge Creme Hershey bars. 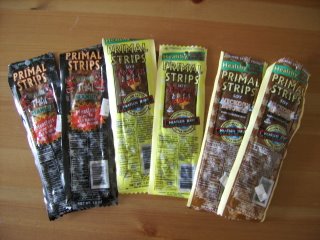 She also brought me some Primal Strips. I've heard about these before, but have never seen them in Canada, so this was also a big treat. Kleopatra says these are one of her favorite snacks. I think I'm going to tuck one into my lunch for tomorrow and give it a try.

We drove to downtown Toronto and parked in our usual spot near the ACC. It's a pretty good location because we were within walking distance to the things Kleo had mentioned that she wanted to check out.

First stop was the Air Canada Centre. There was a hockey game on Saturday night. Leafs vs. NY Rangers. We SHOULD have had tickets because Jim's partner has had a long time customer, Michael Nylander. Jim had asked Ron earlier in the year to ask if the Rangers were in town, could Michael get us some tickets. Michael said "Sure! No problem! Just remind me the day before." Well, Ron isn't a hockey fan in the least so he forgot and we never got tickets. I wish we could have taken Kleo to a game. Anyway, we got to go in and check out the lobby area and get a bit of a feel of what the place is like on game night.

Then we walked down by the CN Tower so she could have a look at it and Kleo also wanted to check out Rogers Centre AKA Skydome, although that is not it's official name any longer. It was all locked up, so we couldn't get in. But we were able to go into the hotel that's attached to it and sit in the little bar area which has a huge window that looks out onto the field. 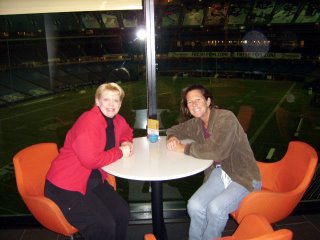 You can't see it in this photo, but they were set up for football. The Toronto Argonauts play here. That's CFL.

We then walked down to Yonge Street and past The Hockey Hall of Fame. They don't have very good hours and close at 6pm on Saturday, but at least we got to look at the building. :o) From there, we walked down Yonge Street to have a look at Lake Ontario. Sorry, no pictures. It was dark by this time.

Kleopatra also said she wanted to go on the subway. By this point we were getting kind of hungry and decided to go for something to eat. 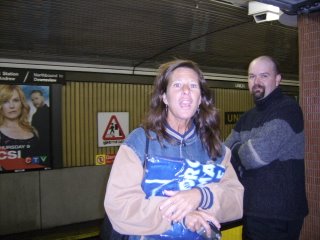 Here is Kleo and Jim waiting for the train at Union Station. 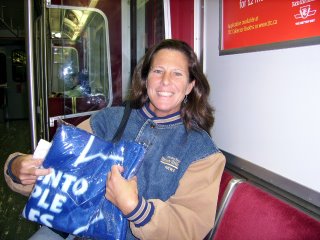 Here's Kleopatra Riding The Rocket. The blanket she's holding was a promo from the Air Canada Centre. She's going to take it home to her nephew, a hockey fan, who was babysitting Mattie.

We got off the subway, walked a few blocks and ended up at our restaurant destination. 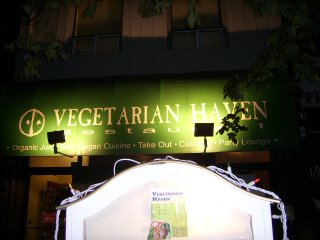 Stay tuned for "Dinner With Kleo"!

That is so exciting! Call me when you guys get to Virginia...hahaha :)

Oh that looks like so much fun! :) If you two would like to take a road trip down to the Boston area, you're more than welcome!

OH! That is so awesome! Love all the photos & I can't wait to hear about your meal @ Vegetarian Haven. I think meeting other bloggers is so very cool (I also got to meet Kleo) and it's great getting to know someone who shares a life philosophy -- you see eye-to-eye from the get go. You look like you're having a blast sitting in those spunky orange chairs. CHEERS!

Cool- I would love to meet fellow bloggers, or even have a whole blogger get-together...you guys look like you had fun.
And congrats on your new job!

Cool that you got to meet Kleo and congrats on the new job. Way cool.

I have a wine question for you...we're having a party on Sat night and I was wondering what would be a good white and red wine to offer our guests that would please most people.

Sweet Pea, e-mail me at scarycarrie_ca@yahoo.com with your e-mail address. I just have a few questions for you to help me help you better.

i had the BEST time with you, Carrie!!! Thank you for taking me around everywhere, and fpr spending so much time with me!

Thanx as well for posting these pix. What a grand trip down memory lane to see our fun night again.

i'm swamped at work and still not used to the time change - *YAWN* - here but i'll be posting soon...

It was FANTASTIC to spend time together, Carrie. REALLY loved every minute of it!

And the maple leaf creme cookies are spectactular. Almost as delish as the vegan chocolate chip spelt cookie you bought me! "Mr. Christie, you make a great cookie!"

Carrie, you are a great friend!

Oh wow ! So awesome to see both of you on the same blog !!! LOL
Can't wait to read about your dinner :))

And also, so cool about the B.Adams DVD ! Your father is so nice ! I haven't seen the Japan Show on DVD but I saw the Ireland one. He's still got it, doesn't he ? ;-)

How cute!! I laughed out loud because I didn't expect to see you AND Kleo together!! Lol! I love it!! It's really fun to see you girls hanging out together. You are both so sweet and bet you had the best time!

Those photos are so cute of you two. What a real treat for you to finally meet each other. It's sort of bizzare but I truly feel like I've made some wonderful friends (including you and Kleo) and hopefully I'll also get to meet you all one day also.

I'm finally around catching up on my favorite blogs. CONGRATS ON THE NEW JOB! And dinner with Kleo, how fantastic! You've certainly had an awesome time while I have been away slaving away. :) I saw your request and bread will be on the menu soon, I will be taching my foods class how to make big mall style pretzels this coming week.