When I was starting out exploring a vegetarian diet, I turned to the internet for a lot of information. I found some great sites and dropped in on chat rooms and joined some Yahoo groups to be able to talk with like-minded people and to gain knowledge from their experiences. One person I met early on and connected with was my friend, Chris. He lives in Scarborough, North Yorkshire, England. We've been internet friends for about 6 years now. We exchange e-mails, photos, Christmas cards, etc. In the late summer, he e-mailed to inform me that he had finalized plans for a 4 month multi-continent trip and Ontario was included in his plans and he wanted to meet up. He was staying in Toronto for a few days and wanted to go to Niagara Falls so I quickly volunteered to be his tour guide for the falls. He took the train from Toronto and Jim and I picked him up at the Burlington station. He booked a nice bed and breakfast nearby and stayed overnight. 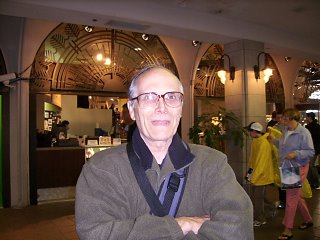 This is Chris. (in mid-sentence. Love to get "action shots". HA!) He's 67 and was raised vegetarian and has been vegan since his 30's. He even eats raw about 60%. He said he tried a raw diet to help alleviate some joint pain and muscle stress and he felt so good after such a short time, that he tries to stick to it as much as he can. 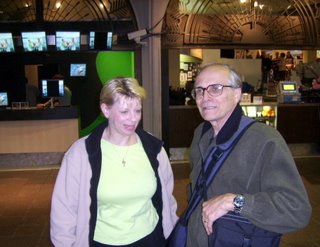 Here's another "action shot". This time I'm in mid-sentence. This was actually taken at Niagara Falls. Since Blogger is being difficult lately, I don't seem to be able to upload a lot of photos on one post, so here's just a couple of the falls. 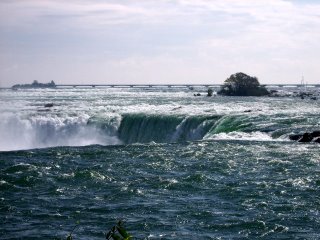 This one shows the Niagara River just as it's pouring over the edge. See the bridge in the background? That's United States. At one point, the two sides of the countries are so close, if it wasn't for the roar of the water, you could actually yell across and be heard. 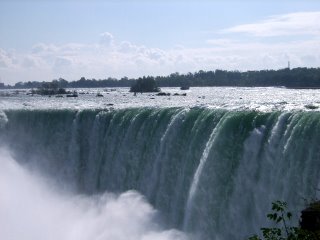 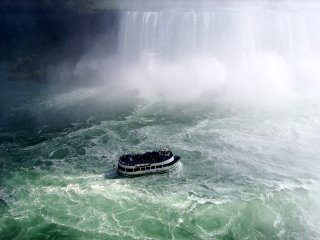 We had talked on the phone and were making plans of things we could do. When you live somewhere, you forget what a tourist might like to see. One thing Jim suggested was going on Maid of the Mist and Chris seemed really keen on it. Maid of the Mist is the name of the boat that will take you right up as close to the falls as possible. Jim was born in Toronto and has spent all of his life in Southern Ontario and I've lived here for 21 years and neither one of us has ever done this boat ride. Jade was the only one who had been on before. She was the seasoned veteran of our group that day. 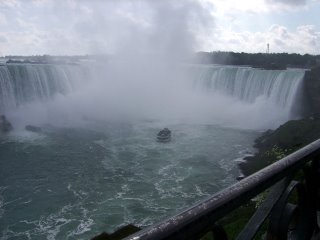 This is my favorite shot. You can really see how huge Niagara Falls is. This is the Canadian side called Horseshoe Falls. If you click on this link you can see a cool satellite image. 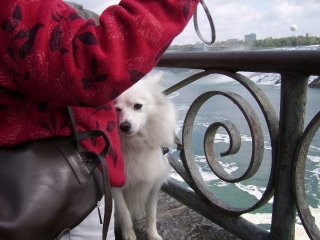 Niagara Falls isn't just for honeymooners. Dogs love to take in the sites too. This little guy was with his owner admiring the view. By his accented bark, I think he might have been from some borough of New York City. Brooklyn, the Bronx? I can't tell, but he seemed to be enjoying his vacation time. 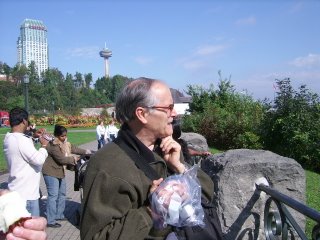 Now is Chris comtemplating the wonder of Mother Nature and how some things in this world are so amazing they just make us feel so utterly small? Or was he having second thoughts about this boat trip? 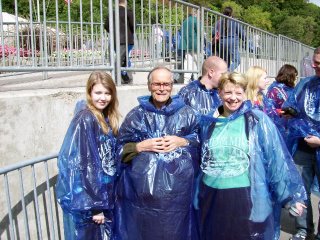 Here we are suited up in our provided rain gear and ready to go!

Carrie, this is such a GREAT post !
I love everything about it : being introduced to Chris (so inspirational !), seeing you, your honey and amazing Niagara Falls !
Wow ! Thank you for making me dream about a part of Canada I haven't seen yet :)

Great photos, especially the one of you in mid-speech. So cute!

Hopefully i'll have this stoopid cold licked by the time we meet. Totally psyched and stoked and all that good stuff about hanging out with you (and Simon and Jim and the other veg*s), Carrie! YAY!

Chris is really inspirational... it's amazing who you can meet from the internet. Not every story of meetings of folks from the computer ends up a horror story!

Hi Carrie
this is a great post. I always want to go to Niagra Falls. Just can't make it there yet. Well..I'll in one day.

woweee! those pics here and below are incredible! Funny how you are only now taking that boat ride into the Falls. Much like being from Newfoundland, I haven't done the whale watching tours, or even toured much of the province. We see some things as "tourist attractions" and don't do them - but I bet you had a blast on that boat!

How special that Chris has been a vegetarian/vegan his whole life. That's truly amazing. Imagine the changes he's seen in the availability of foods in stores and restaurants, and the acceptance of the diet. I remember not being able to buy soy milk of any kind in our grocery store, and now there are dozens of brands/flavors to choose from.

What a beautiful day, and you are such a lovely host and friend to bring Chris on that trip.

Great pictures- great action shots, great nature shots!
I was in Niagara falls 2 years ago, and stayed on the Canadian side and loved it.

I also loved seeing your great finds for groceries- always appreciate a chance to "peek" into other peoples' shopping carts. Let us know how they come out!

Last time I was there it was so crowded...

oh god. what a blast...i'd freak out though. not a water fan.

funny how you live someplace for so long and don't take advantage of your own tourist attractions...me too.

Chris does seem like a nice gentleman. does he have your blog? did you like his visit?

Lucky you to show Chris around and be able to meet! He looks like a sweetie. I loved how he was smiling at the falls. I bet you all had such a great time! Must be fun to meet a blogger friend!!

So cool that you could be a tour guide. The falls look spectacular. Why have I not gone? Why? Why?