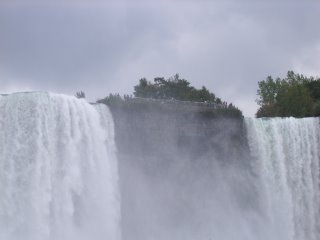 This photo was taken from the boat. It's a great shot of the American side of Niagara Falls. 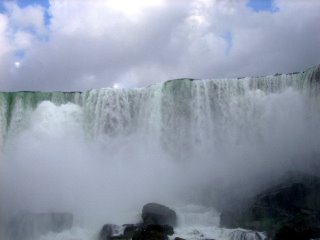 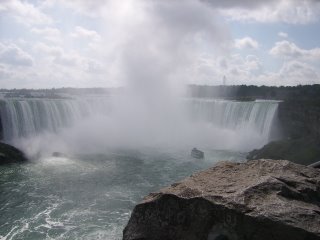 Remember, we're on this boat. 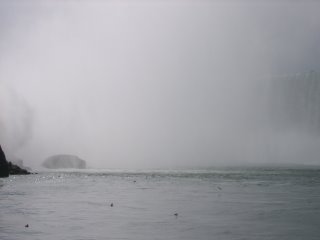 We got to a point where we were very close and there was nothing but mist. It was like being in a rain shower. I snapped this one quick and then put my camera away. I didn't want it to get wet and ruined. 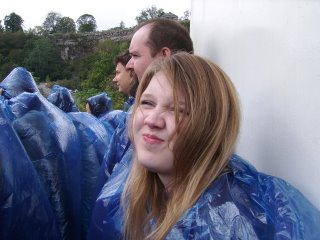 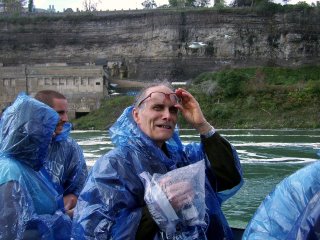 Chris couldn't see through his glasses. See how he's got his camera rigged up. He put his camera in a plastic bag, cut a very small hole where the lens goes and bought a special filter which he screwed on the outside of the bag. He kept his camera watertight and was still able to get photos close-up. When he sends me his shots, I'll have to post them. 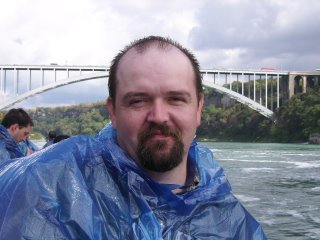 Here's my honey. He got wet too, but had a blast. 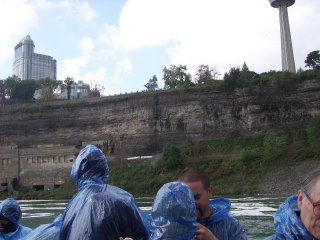 This is a shot from the boat up to where I was standing when I took pictures of the boat in the water. Hellloooo up there! 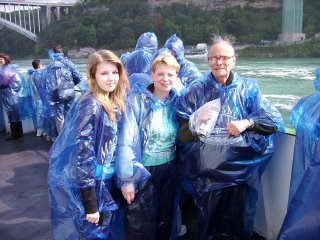 Here we are back at the dock safe and sound and a little damp. After, we cruised around Niagara Falls for a while, then headed to St. Catherine's to find a restaurant. We were all famished. Nothing seemed to open until 5pm on a Sunday. How odd. So we ended up back in Burlington and went to a great Indian restaurant called The Bombay Grill. Lots of veg*n selections. We were so hungry, I forgot to take a picture of my food. I got a sampler plate that was to die for. The waiter was so nice and we all left stuffed. I forgot to take pictures of the food, but remembered the bathroom.

So Chris has continued on his journey. He's been to Nova Scotia, Montreal, and is going to Vancouver, Chicago, Fort Worth, San Fransisco, Yukon, Oklahoma, Argentina, Austrailia, New Zealand and I can't remember where else. Have a safe trip Chris! Talk to you when you get back to England.

wow - what a great trip! It's so cool that you became such good friends. I hope you showed him some of the local wine!

Such great photos! I love the Maid in the Mists ones you posted above too. Your family is SO cute, and Chris seems to fit right in! I think you should adopt him! Lol!