Along with burgers, pizza is one of my favorite "junk" food meals. When I first read the recipe for "The Joint's Cheeseburger Pizza" from La Dolce Vegan I thought it sounded a little weird. Mustard & pickles on pizza? Melissa had made it and said it was really good, so I decided to give it a whirl. What a hit! That was months ago and I'm still making it and it's still a favorite for us. Although I've never blogged about it, this is a repeat meal at our house.

I make the crust from scratch using the recipe in La Dolce Vegan but I leave out the herbs for this pizza. 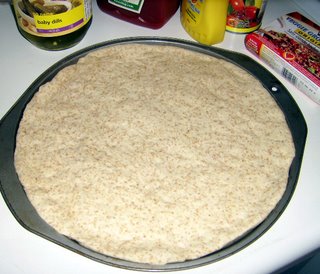 Jim likes white bread. I try to get him to eat a healthier alternative, but he won't. So I sneak things in where he won't notice. Like a whole wheat pizza crust. The recipe makes a lot, so I split it between two pans. 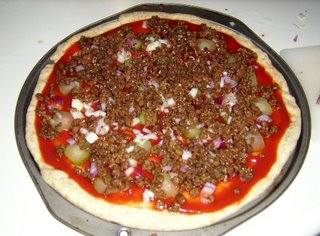 Here it is with some of the toppings. Disregard the onion bits all over the counter. I got sprinkle happy when I was putting this together. The recipe called for tomato sauce. I mixed some ketchup into the sauce to make it taste more burger-like.

Then topped with cheese and almost ready for the oven. I've used vegan cheese for this and it works quite well. This time I used real cheese - a mix of mozzarella and cheddar. 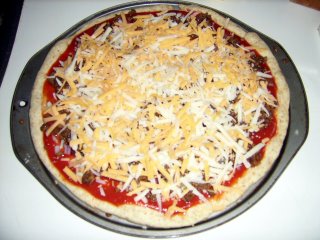 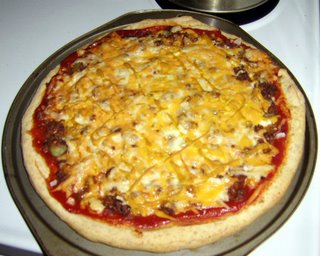 Voila! The finished product.
Every time I make this I forget how unbelievably good it is. It may take a bit of time to put together, but I get two pizzas out of it, so I wrap one for the freezer and on a night when I don't feel like cooking, I just throw it in the oven and dinner is served. In that respect, the little bit of extra time initially is well worth it.

And when you taste this....you'll see that it's definitely worth it!

hey thanks for stopping by my blog.. The cook book question is hard huh? I too go through phases but what makes it hard is cooking for the 4 and 5 year old tastes.. They are pretty adventurous I think but, they have limits.. I have loved every recipe from the venturesome vegetarian, complete vegan cookbook, and vegan world fusion. I haven't done much from vive yet but, I do look forward to doing more. The Kramer books I find pretty useful in a pinch as most of the recipes are quick, easy and can be produced from what’s in the pantry or fridge. I also have a big notebook from internet recipes.. I love http://allrecipes.com . The five star recipes usually can’t be beat! How about you which are your fav?

Love the pizza play by play.. we are huge pizza fans.. I have become quite fond of veganrella!

yummy - i love pizzza & homemade can't be beat. i need to pull la dolce & get crackin' on this, thanks for the idea. i think it's the best that you also have a pizza for later...

MMMMmmm cheese burger pizza, for some reason that sounds really appealing. I haven't made real pizza in a while... lost the paddle to my bread maker... I am pretty sure I accidentaly threw it in the garbage. sigh :-(

I can see why that would be good. I add mustard to my veggie burgers to give them a nice burger tang...

I had to turn down a non-vegan pizza at an office party today. this looks 10000x better.

Yummy - I've never tried a pizza like this, but I should. Well, actually, I shouldn't eat anymore pizza, but oh well.

wait. did you say mustard? where's teh mustard? can you post the recipe?? beucaes mumma love pizza....

I'll have to look this recipe up in La Dolce Vegan, it sounds interesting. I have never made pizza dough from scratch. I would love to use whole wheat flour. You found it was easy to do?

Have a great weekend Carrie!

Carrie, that looks SO good! Thanks for the play-by-play on that, too. I would totally dig and dig into that pizza! WOW!

I really want to make pizza but I'm finding it way too time consuming. How long did it take you to make the crust and have it all ready to top and pop in the oven?