I have a like-hate feeling for PETA. There is no denying they've raised awareness of animal rights and brought the plight of factory farms, inhumane treatment of circus animals, horrifying slaughter practices and much, much more to the forefront. Sometimes they use sex to sell their message as they've done with their latest fur campaign. Unveiled to coincide with the 2008 Olympics is this poster -

Amanda Beard, a swimmer on the US Olympic team, was to do the unveiling at an event that was to be held in a private room at a nearby hotel but for some reason, the hotel was locked down due to "security reasons." Instead, the event was held at the gates of the athlete's village. The event took place to not only help draw attention to the cruelty in the Chinese fur trade, but to inform & educate on the cruelty of the fur trade worldwide. Amanda did some press coverage, and it was all done in a positive way. Well done on this one PETA.

The next news story generated by PETA a couple of days later just sickened me.

This is all in reference to the horror story that struck the Canadian media with such force, people are still talking about it. On July 30, 2008, on a Greyhound bus travelling from Edmonton to Winnipeg, Tim McLean was sleeping in his seat when the passenger beside him stabbed him repeatedly and decapitated him. You can read here the report when the story first broke.

Then the Westboro Baptist Church (who's only members are the founder and members of his own family) and that nutty Shirley Phelps-Roper were coming to picket the funeral. They were going to carry signs that said "God Hates You" and "God Hates Canada".

As if Tim McLean's family and friends didn't have enough to deal with, PETA comes out with a new campaign, playing on this whole event. 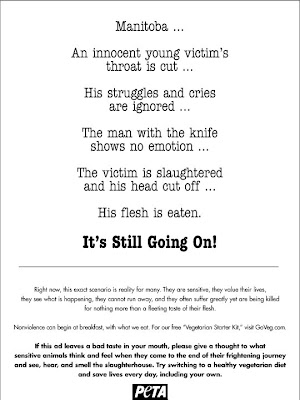 
It's things like this, or that terrible campaign about the Holocaust, that totally discredit PETA and has the general public thinking they're a bunch of radical kooks. It's such a shame that all of the good work they have done is overshadowed by this kind of shock media. They even tried to purchase space to run the ad in the Winnipeg Sun! Click here.

Would this campaign make anyone think twice about going veg? I certainly don't think so.

I agree that PETA uses some seriously bad tactics to deliver their message.

what the f... is peta thinking to me that is just plain gruesome!! ohhh ick.... that poor guy and his family..

I really want to support PETA but it is tactics like this that make me want to distance myself far far away from them. I appreciate all of their helpful work but I agree that it is unfortunately negated by stunts like this. I'd hate to give them money only to be sickened to learn it was going for this campaign.

i have a like/hate relationship with Peta too.

Agreed, Peta does go too far often and this was too far. On the other hand, they do much so much good for animals and many times it takes the shock value to get "the attention". However, I do not approve of what they did to this young mans family.

I was so disgusted when I heard about them using the Greyhound bus tradegy in their add. Isee what their saying...it's ahppens all the time and we condone it,....but this was for too insensitive, and certainly not going to get more vegetarians in the world.

PETA is the "Sting/Bono" of animal rights movements. They must be stopped...in their efforts to push for animal rights, they have almost forgotten about human rights and human respect.

that's absolutely horrifying that they would use that incident for an AD... I think I have a dislike/hate relationship with peta. :/

Ahh jeez...while I was away for the summer, I missed this story...kinda glad I did. I too was rah-rah for PETA in the beginning, but stunts like this simply paint all folks interested in animal rights with the same insane brush. It makes it harder for the little guy (like me) to reach out to folks.

I have to confess -- I am 100% behind the Amanda Beard poster campaign -- I think she's hot and sexy and glamorous. She can do all that without fake boobs or other people's fur... it works for me!

I hope we can see more fit, accomplished vegans in the series.

Not so much down with the text ad or other scare tactics. It is cruel and unfair, what happens to animals -- but most people don't think of animals as having rights or feelings and will dismiss such tactics out of hand.