First I heard last month that Mick Jagger turned 65! Now today, Robert Plant is 60. Time marches on, but our rock icons are still icons. Just not quite as smokin' hot as they used to be. 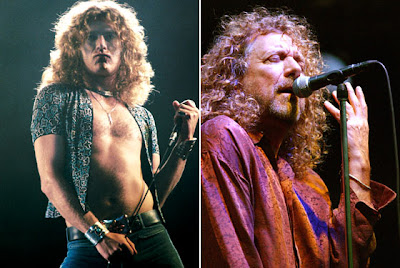 I can't really think of anyone around today that comes close to the doing what the super groups of the late 60's & 70's did. What a great time for music! There are some odd exceptions but for the most part I'm so sick of all the shiteous music on the radio. It all sounds the same. (barf!) Instead I mostly listen to the classic rock stations. Isn't is sad when the music of your generation is considered classic?

So...how about some good ol' rock? Here is one of my very favorite Led Zeppelin songs. Crank up your speakers & Enjoy!

I highly doubt he reads this blog, but just in case - Robert - Happy Birthday!

I think the only good response to this would be...

Do your best Jagger!

hahaha
you're 100% right, music has not been the same since the 60's and 70's but there are some amazing independent unsigned bands... the radio is crap! :)

i wish he read your blog... that would be SO cool. He was here in SD w/Allison Krause not long ago and they had great reviews of their work together. Who'da thunk?!

Thanks for stopping by my blog. i dunno what got into me... a brief respite from our SCRABBLE Beta (bring back SCRABULOUS!) at Facebook!? You're such a star, and i'm glad you are still posting here!

i'm *drooling* over the phyllo rolls below, just so you know.

And i know what you mean about PeTA... i feel the same exact way.

wooo-hoooo, Robert Plant sure was a hottie! I still love Led Zep's music.

wooo-hoooo, Robert Plant sure was a hottie! I still love Led Zep's music.

Maybe he is going to Google himself one day and find you, Carrie!

But, would you prefer a date with Plant or Adams? :p

I am still in love with Peter Frampton...even without his beautiful golden mane. Awwwhhh....