This is going to be a long one. Go get your drink before you start reading. At least this post will help you pass some time.
April was great! (except for Simon's troubles - see below) For starters, I had a birthday! Jim made me dinner which was a real treat, because he very rarely cooks. BBQ-ing doesn't count, because I do all the prep and he just watches things brown on the grill. So, rather than going out to a restaurant, I wanted him to put some effort into this. He can cook, he just choses not to. He planned the menu, did the shopping and while he was in the kitchen, I just relaxed and stayed out of his way.
I love any kind of baked pasta with a tomato sauce, so he did this big pan - 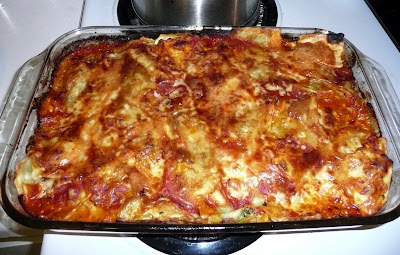 Mozzarella is the best when it's all melted and chewy & just lightly browned. Underneath all this.... 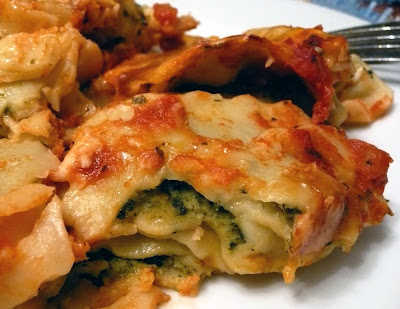 Spinach & Ricotta ravioli - one of my favorites. Jim used fresh pasta and it really does make all the difference. This was really tasty. 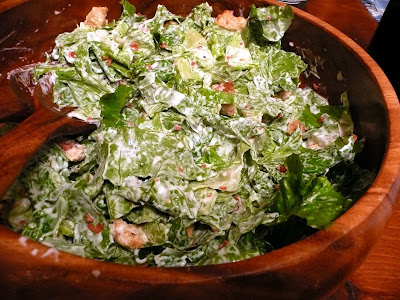 He also made a Caesar salad 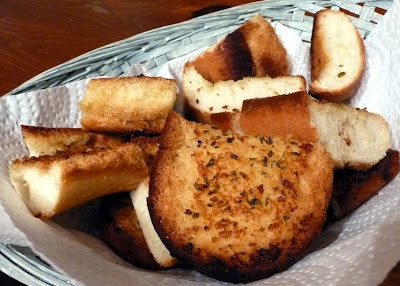 and toasted garlic bread, very garlicy and crispy on the outside, but soft inside. Mmmmm! 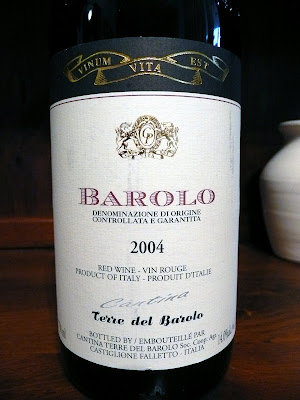 For our wine, we had this delicious Barolo which paired wonderfully with everything. Even though Jim can cook, he's not a baker, so he didn't even attempt to make any dessert. He opted for store bought, but what a great choice he made. 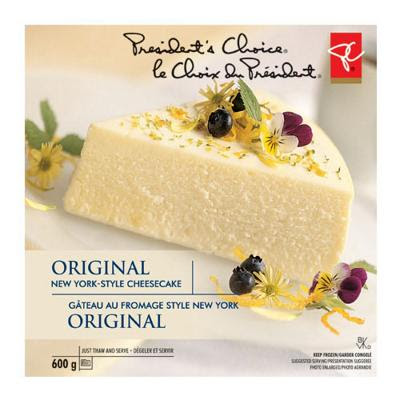 This cheesecake was so freakin' good! In all the years that it's been available, I've never had it. This has no crust & no topping and it doesn't need any. It's just pure richness. Since it was a special occasion, we cracked out one of our bottles of icewine. Even though Canadian wineries are producing a lot of world class, award winning table wines, they are best known for their delicious icewines. After harvest, select varieties are left on the vines, covered with nets so the birds don't eat the fruit. The nets also help to catch any bunches of grapes that may fall off the vine when the temperatures get to below freezing. The grapes are left outside to freeze solid. Once temps are consistently below -8C, and ideally -10 to -13, harvesting begins. Picking is done at night to ensure the grapes stay completely frozen. Pressing is most often done outside as well since to minimize any chance of the grapes thawing. Because the juice that is squeezed from frozen grapes is so concentrated, it's very, very sweet. But, it also means that very little juice can be squeezed out, so icewine is very expensive. If you have never tried Canadian icewine, do yourself a favour and taste some. It is a treat that you must experience!

The most common variety of grape used in icewine production is Vidal. It's a hybrid grape, and it works well for icewine because it has a thick skin that is less likely to split as the fruit freezes. Riesling is also used quite a lot. It's a bit more difficult to work with, but I much prefer the flavour of Riesling icewines. The high acidity in the Riesling grape gives the icewine a clean, sweet taste. A real treat is Cabernet Franc icewine. These are even more expensive, but worth it! The strawberry & honey aromas that come out of the glass are amazing and the flavour of strawberries & red berries and just a titch of spice made this a perfect compliment to the plain cheesecake. Who needs topping?!

Easter also happened a couple of days later, so that meant pub crawl! Janesse that I work with has a birthday at the end of March, so we used this pub crawl as an excuse to celebrate our birthdays. Hey, we're both Aries, so that means it's all about us. ;o) Janesse's mom was gracious enough to allow us to all meet up at her place, so we started with a BBQ and some drinks. 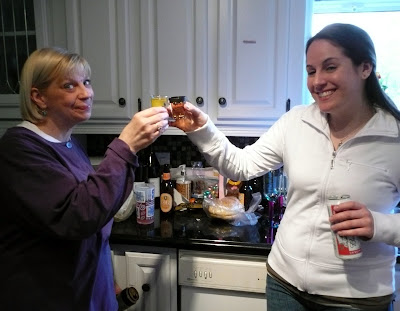 Birthday shots are a must. 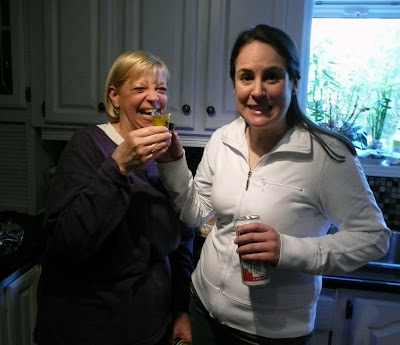 Come on Janesse! Don't be scared. You can do it!

I took some cupcakes 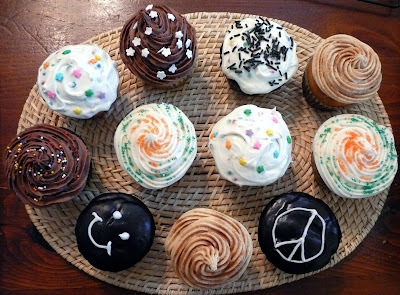 I made a variety to appeal to everyone and let's face it...it's more fun! 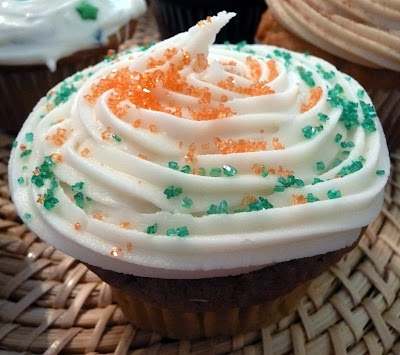 There was carrot with cream cheese frosting 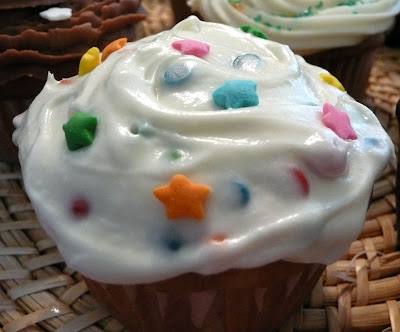 Rainbow Chip cake with Rainbow Chip icing. These are from a mix and a can. They are Janesse's favorites (go figure) so I had to include some of them, but I didn't make them with eggs like it said to do on the box - I used tofu. 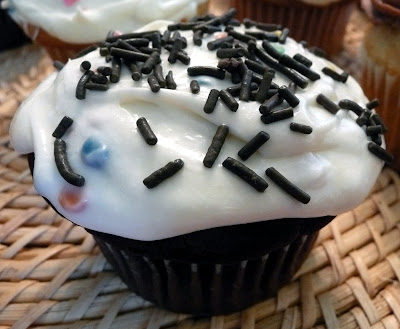 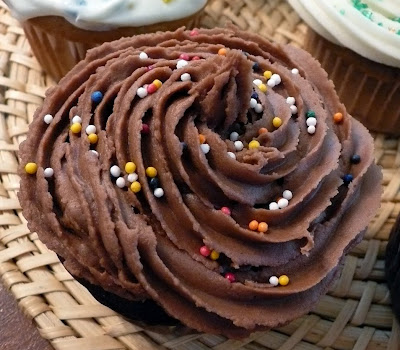 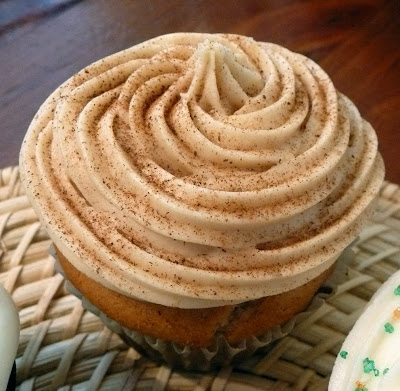 Peanut Butter with peanut butter icing. This is a recipe from my childhood and is a favorite of mine. 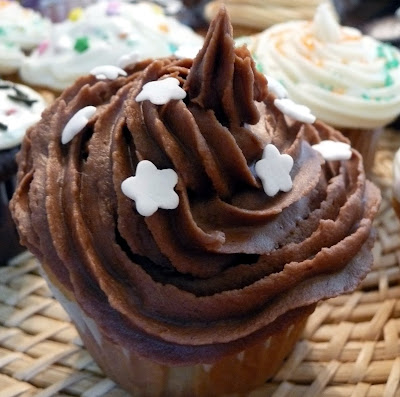 Then I did some Rainbow Chip cakes with chocolate buttercream 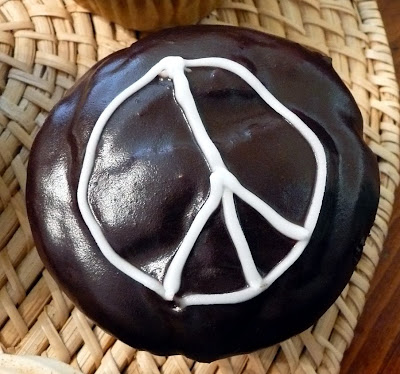 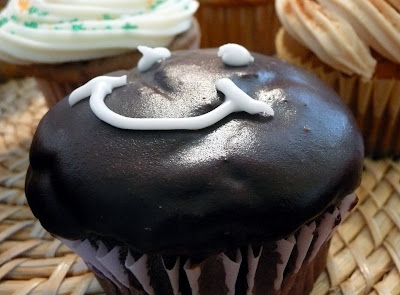 I used Isa's ganache recipe. Look how shiny these turned out. And such a deep, dark chocolate. Yum! All of these cupcakes, with the exception of rainbow bit are vegan! No one even knew. The leftovers were taken to work and everyone gobbled them up and raved about how moist & delicious they were. I didn't tell them they were eating TOFU! 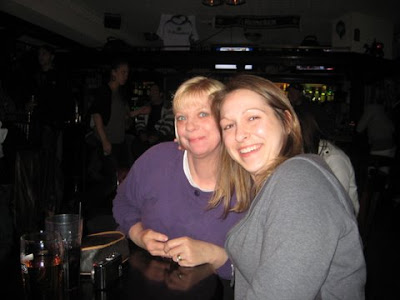 The best part of the whole weekend was that my friend Michelle was in town and came out pub crawling with us! She's been living in Calgary since February and it was great to see her.

On Easter Monday, the two of us hung out for a while and did one activity that we really enjoy....cruising around IKEA. This particular day happened to be my lucky day. We stopped at the "As Is" section to see if there were any deals to be had. I immediately zeroed in on a cabinet I've been wanting for quite some time. 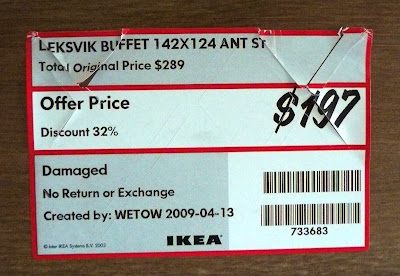 Hmmm....says damaged. We looked it over and found a scrape on the bottom drawer that if you didn't know it was there, would probably not even notice. There was also a nail that hadn't been driven in correctly and was sticking up, but a pair of pliers would take care of that nicely. For a savings of $92 AND it was already put together, I HAD to have it. Problem was...it had to be paid for and taken home the same day. Jim had the truck already loaded for work the next day, so I decided to leave it and come back in the morning and see if it was still there. If it was, I'd buy it, and Jim could pick it up in the evening. Michelle and I walked around, checking out the weird new stuff but mostly chatting and catching up. When we were leaving, I had to go look at the cabinet again. OMG!! There was some woman looking at it. She was touching it. She can't have it! It's MIIIINNE!! I couldn't leave this in fate's hands. I had to get it NOW! Michelle thought it might fit in the boxy-SUV type rental vehicle she had, so we measured the cabinet, went out, measured the vehicle...hmmmm....I don't know. It would be a really tight squeeze. Screw it! I bought it. It didn't fit. Luckily, IKEA has vans that can be rented for 2 hours. So we did that. $20 and us two superwomen managed to get it to my place. 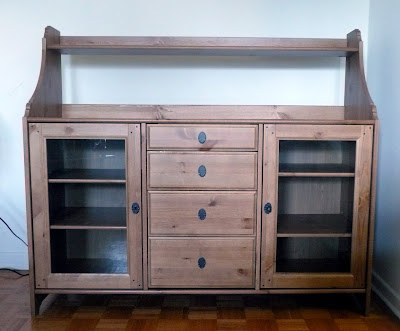 You like? I used Christmas money that we had gotten to buy this. I knew this was what I wanted and I finally got it. And no assembly required! The plan was to use it as a liquor cabinet and it works perfectly 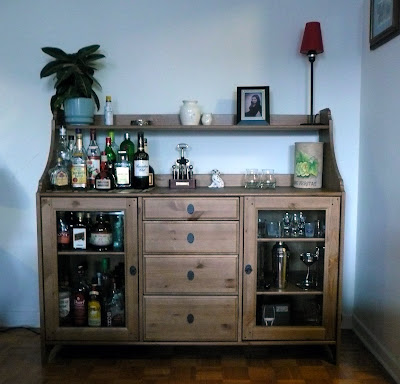 Thanks to Michelle and all her help otherwise, this wouldn't be gracing my living room right now. 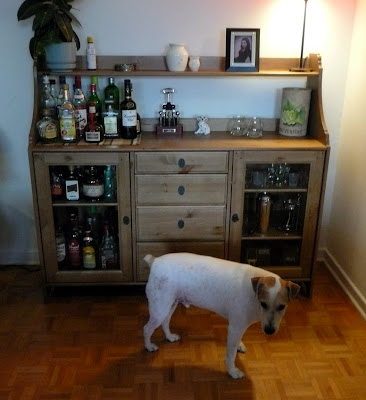 We did a very casual Easter dinner at Mama Rita's. Michelle was in town until the evening, so she joined us. 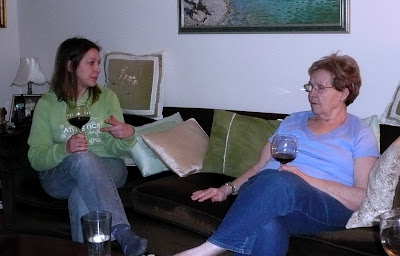 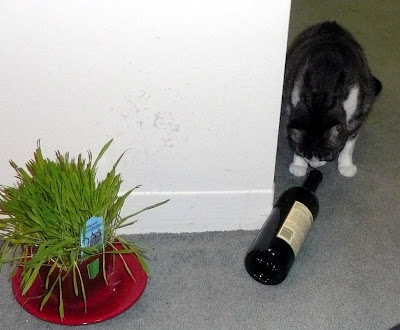 Fergus totally partied down with his cat grass and a bottle of wine.

A few days after Easter, Jim & I went into Hamilton to see the Broadway Touring production of Hairspray. I've never seen either movie, nor did I even know what the storyline was. Jim was a good sport and came with me, even though I warned him that I thought it was probably going to be "girly". 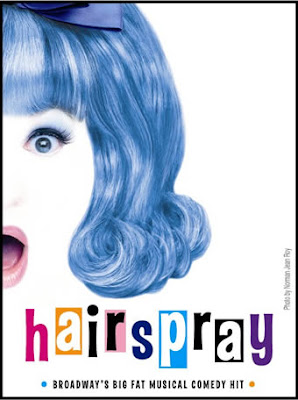 This show was FANTASTIC!! It was upbeat, bright, busy, the actors were great, the music & singing were amazing! We both really, really enjoyed this. If it comes to your town, go see it. You will not be disappointed.
A couple of days later, we were back in Hamilton, this time to Copps to see Celtic Thunder. 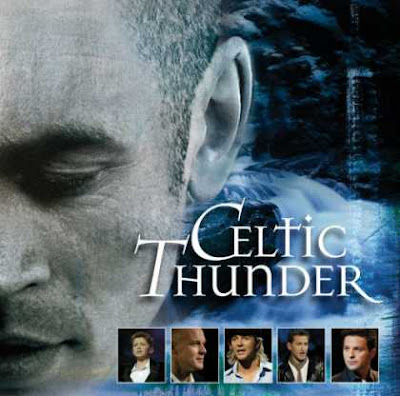 The show was very good, but Jim & I were kind of disappointed they didn't sing more of the traditional Celtic songs. The guys did provide an enormous amount of eye candy though. ;o)

Here's a video of Celtic Thunder singing one of my very favorite Celtic songs, Caledonia. There is an official channel on YouTube, with a clip of this song from the show, but embedding has been disabled, and this is the best I can find otherwise. If you click THIS, you will be re-directed to watch that video if you like.

Earth Day is now 3 weeks gone, but let me show you what I received that morning 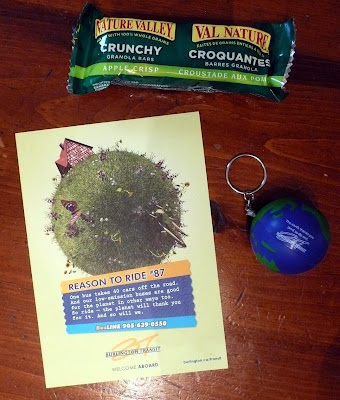 I was on the bus to work and when it stopped at the downtown terminal for transfers, a girl got on and handed out a granola bar, a key chain & a thank-you card to everyone. The card said I've reduced by carbon footprint by choosing to ride low emission, low sulphur fuel buses and that one bus takes 40 cars off the road. Too bad they couldn't get their act together when it comes to being on schedule and arriving on time so I don't miss my connection. 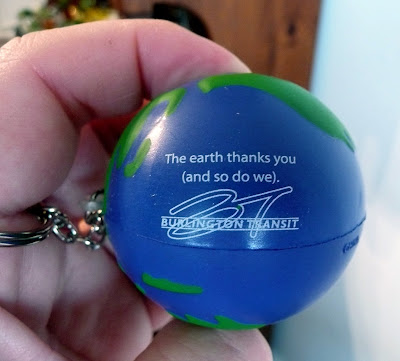 The planet earth keychain is kinda cute though.

I think this is the longest post I've written. Some days it's hard to squeeze in the time, so this one will make up for all the days I started, but didn't get finished. I've been creeping your blogs, but don't leave messages often these days. I'm hoping that will change. I hope you all have a great week! Up next....I'll show you what I bought when we went shopping in the States.

That Earth Day freebie is pretty cool! I'm a big mass transit rider myself, but never thought that one bus could take 40 cars off the road!

Wow--where to begin? First, happy belated b'day. Looks like you were well fed and are well loved. Jim really cooked up a storm for you. And those cupcakes look magnifique. I want the one with the smiley face!

Omniman and I always stop in the as-is section at Ikea. We've also found some real treasures. Vive le bargain!

Glad Simon is feeling better...better keep him away from Fergus. He looks like a bad influence.

I'd love your PB cupcake recipe!!