Summer is the busiest time for us workwise, but Jim & I had a rare day off together, so I wanted to have a nice dinner for just the two of us. I hadn't made this for quite a while so I dug out the recipe and got started. It's from Eat, Shrink & Be Merry and it's basically Tofu Parmigiana. Slices of tofu are dipped into a savory bread crumb mixture, baked, then baked again in pasta sauce & are smothered with cheese. I like to serve this on a bed of pasta. Tonight we had whole wheat fettuccine and I tossed some sauteed vegetables into the sauce. 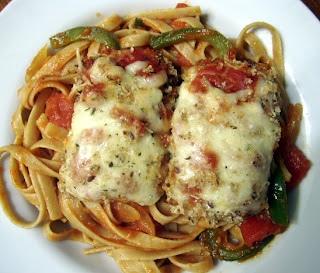 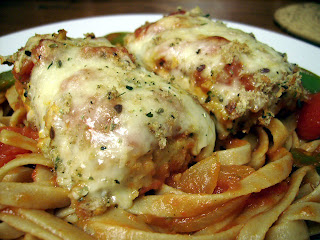 This dish has never failed me and I've made it at least half a dozen times. There is a bit of prep involved, but it is really simple to put together and the baking time all totalled is 1/2 an hour.
We also had a lovely garden salad with Sweet Red Wine Vinaigrette from La Dolce Vegan. Mmmm! So yummy!
. 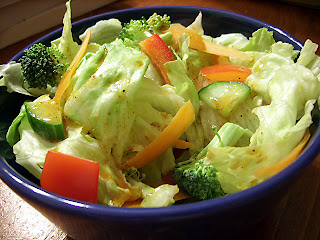 For our wine selection of the evening, I chose this - 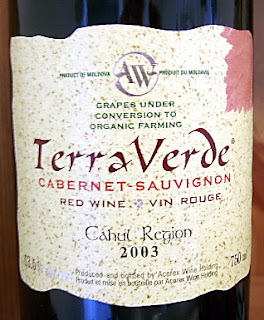 I bought this a long time ago and kind of forgot about it. I got it for two reasons - the vineyard is under conversion to be organic and the wine comes from Moldova. I've never had wine from Moldova, so I was curious to give it a try. I remember it wasn't very pricey either, so if it was crappy, then I wouldn't be out a lot of money. What a surprise! This was a really good wine! It was flavourful & smooth - very delicious.
***Just a side note here....strangely enough, after we had this, the new bi-weekly Vintages catalogue arrived at the store and when I was looking through it, the 2004 vintage of this wine was due to be released Sept. 1. The 2004 offering is fully organic & a great value at $10.95. There's no tasting notes in the blurb written, but our Product Consultant, Terry, said he'd tried it and it was a pretty good wine. So, if you're in Ontario, (or anywhere else) pick up a bottle.

I'd gotten a sweet deal on a basket of peaches & wanted to use them in a dessert dish of some kind. 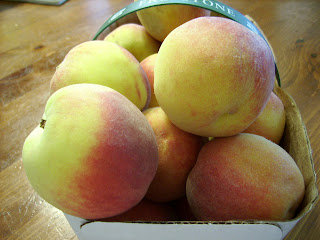 I ended up making Peach Crisp from this recipe. 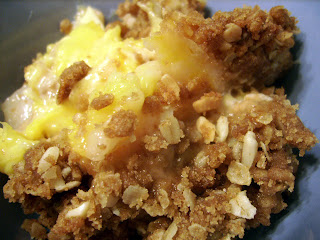 It tasted delicious, but I wasn't keen on the amount of flour added in with the fruit. But I figured Martha Stewart knew what she was doing. I know the flour was to keep the bottom of the crisp from becoming a soup, but the filling ended up being kind of thick & a bit glue-like. Hmmmm.....I think next time I will just add a couple of tablespoons. 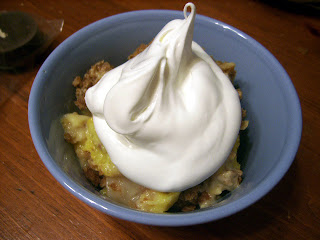 I don't know how ANYONE can defend Michael Vick.. and I am disgusted by Whoopi Goldberg for doing so... and disgusted that it has been made into a race thing. It is SOO NOT A RACE THING... it is a bunch of inhumane, idiots torturing dogs for their own amusement and profit... back woods white hicks or inner city gangbangers.. I don't care.. it is an equal opportunity horrific crime.

-thanks for letting me vent.

Love those peaches - and the peach crisp! Yum!! As for the dog locked in the car and the dogfighting - well, it's on par with a lot of abuse cases that come up. 'Gee, Occifer, ya mean I'm not supposed to beat my wife/husband/kids/grandmother?' Hard to believe. Surely if the law is unknown to some of these people (again, hard to believe), common decency should be. Or so I used to think *sigh*.
Hugs!

I'm in love with fresh peaches. I just made a batch of jam with peaches straight from the farm.

Wow, that pasta dinner looks fabulous! Awesome job on that and that crisp.

I can't believe Whoopi tried to come up with an excuse for Vick. There is NO excuse for what he did.

I'm drooling over that tofu.

And those animal abuse stories make me sick. Also human abuse. Today, I heard about a woman who left her infant in the car in teh sweltering heat for 8 hours, I mean, seriously,. What is wrong with people?

WTF is wrong with people! I don't get Whoopie's logic at all. Female genital mutilation is still common and accepted in Somalia, does that make it OK? Rediculous.

On a lighter note, your food looks so good! I've made seitan parm, but never tried tofu. Peach cobbler is one of my all time fav desserts.

Ooooh, your peaches are making me drool!

Ugh. Michael Vick is not even worth talking about. Every time I think of those poor, abused dogs, I want to scream and cry.

mmm, your pasta dish looks so delicious & a good bottle enhances everything! Vick knew it was wrong. Now, he'll pay the price. I just hope it's stern enough to deter others. Public outrage helps. btw: I <3 peaches!!

if i don't lay eyes on kody for 15 minutes, i question it. i can't imagine leaving my dog in the car and forgettig about him. my GOD! i panic if i let him come and it's 75 out!

vick will suffer. whoopi wasn't defending vick she was just saying she understood his ignorance becuase i guess that's what they do in the south?

the south wasn't too happy about her comment, however...

Your tofu parm looks so good, it could be on the cover of a book. And dontcha just love the Podleski sisters? I love their books and recipes.

Sounds like a great day off. I love the wine recommendations! Keep them coming. Hey, you would be proud of me. I tried a new wine based on the label and it was really good!

so I've recently discovered red wine.. lol- what can I say? I'm not much of a drinker. I'm definitely enjoying your wine bits :)!

hey I'm trying the Martha S. recipe tonight for a dessert. Those peaches look too tempting, thanks for the inspiration!

Awesome pasta, by the way. It makes me want to make that for dinner tonight!

As for the Michael Vick thing... I grew up in Chesapeake, VA. 20 minutes from Newport News where he grew up. Uh... wtf. I have never once seen anyone dog fighting.

Eat, Shrink and be Merry! What a cute title! The tofu dish from that book looks so good!

Also, I love your display pic!!! It's new to me, since I'm online so infrequently. It's so pretty!

Ugh - the poor dogs we're reading about. I am disgusted with how people can mistreat them. :( :(

Hey long time no see!
The tofu parmesan looks great! I made Chris "chik'n parm" a few weeks ago with Boca patties and soy cheese.. he loved it!
I'm also liking the peach crisp.. maybe I will make that soon!