We decided it would be easiest to take the GO Train into Toronto for the game because there is a stop right at BMO Field.
.

Before we got to the station, it started raining and we got caught in a gigantic downpour running from the parking lot into the station to get our tickets. Jim & I were both soaked. I could have taken my pants off and wrung them out and probably gotten over a cup of water out of them. My shoes and socks were swimming and were squishy even after we got home. I wasn't going to let the bad weather put a damper on our day because I had been looking forward to it for weeks. Once we got onto the train and got past Oakville, the sun came out and it stayed nice for the rest of the day. Figures. There were a lot of Toronto FC fans on the train & there were some hard core fans sitting near us, so we got talking and it got us even more pumped for the night ahead.
Once we hit our stop at the exhibiton grounds, we showed our soccer tickets and got free admission to the CNE. Since we had a couple of hours to kill, we decided to walk around and check things out. We were greeted by a little Oom-pah band. 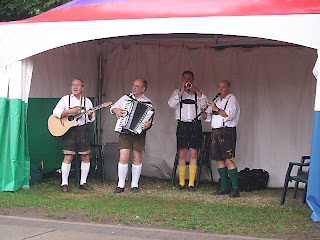 There were a lot of people milling around. 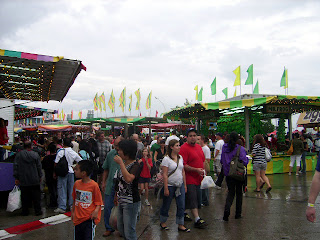 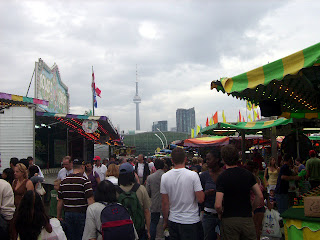 We checked out some of the games, vendors & exhibits. One that was particularly interesting was a look at the CNE from years past. We were getting a little hungry, so we headed to the food building. Our first stop?

Had to get me a beavertail! Beavertails are a delicious Canadian treat. It's a piece of fried dough, shaped like a beaver's tail that is served warm, usually with cinnamon & sugar or maple. You can get all kinds of funky, weird toppings now like Reese's Pieces or cream cheese frosting, but I like mine plain & simple. 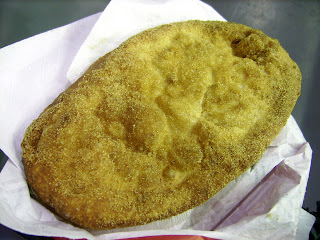 Jim & I both got cinnamon sugar. Mmmmmm! These are so freakin' delicious. They are not greasy or heavy at all. When made properly, they are light, crispy and heavenly.

We wanted to get into the stadium early so off we went. 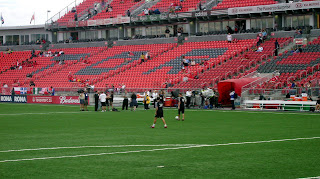 When we got in, some of the players from DC United were practicing on the field. We walked around for a bit and found our seats then watched the teams as they came out to do a warm up. We had a great view. We sat in the lower section, row 9, just right of midfield. 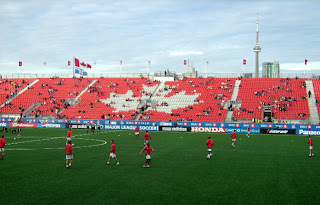 At this point the stands were pretty empty. 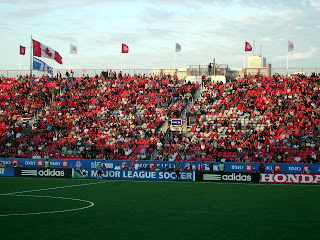 Now it's getting better. By the time the game was underway, the place was packed with loud, rowdy fans. It made for a very electric atmosphere. 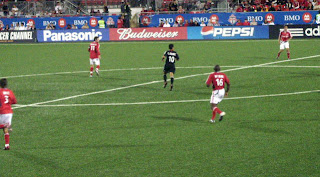 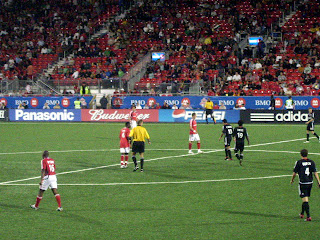 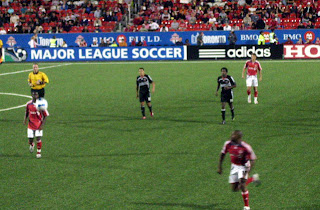 Final score - DC United 1, Toronto FC 0. Didn't matter, we had a blast. We're now hoping to get to another game. There are only 4 home games left and the tickets are sold out, but there's always Ebay!
Posted by Carrie™ at 1:40 PM

Looks like a fun game! I've always wanted to go to a professional soccer game. Heck, I'd go just for one of those beavertails!

Beavertail is such a fun name! Professional soccer and tennis are the only sports I really enjoy watching and I'm sad to say I've never seen either one live. Your day sounds really fun.

I hate to say it...but those Beavertails look so good. Then again, I LOVE funnelcake. Fried dough and sugar..yeah!

I won't show omniman this post. He'd be sooo jealous of the soccer game.

Now I'm obsessed- I want to try a beavertail! That's the cutest name for a pastry ever.

Beaver Tails are amazing. We have a membership at the Toronto zoo and I like to time our outings with the opening of the beaver tail shop. I love mine with cinnamon and lemon. Hubby likes the chocolate hazlenut topping.

Oh Beavertails, it's been a long time since I had one of those. Is there one called Killaloe Sunset, or something like that? Or did I just make that up? (The one I liked was sugar, cinnamon and lemon). Mmm...so good.