I haven't really been posting a lot lately. Seems like a lot of bloggers are super busy right now. I've been working an insane amount of hours this past week. I started my new job at the LCBO and this past Thursday worked my last shift at the wine store. I was sorry to leave, but onto bigger and better things! In between, I've been working my shitty day job that I detest, but have to keep because the LCBO is only part-time. The sooner I can wean myself away from there, the better. It will be a happy day when I give my notice. Might take a couple of years, but it will be so worth the wait.

Since I've not been home much this week, I did practically no cooking. I do have food pictures to post though.

I've been seeing a naturopath for a while for an assortment of things mainly my psoriasis, allergies and general lack of energy. My ND (naturopathic doctor) is Carissa Doherty and I love her! She is uber cool and so easy to talk to. Treatments that I've received so far are slowly shifting things in my body and I can notice slight changes. Even though she's given me some pretty disgusting tinctures to drink and kooky things to do like wearing cold wet socks to bed, we're working at making me better. Last month, for 2 weeks I was on an anti-inflammatory diet to help give my digestive system a chance to relax a little and not work so hard and to do a bit of a cleanse. I was not to eat any eggs, dairy, wheat (!), sugar, salt (sea salt OK), caffeine, alcohol, chocolate (!), or processed or preserved foods of any kind, so packaged things were out. Since I eat a vegetarian diet, I didn't find it too difficult really. I missed my coffee in the morning and with my insane sweet tooth and a major chocolate addiction, I thought I would be in the throes of agony, but it really wasn't that bad. I had to have only fresh fruit juices, but they had to be diluted which made them kinda bland. And I wasn't supposed to drink water with my meals which I found rather difficult. But I managed and I didn't die for lack of bread.

I planned some interesting dishes and thanks to my cookbook collection, I was able to make some tasty meals. Dreena's books were amazingly helpful and so were Sarah Kramer's.

For breakfasts, I usually had Nature's Path Millet Rice cereal with some rice milk. One day I made oatmeal with cinnamon, raisins and maple syrup. 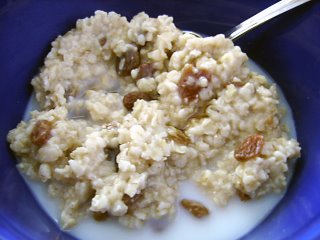 I'm funny with oatmeal. I like it well enough, but can only eat a small amount before I start to find it too much. I OD'd on the raisins in this particular batch and picked most of them out. The cinnamon and maple syrup were wonderful though.

I was able to find some tasty breads that were wheat free. One that I like in particular, that I will continue to buy is Stonemill Organic Spelt Bread. Another one was ShaSha Organic Spelt Bread that was yeast free, so it was more dense, but really delicious. 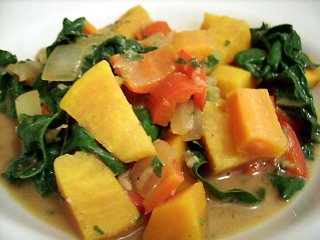 This is now on my list of delicious-nutritious meals to make again. Spicy Thai Stew from The Everyday Vegan. 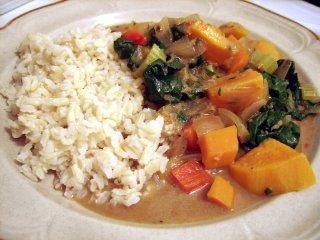 I served it up with some brown rice one night and the next night had it with some leftover quinoa. Not only does this stew taste great, it calls for almond butter which gives it a bit of a protein punch, but it has lots of swiss chard in it. Great way to get those bitter green leafys that I don't eat enough of.

I was really missing some pasta. This next dish I concocted myself is certainly nothing fancy. Since I was not allowed wheat, I used brown rice pasta. 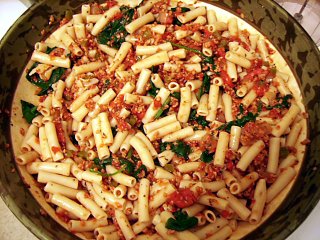 I cleared it with the naturopath that organic canned tomatoes would be OK so I used them for the sauce. I added some onions, garlic, some herbs, TVP to make it "meaty" and to get some protein and some spinach for more leafy greens. 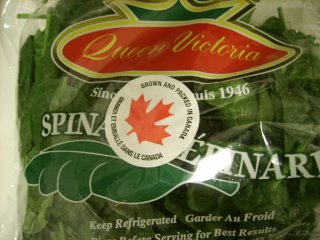 Boy, was this package hard to find. I guess after the e-coli incident there's not much spinach to be had and what is around it getting bought up fast. 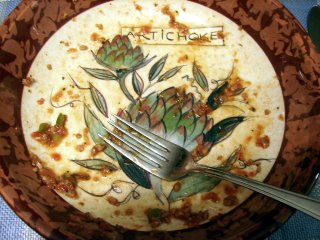 This is Jim's bowl after dinner. I guess it was an acceptable meal. 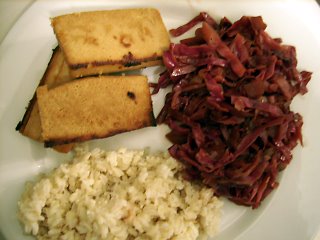 I also ate a lot of tofu because it's quick and versatile. Here I made some with the teryaki marinade recipe from La Dolce Vegan, but I eliminated the sugar and gave an extra squirt of maple syrup. Brown rice again. Since I wasn't allowed soy sauce (salt) or most tamari (wheat) I poured on the Bragg's to liven it up a bit. Also on my plate is some Sweet n' Sour Red Cabbage, also from La Dolce Vegan. Again, I eliminated the sugar and used a bit of agave syrup but it was still a bit too tart. I think made following the recipe it would be a bit better. It was still tasty enough and I had a big pile of it. 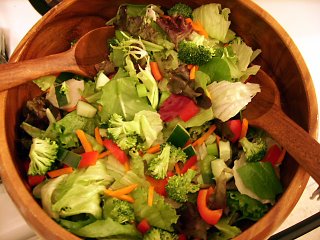 Here's a salad I made one night. Nothing too enthralling, but what made it fantastic was "Wolffie's Balsamic Vinegar Dressing" also from La Dolce Vegan. OMG! That dressing is so friggin' good, I could probably drink it. And it was nothing to make. Measure 8 ingredients and shake 'em up. That's it! I took a big salad to work one day and everyone kept saying "That smells so good!" Make it! You won't be disappointed.

So, just because I was on this "cleansing diet" didn't mean that I had to give up on sweets. I wasn't to have chocolate which was a bummer, so I opted instead for maple! Dreena had an interesting sounding recipe in Vive Le Vegan for Maple Walnut Cookies. I used the spelt flour option to keep them wheat free and elimintated the sugar. It only called for 2 tbsp. so I didn't think it would be a big deal. 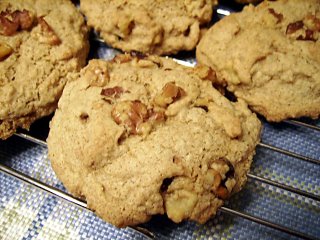 The first couple of cookies I gorged myself on after they came out of the oven were fabulously delicious! The next day they were still tasty, but a little dry. Very unlike Dreena's cookies which are usually so moist and chewy. I'm thinking that that little bit of added sugar helped to make them a bit chewier. They did hit the spot and were very flavourful so I want to make them again following the recipe properly. I did make the "Easy Pleasin' Oat Bars" which were easy and pleasin' and nice and soft & chewy like I expect from Dreena's cookies. I added some chopped up dates and it made them quite yum. I forgot to take a picture of those, sorry!

So a big thank you to Dreena & Sarah for making those two weeks much more liveable than they would have been otherwise.

Carrie, you should ckeck out Ben's blog - interesting diet information for sufferers of Psoriasis. http://adecadentconspiracy.blogspot.com/ He's a follower of the Pagano diet.

Looks like your few weeks of anti-inflammatory diet was pretty successful. If I had to eat only the foods you cooked up I'd probably be pretty happy!

I hope things get better for you really quick.

BTW, have I ever mentioned how cute your little girl photo is?

Oh.. my.. goodness. This is the bset entry EVER! How do you do that?

My oatmeal never looks that good! And I am so glad I finally got TEV.. I have to try that stew now.

My meal plan is running out and I have some pasta, but nothing to make a sauce out of! Oh yaea.. and I've made those cookies before. I didn't do the wheat free version but if I do recall they are a little dry.

Geez Carie, looks like you are doing well on holding back. I just found out my triglyceride level is slightly elevated again this year. I thought I had made the necessary dietary changes in the last year, btu I was wrong.

Carrie, those a beautiful pictures of wonderful food !

I was also going to tell you about Ben. :)

Carrie, I'm really interested in the idea of anti-inflammatory diets, so thank you for your informative post. (Inflamation is the root of so many problems, isn't it?) The food you had to eat looks so good, I believe you when you say it wasn't hard to stick to. I've never had brown rice pasta- but I've had spelt pasta and loved it. Beautiful pictures. I hope everything continues to go well with you, and the dietary changes have a good effect.

oh you go girl.. Your destiny is in your hands and you have definitely embraced the change!!! bravo! I wish you much luck on your "diet", change in eating habits whatever you want to call it.. it looks to me like you have embraced it full throttled and you are not denying yourself.. taste and flavor.. I hope all your ailments just melt away! Good luck. And again bravo.

Yes, see Ben's blog - he's on a diet to treat his psoriasis. I had to go gluten free back in March and I've been enjoying trying different pastas and breads and cereals (I love the Nature's Path cereals!)

Sorry to hear about your psoriasis, but it sounds like you got on top of it real fast. Your cooking is exemplary! I really should try to wean myself off of sugar b/c I know how inflammatory it is. Thank goodness for maple and agave nectar.

Thank you for such an informative post! I've been thinking about psoriasis and anti-inflamatory diets since I read Ben's blog (which Vivacious Vegan pointed out to you.) I'm happy that you already ate so well so that this "diet" wasn't a shock to you. The food look excellent to me, and I don't see much deprivation at all! Keep up the great work!

I had a ton of oatmeal today, like a gallon.

Sounds like you ador your naturopath....I wish i had that relationship with my Dr. Gotta find one I love..I just keep procrastinating!

That stew looks so vibrant!

well? how do you feel?

cold wet socks? umm...i'll have to check that one out.