Since we're so busy at the wine store during December, it's almost impossible to have a staff Christmas party, so we have Christmas in July. My boss, Bill, manages two stores and we always do joint functions. Jackie, who works at my store, and her husband, Paul offered their backyard and their services at hosts. It's always a potluck with the store supplying the wine and some of the food. I prefer potlucks because then I can always be sure I'll have at least one thing to eat. Last year there was a roasted pig which was the most disgusting thing I've ever seen. I don't even want to get into that one again. Even the omnis didn't like it that much. This year was just cold cuts, buns and lots & lots of fruit. Everyone did a great job with their dishes and I was able to fill up pretty good. I made Black Beans and Rice Salad from Moosewood Restaurant Cooks At Home. This is a great summer salad with a nicely spiced orange dressing. 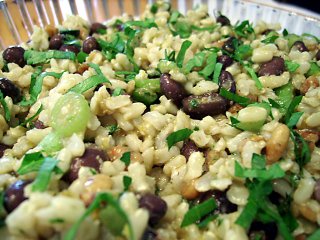 I didn't come home with much left. Probably just enough to have as a side for part of another meal. Everyone was saying how different it was and how tasty. I was about to win everyone over in a big way with the cupcakes. 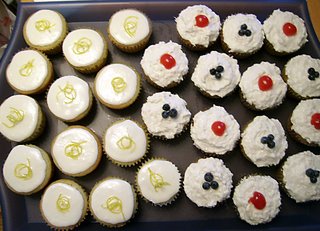 This is the tray I took. I wasn't sure how many people were going to be there from the Stoney Creek store, but when I figured all the Burlington store staff with their spouses I thought 2 dozen should be enough. Then I threw on 2 more for good measure. 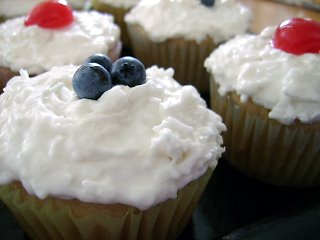 These are Coconut Heaven Cupcakes from Vegan with a Vengeance and let me tell you, they are like heaven. I ate two of them while I was still at home getting ready. I would love these for my birthday 'cake'. They are to die for! 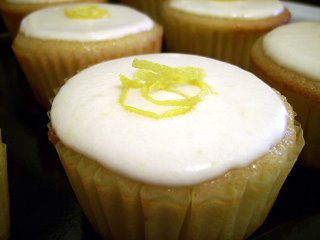 Here are the Lemon Gem cupcakes all finished. More people ooooed and ahhhhed over these ones than the coconut ones. A lot of the women asked for the recipe and when I said they were vegan, stunned faces looked back at me. "But they're so good!" one person said. Ahh, yea. I don't like eating crap, so I try to make tasty food. After all the trouble I initially had with these babies, it was nice to see they were such a hit. I came home with about 5 coconut cupcakes and 1 lemon.


We played a really fun game too. Bill had downloaded a bunch of theme songs from 80's TV shows and we had to guess what they were. For prizes of course. Jim & I did pretty good and ended up winning 3 times. I won a ladies Colio golf shirt and a GIANT bottle of BBQ sauce. Jim won 2 bottles of wine. One of the great things about working at the wine store - all functions include wine and wine is always a prize of some sort. Here I am looking all goofy drawing the next winner. 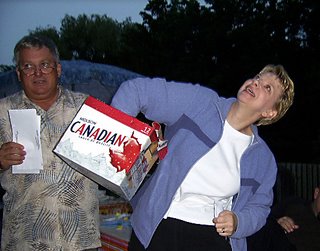 And Melinda won! Yea Mel! She was the one who trained me when I started working there. And guess what she won? 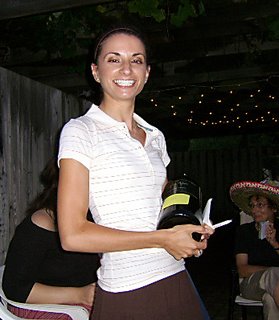 A 3 litre bottle of Cabernet Franc Reserve! It sells for $70 at the store. Way to go Melinda!

I'll finish off with a picture of some of the staff parading around the pool in ridiculous hats. (I think pretty much everyone was tipsy by this point). The craziest hat was worn by Lorin but you can't really see it too well. It was getting dark by this point. It looked like a Christmas tree, complete with tinsel, silver balls and a star on top. She made it herself and that earned her top prize. 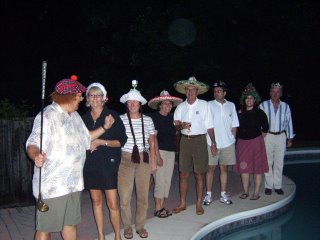 We had a really great time; stayed until midnight, then packed it in. Merry Christmas to all and to all a good night!

me love wine too you know...

Carrie! Your cupcakes are beautiful! I want one so bad. I could just reach into the moniter and eat one!

You sure had a great time eh? I like wine too lol! You are becoming a great cook by the looks of it. Keep posting those pictures.

looks like so much fun. those cupcakes look heavenly. I'm a sucker for anything lemon and/or coconut.

What a party!!! The hats are so kooky. The one worn by the woman in the black shirt and pinkish/red skirt looks certifiably craaaaaaazy. I love it! I never wear hats (i look dorky in all but a baseball cap) but i love them.

I love what you told the woman about not wanting to eat crap. GO YOU!

The cupcakes REALLY are beautiful. The coconut ones with the blueberries on top are my faves, in case you were wondering. Ha ha!

Sorry you had trouble with the lemon ones at first but see? Try, try again and you will (and did!) succeed. Girl, do those all look scrumptious.

Glad to see you have so much fun!

The party games sound like fun - great ideas! I love wine and would enjoy getting it as a gift.

I chuckled when the ladies were shocked something was vegan...it's like it's some devil concept at times. While planning recipes for an upcoming camping trip, my father-in-law said "no vegan stuff". I almost replied "so, no fruit, chips or alcohol right?" but I kept my mouth shut as I knew he was slightly kidding.

How cool that you work at a wine store. There is a winery near us that has a foot stomping weekend in August. For three weekends for a cost you can get all you can drink wine, the ability to stomp on grapes, and a t-shirt that shoes purple footprints along with other fun things. It has a waiting list to be able to get in though. We are on the waiting list.

this looks like soo much fun, carrie! love the hats...but not as much as that try full of cupcakes! i've made those coconut heaven cupcakes & they are stupendous.

that would have been one great party. Your cupcakes look great too.

I love Christmas in JULY!!! What a great idea. Those cupcakes are beautiful! What a reaction- "they're vegan??!!? but they are so good!!" lol- NO, vegan food is good... duh! I made a note in my VwaV book about the lemon gem cupcakes to let the batter sit- thanks for telling us...