Once again, there has been a long time between posts. Sorry about that (again). Time just seems to go by so fast lately. I have been busy with among other things - 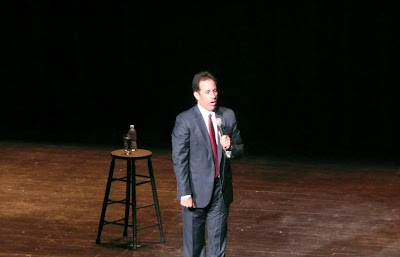 going to see Jerry Seinfeld perform his live stand-up act. Totally hilarious!! We laughed for an hour and a half. He makes the silliest observations & verbalizes it so well. I still rank "Seinfeld" among my top 5 TV shows of all time. Sometimes, that show is my life.

My biggest event, BY FAR, was the Roger Waters concert. 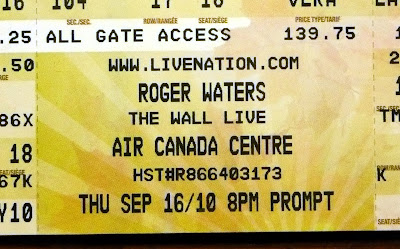 Can you believe it's been 30 years since "The Wall"? (one of my all time favourite albums). I loved the songs, I loved the story, I loved the movie....and when I heard Roger Waters was doing an anniversary tour, opening in Toronto, there was no doubt in my mind that I would be there. 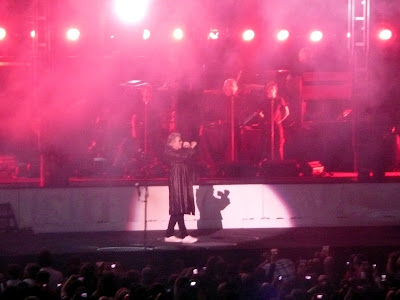 What a FABULOUS show! Roger was in terrific form. 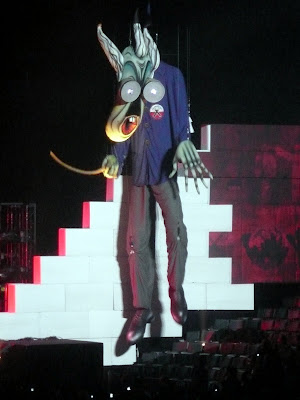 He brought along the inflatables, wall projections, special effects, pyrotechnics, the pig - EVERYTHING! (except David Gilmour - boooo!!) 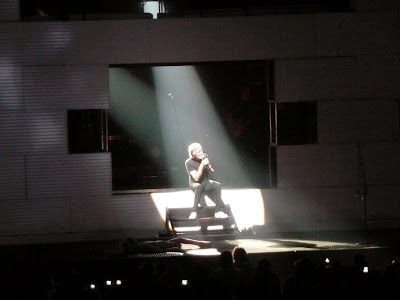 The experience was mind blowing. Roger's voice was great. During the first half of the show, the wall was constructed brick by brick across the front of the stage. 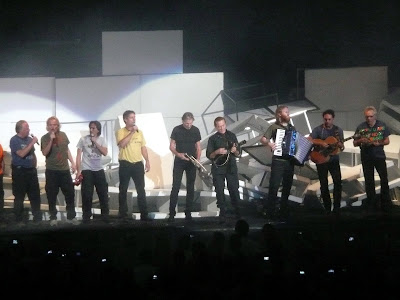 And at the end, they tore it down. It was wild! Best concert I've ever been to.
Anyhoo, as exciting as all of that was for me, probably not as exciting for you, so let's move onto a bit of food, shall we?

I really like the Podleski sisters cookbooks (Looney Spoons, Crazy Plates, Eat Shrink & Be Merry) They are quirky cookbooks filled with lower fat/calorie recipes - a bit of healthier cooking, shall we say. They are NOT vegetarian, although they do have some recipes with tofu & a meatless chapter. A lot of the other recipes can be modified to be meatless. Anyway, one that is vegetarian is Mexican Lasagna.
(Sorry the photo is a little orangey. I didn't have the proper lighting setting on my camera.) 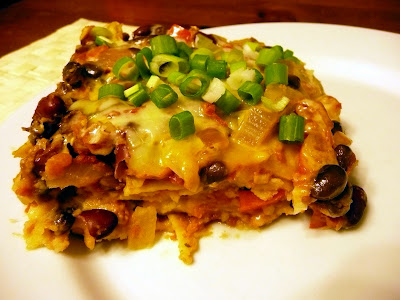 This uses corn tortillas instead of noodles and lots of beans and veggies. It was really, really tasty! It did make a big pan and we had it for a couple of meals and I put the leftovers in the freezer. Not a good idea. It was all soggy and fell apart when defrosted. So I'll have to halve the recipe next time.
I had a bunch of dill that was starting to wilt and needed to make something so I could use it up. I found one on the Campbell's soup site. It was supposed to be with chicken, so I just used PC World's Best Meatless Chicken Breasts. 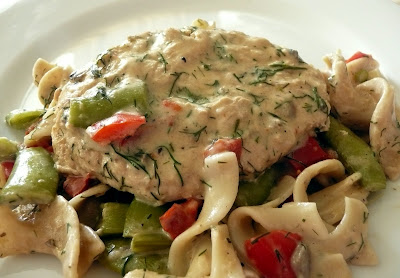 I also got to use up some sugar snap peas I had in the fridge. Combined with red pepper, cream of mushroom soup (recipe said cream of chicken, but I used mushroom) and some noodles, this was quite good. If you'd like to make it, the recipe is here.

Jim is not a big fan of cauliflower but, I found a dish that has won him over to the cauliflower side - 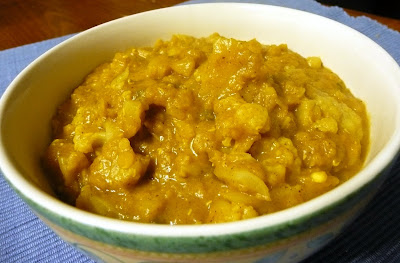 Red Lentil Cauliflower Curry from Veganomicon! He even had 2 servings of this. We had it with some basmati rice and Naan bread. It was sooo good. I took some leftovers for my lunch the next day and it heats up well in the microwave. 2 thumbs up on everything! (if I had an extra thumb, it would be 3 up for Roger)
Posted by Carrie™ at 2:42 PM

I don't care how expensive those Roger Waters Tickets will be. I will absolutely be in GM place when he comes to NY .

How cool that you got to go see Roger Waters!My husband and I saw Pink Floyd's last tour in the states, years ago, and it was phenomenal!!!

I want some of that lasagna!

That cauliflower dish looks delicious. I think I may have made it before but I can't be sure. Guess I'll just have to make it again and find out!

oh my god you are so lucky you saw roger waters! great post!