First of all, let me show you what I saw outside when I left work the other day. 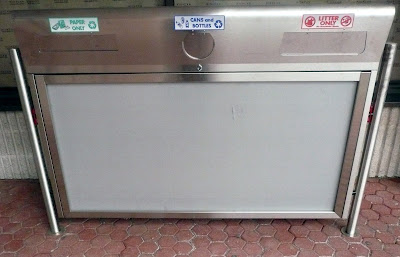 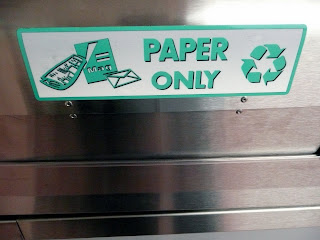 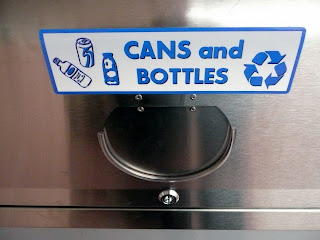 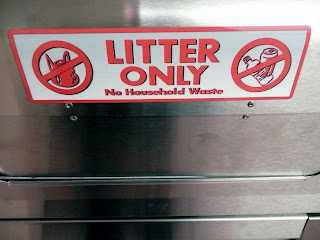 And one for "other stuff".
Nice, eh? I just hope that people will follow the labels and not just be lazy and throw their garbage wherever.

Anyhow, onto the asparagus. It never seems to last very long, so we eat lots of Ontario grown asparagus as soon as it hits the stores. I usually like to roast it in the oven, but since we bought a new bbq grilling basket, we did some on the barbeque. 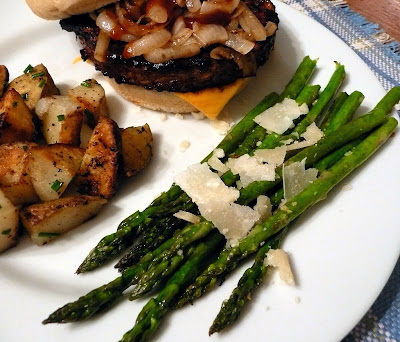 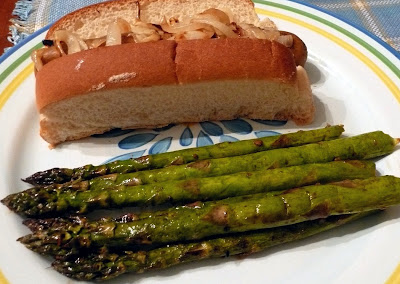 A simpler meal done on a weeknight - Tofurky Kielbasa sausages, asparagus with Goo; then when they came off the grill, I tossed them with some balsamic vinegar. That was really good! 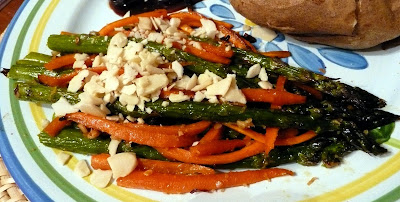 I popped over to Vegan YumYum and found a killer recipe for asparagus. 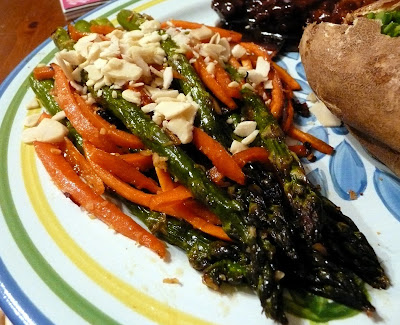 Chili Almond Asparagus - this is the best! The recipe called for 2 tsp. of red pepper flakes, but I scaled that back to have less heat. Baby mouth, remember? This is so, so delicious! It's fast to whip together and livens up any plate. I highly recommend this. You can find the recipe and Lauren's much nicer photos here.

Several times a year, and I'm sorry I don't know how many, maybe 8 or 9, the LCBO puts out a magazine called Food & Drink. It's complimentary since the cost of advertising covers the cost of producing the magazine. It is available at all LCBO stores and is printed in English and French. It's a terrific magazine and many of the recipes are outstanding. There was one I came across 3 years ago and I make it every spring when asparagus is in season. The recipe calls for penne, but I found this at IKEA and wanted to add some fun to dinner. 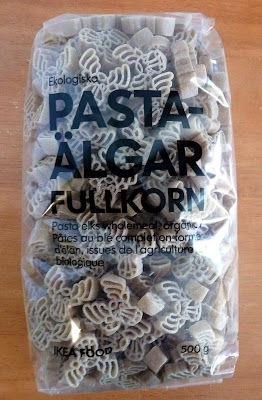 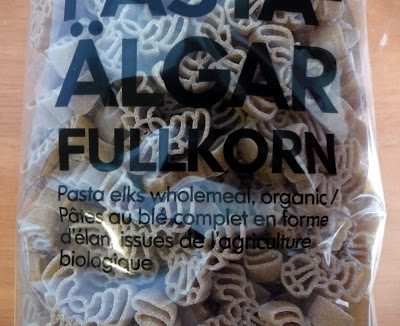 They are also wholemeal and organic! 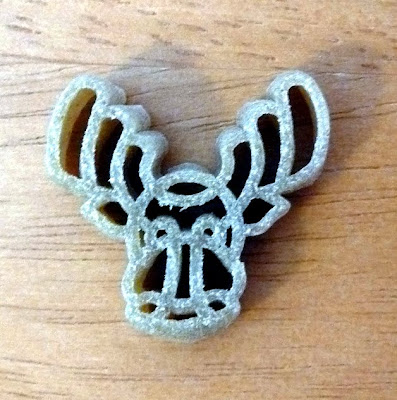 This is an uncooked one. Cute, eh? 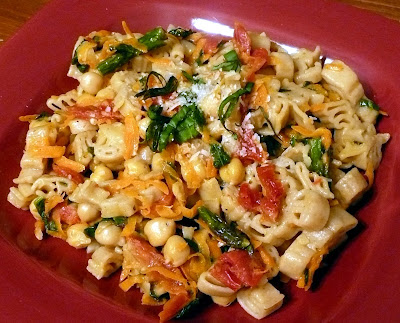 Here's the finished product. This dish is amazingly good. It's got chick peas, carrots, sun-dried tomatoes, asparagus, basil, onions, garlic, spinach....sounds delicious, doesn't it? Want the recipe? You can find it here. 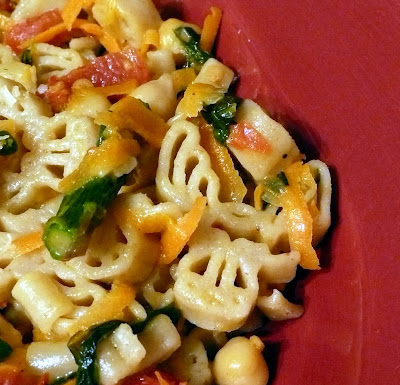 The elks held up really well. Almost all of them remained intact and cooked to perfection. 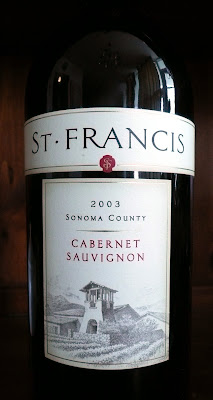 For our wine, I pulled out this. It might seem like a bit of overkill on a light pasta dish, but this particular dish has so much going on, that I thought it could pull it off. 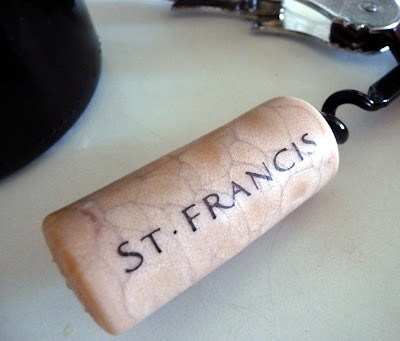 When I pulled out the cork, I was kinda bummed to see a synthetic one. St. Francis is one of the better wineries in Sonoma so I thought they would have used a real cork. A screwcap is an even better option. This wine was still very good. I would definitely recommend it and I would definitely buy it again.

I still had one more bunch of asparagus to use up, so back to Vegan YumYum I went for this dish. 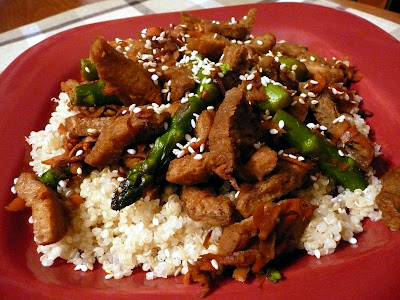 Sesame Soy Curls with Asparagus and Quinoa. I've never seen soy curls but from the descriptions I've read, they sound very similar to a product I've been using for years called So Soya. So Soya comes in small pieces like TVP or in chunks. I re-hydrated the chunks and cut them into strips so it would closer resemble soy curls. This dish is another winner! 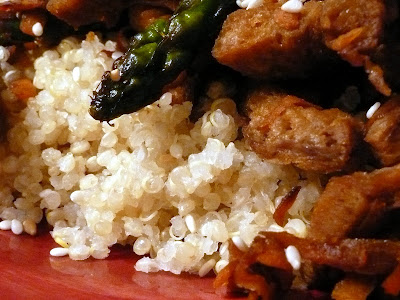 The quinoa provided a great base for the other ingredients. I should really cook it more often. We both like it and it's a nutrition powerhouse. If you'd like to try this out for yourself, the recipe is here. 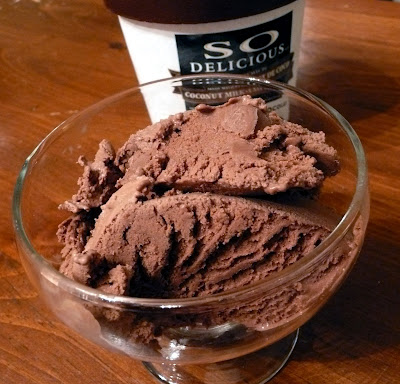 We then had ice cream! I've been dying to try this new coconut milk version from So Delicious. In the US, it's called Purely Decadent. We have Purely Decadent frozen dessert, but the coconut version is called So Delicious. *shrugs* Don't know why. Anyway, I opted for the chocolate flavour and it tasted to me like chocolate/coconut. It was very nice. I didn't tell Jim what it was, so he thought he was getting regular chocolate ice cream. He did notice a difference in the flavour and asked me what it was. He did like it and ate his whole dish. 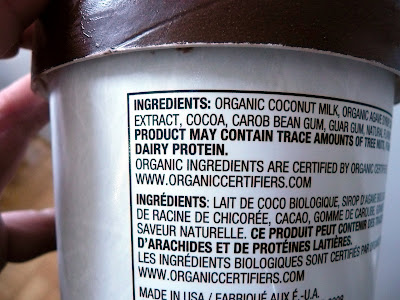 Since I still eat dairy, this isn't an issue for me, but the container said the product may contain trace amounts of dairy protein. Is this only on the Canadian product? I know a lot of vegans are snapping this up, so I'm wondering if we just resign ourselves to the fact that one cannot be wholly vegan in this world and just do the best one can? If trace amounts of dairy protein are in the frozen dessert one eats, it it OK to buy other products that may contain traces of dairy or egg? Where does one draw the line? I'd love to hear your thoughts.
Posted by Carrie™ at 2:34 PM

It is asparagus season and yours looks so tasty! How cute is that moose pasta.

I can't wait to try the Vegan YumYum's asparagus dish. Glad to hear it rocked!

I'm also thinking of trying that pasta. Thanks for the link.

Btw: Chili's has great margaritas! Glad you discovered them.

ha ha I thought the pasta was a moose too.. way cute.

On the trace amount- my daughter is allergic to dairy so we have to watch it.. i tried some bread once thinking the milk powder was far enough down on the list of ingredients but, she reacted so we have to watch our labels with her. but, I like you am not vegan just a vegetarian but, to only make one meal we cook a lot of vegan stuff.

I missed the early summer issue of Food and Drink. I'm so bummed about that. The recipes are great, I get so excited when the new issues come out. I once bought a bottle of kirch for a black forest cake that I never ended up baking!!

yes...you do the best you can. period.

i love bbq'd ANY vegetable. especially when its soaked in OO and balsamic vinegar...yum!

I like your close up of the pasta face. Hehe.

The pasta dish is an old fave of ours. We make it a lot during the summer.