I'm playing catch-up with holiday posts, but as I travel around to other blogs, I see that quite a few of us are a bit behind.

New Year's Eve has never been very exciting to me. A lot of hype and quite often a big letdown. In my younger days, I'd go to clubs & bars to party it up, but it was too crowded, too expensive & the night never lived up to the expectation. Now, I like to either go to a house party with some friends, or stay at home. This year, we did the latter.

Mama Rita had hernia surgery the day of the 31rst, so Jim & his sister spent most of the day at the the hospital. The surgery was a success & Mama Rita is doing just fine. I had to work. It's fun being in the booze business, but the down-side is working mega-hours during holidays. We were both a bit tired and just planned on staying home to either throw in a movie or just watch Dick Clark's New Year's Rockin' Eve.

I decided to make "The Joint's Cheeseburger Pizza" from La Dolce Vegan. I started with the dough and what better way to knead it than with my new mixer! 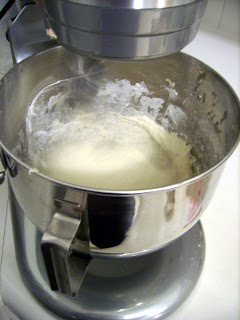 Here it is in action as everything started coming together into a nice ball. After it was left to rise, punched down and made into a pizza crust, I added the toppings. 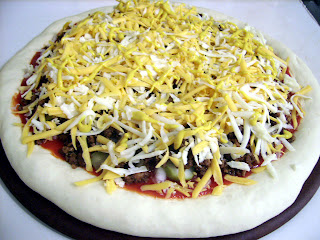 I think I piled on too much for the toppings, but hey, it was the last day of the year. Go out with a bang I say! 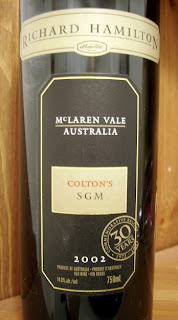 While the pizza was baking, we opened is Richard Hamilton wine. I bought 3 bottles last year around Christmas time. We had one then and saved the other 2. I thought it would go great with "cheeseburger", so we dug this baby out and cracked it open. It has improved greatly over the past year. It's smoothed right out. I think I'll save the last bottle until the end of the year and it should be amazing by that point. 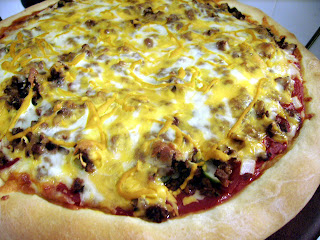 Ding! Pizza's done! It looked and smelled so good. I couldn't wait to eat. I hadn't made this for a long time & we both thought it was a perfect dish for New Year's Eve. 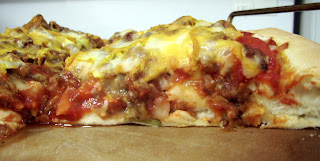 See, I did load it up! I think I went a little overboard on this one. I'll restrain myself on the next one.

We had comfortably full bellies and were awaiting the countdown. At midnight we had some bubbly. I was in a pink mood, so I bought this one. 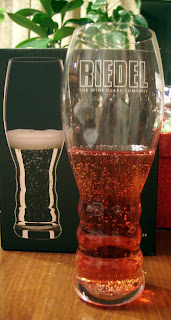 It's a decent, affordable, easy to drink cava. I served it up in these funky glasses I found a few months ago. Reidel makes wonderful glasses. They came out with a stemless wine glass line a few years back called O. I wasn't really taken with them but I love the sparkling wine glasses. It makes bubbly even more fun!

Someone just couldn't hang on until midnight. 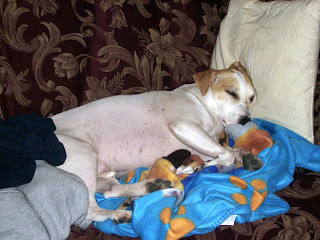 so glad that the surgery went well, and that you and Simon had such a fun New Year's (even though Simon missed the official stat of the new year, at midnight, haha).

you never said if you liked the pizza!

riedel is a bit of an expense, ain't it?

Kody partied with us on new years...of COURSE he stayed up becuase he woudln't settle down but the next day made for a great hangover day because all he did was sleep. : )

The pizza looks delicious! And what fun using your new mixer!!

Staying at home or doing something low key for new year's is certainly my choice as well (though sometimes I am dragged to parties by friends).