Thank you to Simon for taking over blogging duties for me for a bit. Things have been a little busy. Last week, I logged in 73 hours of work. Whew! This week will be less hectic with only 65.5 hours. Anyhow, onto food.

I had heard about this Gardein brand of vegan mock meat products. I don't remember where, but it was a while ago. Then one day, just as easy as you please, there they were on the grocery store shelf. A bonus - they're Canadian! 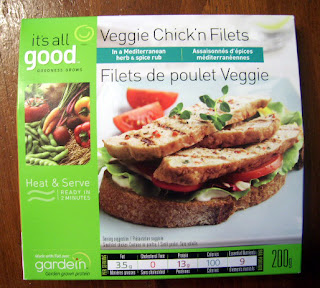 I picked up a package of the Chick'n Filets in a Mediterranean herb & spice rub for $4.99. It was only 200g. Ouch! There were about 6 or 8 "fillets" in the package, but they were small fillets. The first try, I just heated them up and ate "as is." Umph. Nothing special. I used the other half of the package making a chick'n salad sandwich with some Stonemill multi-grain bread, lettuce & vegenaise That was better. There are other flavours in the line-up, but I haven't given them a try yet.

A couple of weeks later, I was at Fortino's and I spotted this - 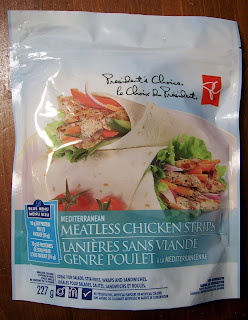 I picked it up to look at it and read the ingredient list and I saw it was made by the Gardein company for President's Choice. I found a much better website for them listed on the package. I figured I'd give them another try. I decided on fajitas with rice & beans.

I had this package of Vigo Red Beans & Rice I found at Ultra Mart. It was also something we hadn't tried before. There were 4 or 5 different kinds of Vigo products on the shelf, but this was the only one I found that didn't contain some sort of chicken. 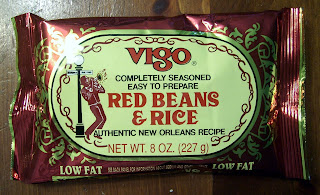 There was also a special on peppers, so I was able to get a variety of colours to make things all pretty. 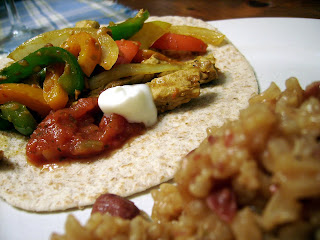 The strips were a much bigger hit in this dish, than the plain fillets were. I had whole wheat tortillas, some delicious Neal Brothers Salsa and sour 'creme'. 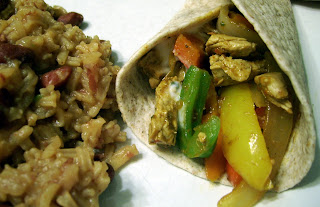 The fajitas were delicious! I think I ate one too many. 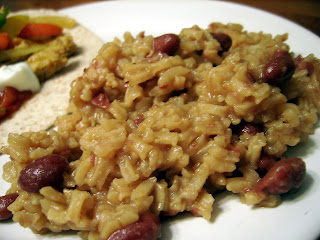 I very much liked the rice & beans too. I will definitely buy this again. It had a very nice flavour. Too much nice flavour I think. We were both too full for dessert. :o)

On another note - one that is sad, disgusting and downright horrific - Michael Vick & the dogfighting case. I am not a football fan of any sort, so I didn't even know who this guy was until I heard about the dogfighting. I am sickened beyond belief. You can sign an on-line petition HERE and another one HERE.

To lighten things up a bit after you've signed the petitions, head over to Sarah Kramer's blog and check out this post for her hubby. I think you have great taste Sarah!!
Posted by Carrie™ at 11:41 PM

I hope you work less next week. I also have a hectic job and have been doing a lot of quickie meals and have been using more vegan convenience foods than usual. But this post just goes to show you can eat well vegan even when you are insanely busy.

That's it. i am MOVING TO CANADA!!! Look at all the great food stuff you got. Nice.

Woot Woot! Lucky you! I've heard a lot of good things about the Gardein company. We can't get that product here in the US yet. :(

The Michael Vick thing makes me absolutely sick too. Thanks for the links to the petitions--I would be so angry if he got off the hook by being a professional athlete!

Looks like a lot of nice, simple summer meals. That's funny that Gardein makes stuff for PC - I guess that's just how it works though, eh?

is there such thing as one too many fajitas? i think not. :) thanks for stopping by while i was gone, i appreciate it

How are you feeling, Carrie? Less hot, I hope! We too have been melting in a heat wave, but I think you guys to the north have it worse! Stay cool and keep Simon cool, too!

Yikes! That is too much work.

I like to have some handy convenience food around, this looks great. I looooooove fajitas! I usually just make them with beans but the strips look good.

Hope things lighten up for you soon.

i'd make buffalo chicken wings with those strips. delish!

I miss that adorable picture you used of yourself as wee girl. It was too cute...although your still just as cute!