I've always liked chips - until a few years ago. I don't go for all the fancy flavours. I like plain, sour cream & onion or BBQ. A few years ago when I was trying to shed a few pounds, I stopped eating junky stuff. I hadn't had any chips in a couple of years. Really! When I was offered some - blech! They were so greasy and salty. My lips felt all slick and slimey. I was very disappointed. I didn't want chips any more. I mourned; but moved on. Then I discovered Baked Lay's. They weren't really like chips and they were incredibly salty. I liked the BBQ flavour better than the others and they would do in a pinch, but it just wasn't the same. 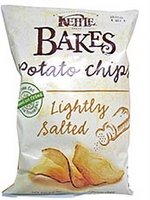 Yesterday, while I was shopping, I spotted these - Kettle Chips - BAKED! They were a little pricey, $2.99 a bag on sale, but I thought 'What the hey'. These are awesome! They look like potato chips (unlike the Baked Lay's) they taste like potato chips, but they're not all greasy and salty. They come in Plain (lightly salted) , BBQ and cheddar. I only saw the plain ones. They will certainly do for now. I have found my new favorite muchie snack! Move over popcorn, there's a new spud in town!

Carrie,
You asked me to come to your house to organize, but since I couldn't do that, I thought I'd just come over here and say hi!

I'm not a big potato chips fan, but dh likes them. We've gotten the BBQ one but have to watch out for the plain kind.

Kettles ROCK! I like the Sea Salt and Black Pepper ones! Only the bottom of the bag is greasy but it's Olive Oil...I believe...maybe Canola.

I love these as well!! I just got some JAYS when in Chicago... the BBQ one is very delicious. Kettles rule though....

Thank you for visiting my blog, I will be back at yours again and again!!!

Hello I want to congratulate to you. This site is fantastic, looks like entertained and very good to me it elaborated. I invite them to that they explore a little on my site of the Web
Our real estate listing includes great opportunities on Costa Rica Central Valley’s provinces such as San Jose, our Capital, with remarkable cities as Escazu at the west, or Curridabat at the east, experiencing a great development on both commercial and residential properties, making their real estate pricing highly attractive to investors; on other hand, Alajuela city gathers places with a very special warm weather such as Grecia, La Garita and Atenas, or beautiful farms for agricultural, cattle or nature preservation purposes as those located on San Carlos or Sarapiqui. We also offer land properties in Guanacaste, which is the province, along with Puntarenas, with the most beautiful tropical beaches on the Pacific Coast such as Tamarindo, Playa Grande, El Coco, Playa Hermosa, Nosara, Samara, Herradura, Jaco, Manuel Antonio, Dominical and Golfito, where the real estate business occupies the first place as the local economic activity.
Great investment opportunity at Costa Rica Pacific Coast, Preconstruction condos in costa rica ,Condo sales in costa rica, Retirement property in costa rica. Visit us for more info at: http://www.costa-ricarealestate.com/